In my continuing efforts to visit sites here in Ha Noi before I head back to the States, I give you 87 Ma May and Ðen Bach Ma…..
I figured I’d leave my house at about 11a.m., go to my favorite rice n’ point for brunch, then meander over to the Quarter and see the sites/sights. I thought by that time lunch hour (read ‘lunch 3 hours’) would be about over and I’d gain entrance to the places……well, think again.  Maybe I eat faster than I thought or I walk faster, but by the time I got to the first place, the staff were out to lunch, it was closed and only about 12:15….so I just walked around. Actually, I walked straight to a café….. 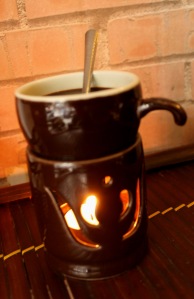 I like it when they serve the ca phé like this with the little votive underneath to keep it hot.  Pretty neat.  After my ca phé, I strolled around a bit, taking a picture or two and fending off shoe-shine boys (who wanted to ‘shine’ my Teva sandals!) while waiting ’til 2:00 when everything opens up again. 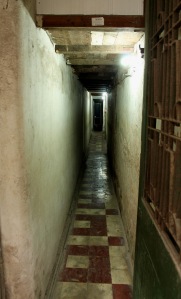 I like taking pictures like this ~ I’m just so intrigued by what’s down that alley or hallway!  What’s kind of crazy about it is that this hallway was super-duper dark, so I adjusted my camera to allow in more light.  It’s just so amazing to me how well the camera works to do just that…..and it’s mystifying, too!  I mean, I’ll do the same thing with the camera in another dimly lit situation and it turns out terribly!  Well, at least it’s a digital camera and I’m not wasting any film! 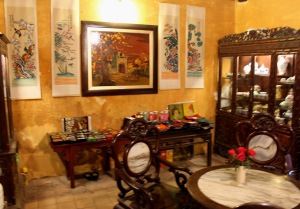 Okay, now 87 Ma May opened up.  Here’s what Lonely Planet says about it (copied directly from their website): “The traditional houses of the Old Quarter are a huge part of the neighbourhood’s appeal, but you’ll rarely have an opportunity to see beyond their shopfronts. Here, you can – this house is a beauty, lovingly restored and frozen in its late-19th-century condition. The woodwork upstairs is particularly impressive, and it’s surprising to see how effectively the courtyard creates an open, livable space.”   Well……. sorta.  I mean, there was indeed a lot of antique furniture, nice woodwork and it was interesting to walk through and see how it opens out into the courtyard (which I thought was the nicest area overall), but just about every square inch of table space was given over to tourist-trap stuff for sale.  I mean, I was in the Old Quarter ~ what did I expect, right?  Still, I guess it was a little disappointing and didn’t really have the feel of a home “frozen in its late 19th century condition.”  But, anyway, here are a few pictures of it. 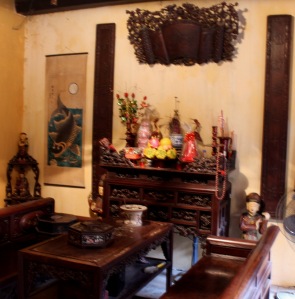 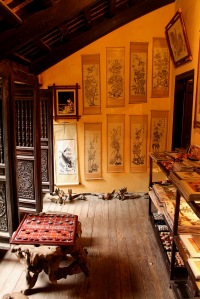 I did like the room on the right.  All those scrolls on the walls, the sloped ceiling, the game ready to be played….it had a nice feel. 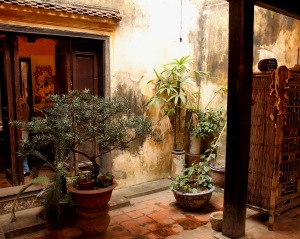 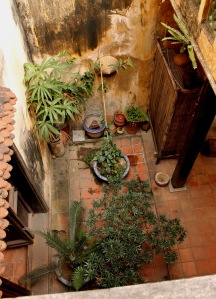 ….I love that this little fern is growing out of….what?…..cement…?

Now, Ðen Bach Ma.  Again, copying from the Lonely Planet website: “In the heart of the Old Quarter, the small Bach Ma Temple is said to be the oldest temple in the city, though much of the current structure dates from the 18th century and a shrine to Confucius was added in 1839. It was originally built by King Ly Thai To in the 11th century to honour a white horse that guided him to this site, where he chose to construct his city walls. Pass through the wonderful old wooden doors of the pagoda to see a statue of the legendary white horse.”  But first…….earlier, on my way to this area of the Old Quarter, I passed by this statue and took this picture…. 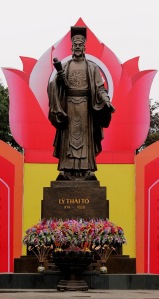 ….which just happened to be King Ly Thai To….

….and in the park-like area where it stood, were these tiles embedded in the ground…. 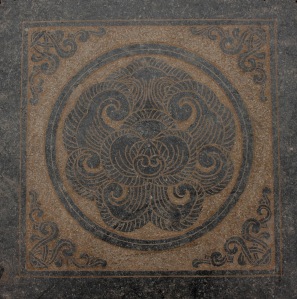 And now on to Ðen Bach Ma…. 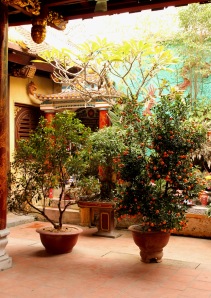 First you enter upon a nice, peaceful courtyard.

Then you enter into the temple…..where the ornamentation is veritably overwhelming.  Many temples I’ve been to are like this to one degree or another.  It can be pretty mind-boggling! 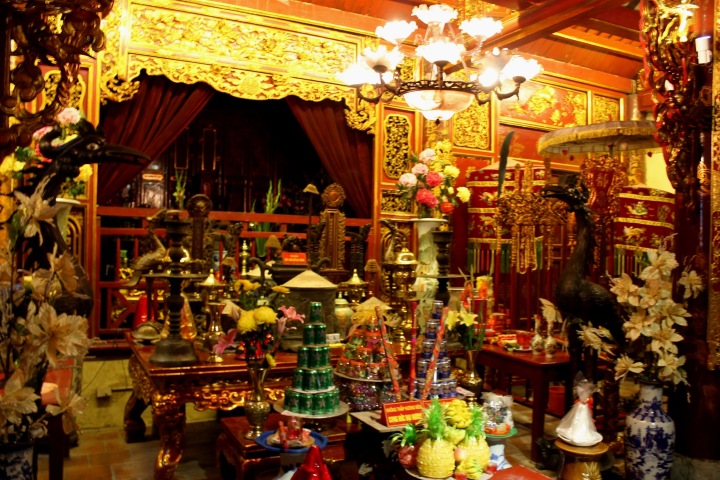 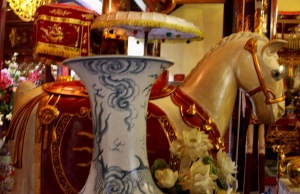 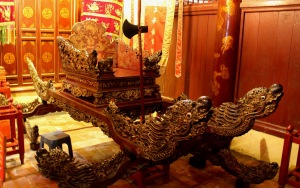 ↑ To the left is a palanquin for carrying royalty (with the obligatory blue plastic stool underneath, just so you know you’re in Viet Nam!) and to the right are swords and shields and ceremonial artifacts you see in lots of temples. 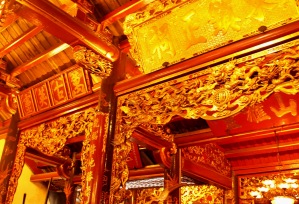 Food and drinks are always offered at temples for the ancestors……I guess the ancestors like Tiger Bia and Heineken..! ↓ 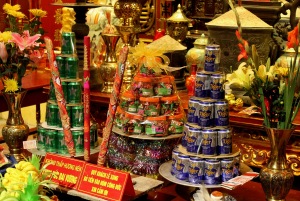 ↑ ↓ A couple of beautifully carved shutters…. 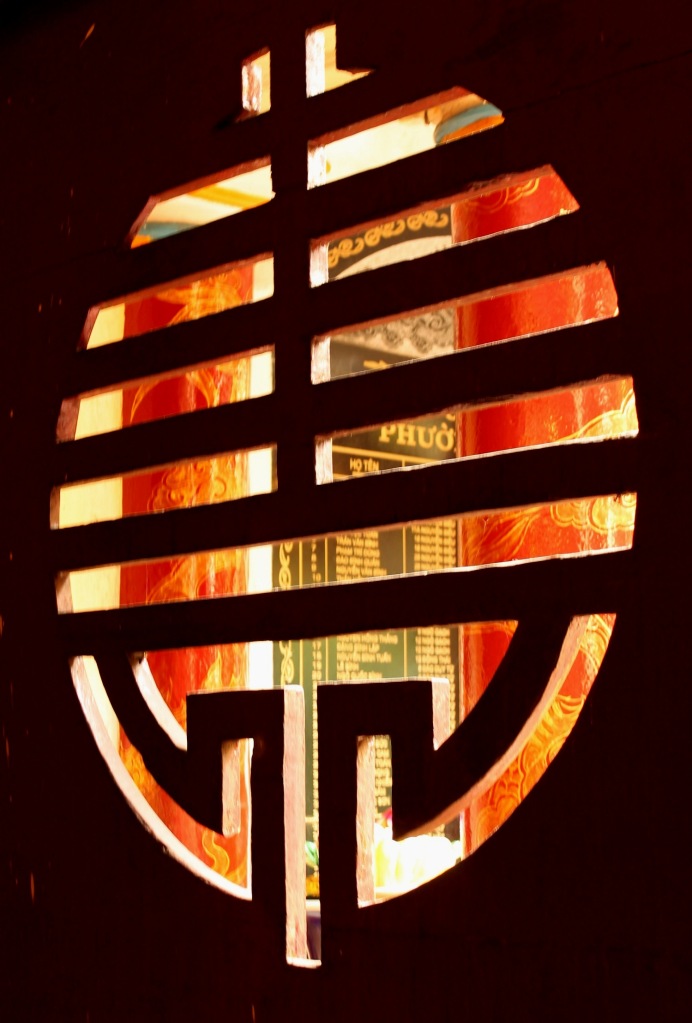 So, there’s 87 Ma May and Ðen Bach Ma.  After visiting these old and older sites, it was particularly weird and funny to see these thoroughly modern sights on my walk home…. 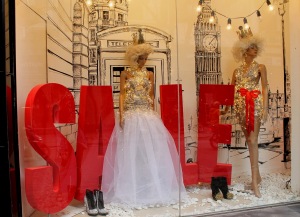 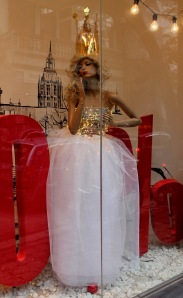 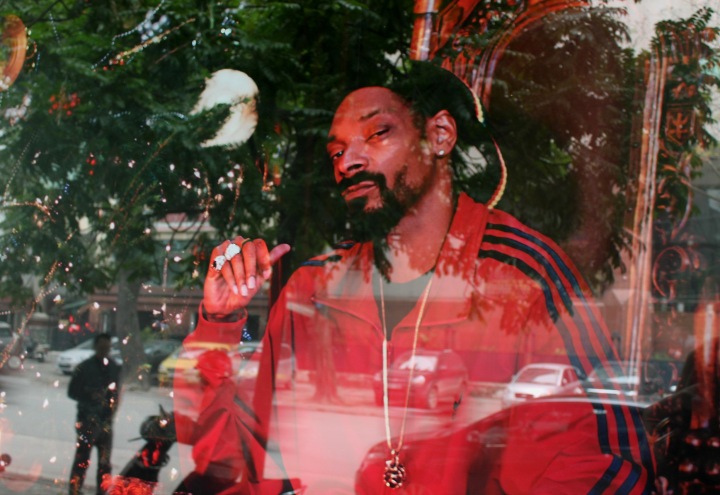