Hello, there. It’s been a while. I’ve been in Northern California (mostly Oakland) since around the middle of March, staying at the home of my wonderful, beautiful, kind, generous friend, Lin. Often I’ve been planting and playing in her lovely garden or sewing or, from time to time, going out and about.

You know, when you’re not ‘traveling,’ I mean really traveling – going to far and distant lands – you don’t think about sharing your adventures. They don’t seem much like adventures. I’m a Californian. I’ve been living these past few months in California… it’s just normal and doesn’t seem like that big a deal (though being with friends and family has been absolutely great).

But a friend reminded me that, though my homeland may not seem all that new and interesting to me, it may to someone else who’s never been here and that sounds like a fair enough reason to write about it. Besides, there really are some interesting sites around here, many of which I’ve been able to see thanks to BART (Bay Area Rapid Transit).

I love BART. It’s really convenient and is mainly how I get around (plus a bit of AmTrak and Greyhound). So, before I head north to Oregon soon, I’d like to show you a few of the places I’ve got around to….

Downtown Oakland, with its buildings new and old. Below is the “Sheet of Paper Building.” At least, that’s what it’s been nick-named. It was made this narrow in order to be flexible in an earthquake. It is known to sway in a strong wind. I guess the people who work there would have to get used to it, though I think it would be difficult.

Nah, I made all that up. It’s just the angle from which the picture’s taken.
Anywho…..
Here are a few of the older buildings in town along with a part of Chinatown. 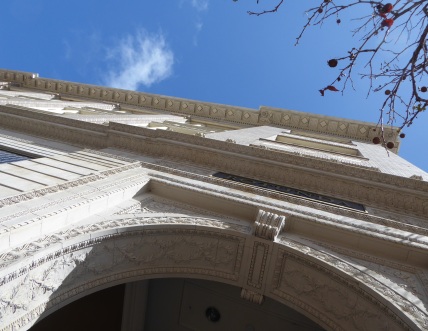 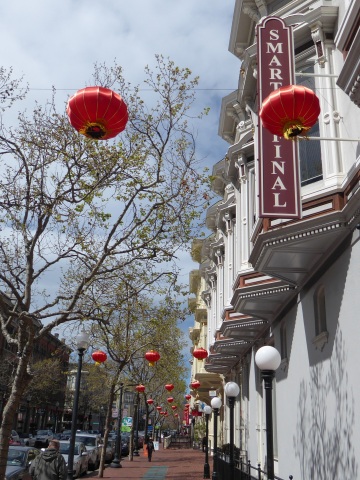 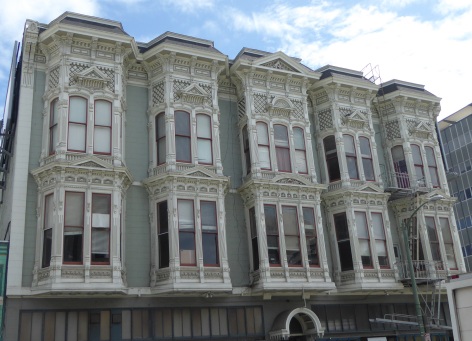 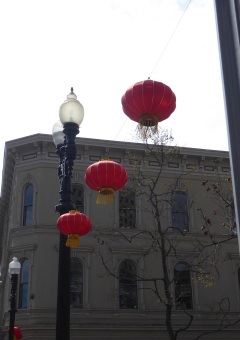 I made a couple quick trips over to Sacramento and Chico for a few days to see some friends, none of whom I remembered to photograph, by the way. I’ve always been pretty bad about that. But, when I’m with friends, I’m talking with them and enjoying their company. I’m not thinking about capturing their image. It just doesn’t occur to me. Anyway, it was fun spending time with some very dear friends.
Whenever I go to Chico (or even think about Chico, for that matter) I think of Duke’s Crazy Taco.

See that little hole in the wall to the left of the word “Crazy?” That’s where you can buy the most amazing burrito on the planet – the ‘Super Crazy Vege Burrito with everything on it.’

It may not look like much, but it’s the most delicious, sloppy, filling burrito anywhere.
Oy, I want one now.

Back in Oakland, I house and pet sat (sitted?) for a friend near Lake Merritt for about a week. Here are a few photos from that area of town.

It’s a very pleasant walk around the lake. 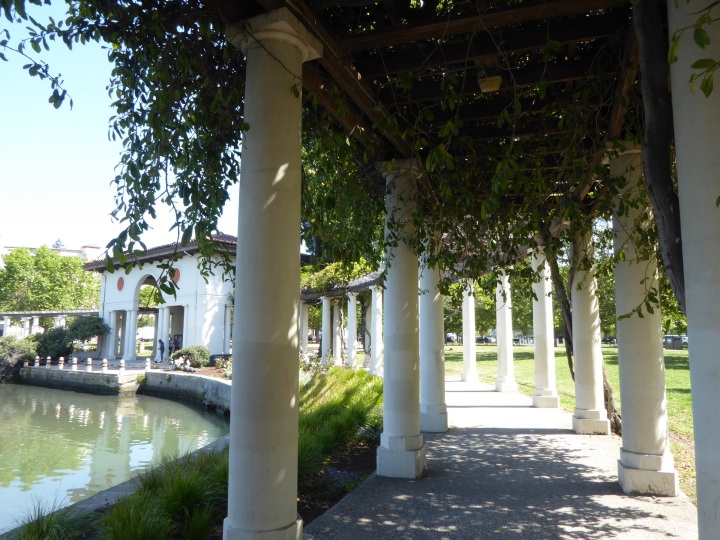 There’s a botanical garden just west of the lake that’s fun to explore.

A small stand of Sequoias. I love being anywhere near these trees. They smell lovely and are so majestic. 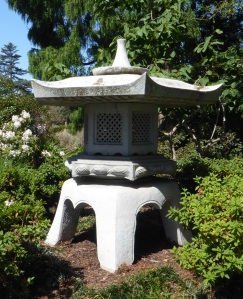 I thought this (below) was a pretty clever use of an old satellite dish. 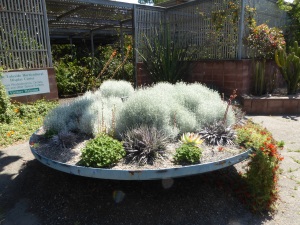 And these ‘eggs’ are made from stacked slabs of ceramic. Really beautiful work and clever idea, too.

Just as in Buenos Aires (which I wrote about in this post), I found some (actual) street art.

And here is, perhaps, a shadow of art.

Oakland (and the Bay Area in general) has a history of political activity. Soon after the Parkland School shooting, there was a protest in Oakland for gun control. Here are a few pictures I took there. 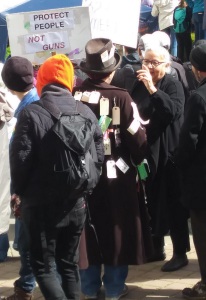 Young and old, there were lots of people talking and debating. 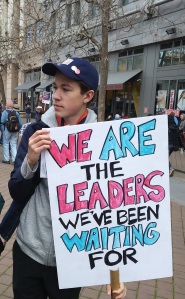 I love the sign this young man was carrying.

I was a little surprised to see this sign. But, hey, everyone’s got a right to their opinion.

One of the signs I saw, but couldn’t get a clear shot of was being carried by a couple young girls. It said, “If teachers have to carry guns, Presidents should have to read.” Brilliant. 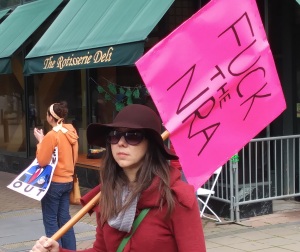 I love this one. I mean, let’s just say what’s on our mind, shall we?!

I spent some time at the Oakland Museum and here are a few of my favorite parts, starting with California’s distant past. 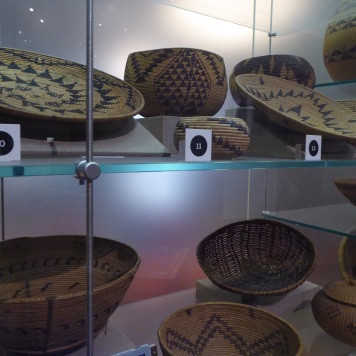 Baskets. I love baskets and these are beautifully crafted. These were created by the Ohlone tribe.

Then, whoops, here come the “Distant Travelers” to take over the place.

From the museum’s information plaque: “The late 1800’s were a dark time for California’s Native population. As more and more settlers moved onto California lands, Indians lost their rights, their land and their lives. Between 1846 and 1865, California’s total Indian population plunged from 150,000 to 25,000. Surviving Native people worked for minimum wages on ranches and farms.”
The harsh reality. 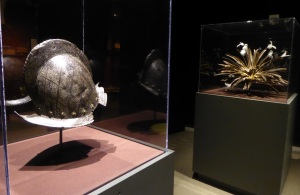 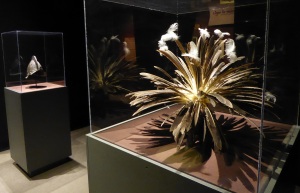 Guess whose is whose…. 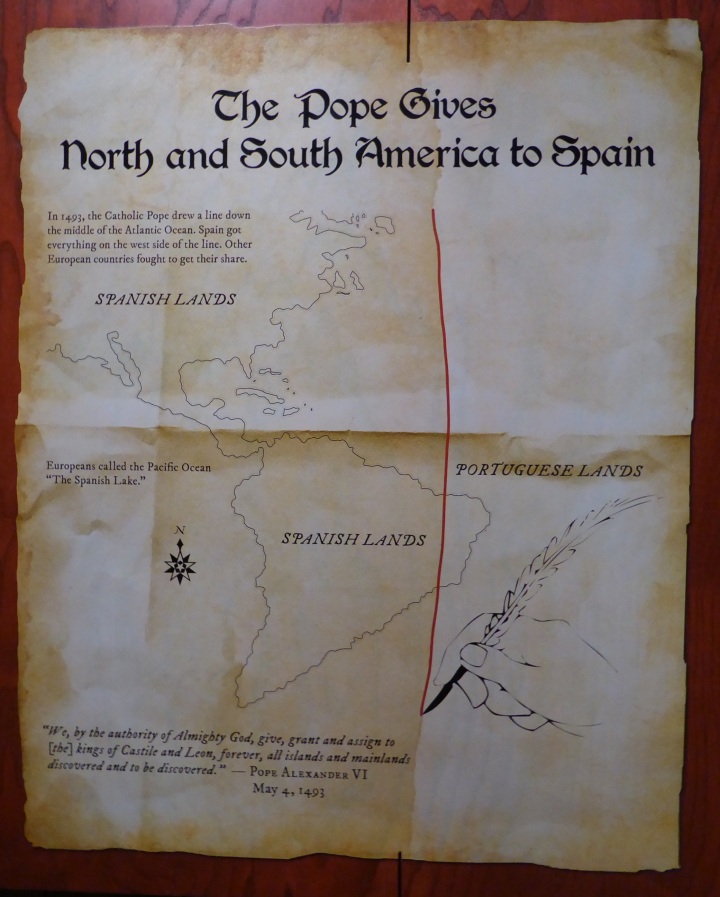 Well, that was generous of him, wasn’t it?  Sheesh.

There were small exhibits regarding the great earthquake of 1906….. 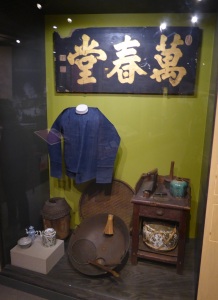 ….and Chinese immigration (along with that difficult history).

But, honestly, my favorite part was the area depicting the 1960’s/70’s, because I remember a lot of it! 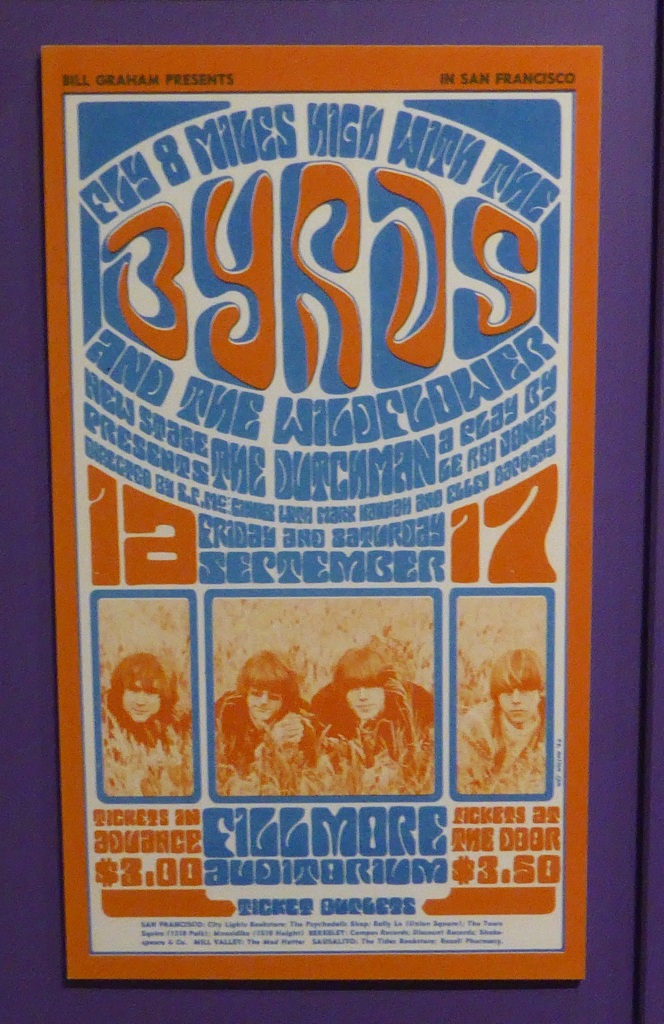 I thought this one was funny. I was never a Reagan fan, although he’s a mere piker compared to the Embarrassment in Chief we’ve got now (oh, are my politics showing?). 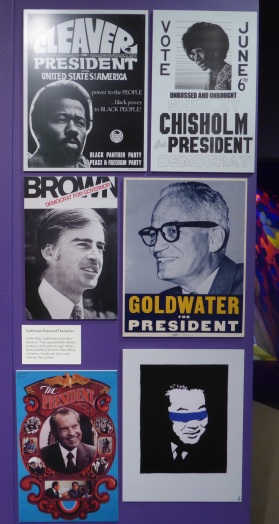 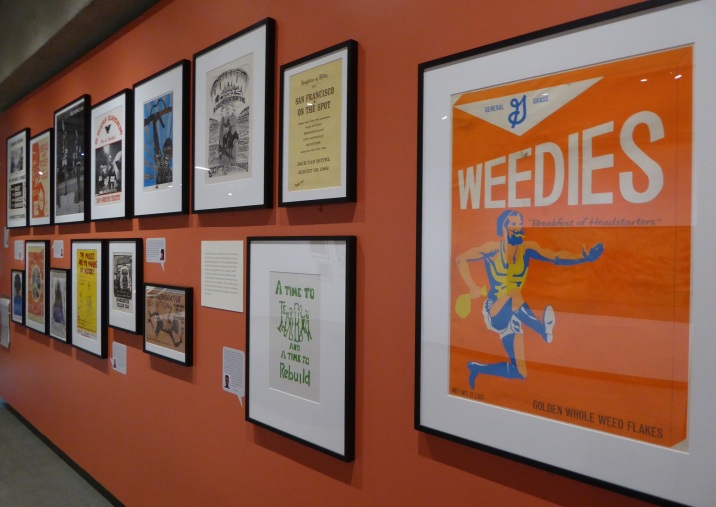 Being a needlecrafter and all ’round artsy-craftsy type, I really liked these pieces.

And here are two of my favorite paintings.

This mirror cube was fun to play with.

Notice how it not only reflects my image, but reverses it and flips it upside-down!

Last, but not least, here is a piece by a woman named Ruth Asawa. She created this by crocheting copper wire. Amazing concept and incredibly well crafted.

There’s much, much more to the Oakland Museum, but these were my favorites.

I do love Oakland. Probably largely because dear friends live here, but also because it’s a lively, active community.

I look forward to coming back soon.