What words can I use to describe Hoi An? Certainly the word ‘charm’ comes to mind. Then there’s relaxing, friendly, laid-back, architecture, flowers…..lots and lots of flowers…..
As I’d said in my last post, Mike and I took a couple of day trips to Hoi An. It’s barely a half hour motorbike ride from Da Nang down a clean, fairly new highway. On our first visit, we left relatively early (for two people on vacation) and hadn’t had breakfast so we stopped at the nicest little riverside restaurant for a delicious meal. 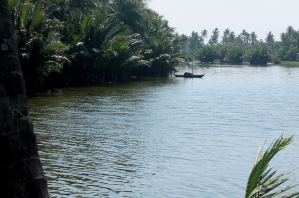 Mike wanted to stay by the riverside and I wanted to explore the town a bit, so I rented a bike while he stayed at the restaurant and studied his Vietnamese.

Here’s my bike and my little companion (see the spider just about dead-center?!).  As we rode in we’d passed this rice field so I circled back on the bike to get these shots of some herons.

This field was virtually neon green! 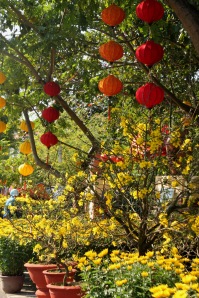 The streets were lined with flowers for sale.  During Tet, Viet Nam is overflowing with flowers.  Every house, every apartment, every hotel, everywhere….flowers….

I just adore dahlias↑  They aren’t known for their fragrance, but if ‘green’ has a smell, it’s a dahlia.

Having made my way to what I’ll call the center of town (actually, it was really just the more touristy area, but hey,…..I was a tourist…) I walked and rode around, took pictures, stopped in a few shops.  I even tried on some clothing at a few stores.  Hoi An is famous for the clothing it makes and sells.  In fact, you can be fitted for pants or a dress, even a suit, and pick it up within a day or so at an incredibly fair price.  From what I’d seen, the craftsmanship was excellent.  But that day I didn’t find anything…..

……except maybe a few pretty things to photograph. 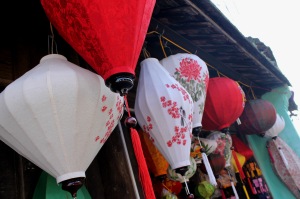 These lanterns were for sale everywhere.  I wanted to buy every one! 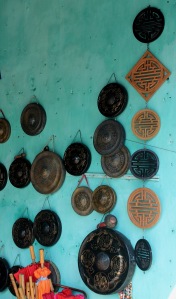 I really love these gongs that were for sale, too.

So, just strolling around, I saw this wildly decorated pagoda.  There are so many of them here in Viet Nam.

I love this old French architecture…..lots more of that to follow on our second visit….

I found myself at one of the many waterways which lead to the ocean.

You could hire one of these boats for a little tour.  Might be kinda fun.→

I’d been out and about for a little while and had quite a long bike ride ahead of me, so I decided to make my way back to the restaurant where I found Mike hard at work studying his Vietna……..

…..well, he was on vacation, too……  Can you imagine doing this at any restaurant back home?  Here it’s không sao (no problem). 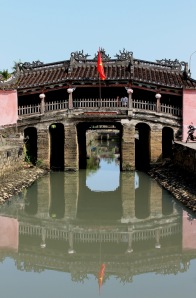 On our second visit to Hoi An we found the Japanese bridge.  I’d hoped to see it.  On my first venture into the area, I just hadn’t ridden my bike far enough.  Being on the motorbike, we were able to traverse a wider area.  When we came across it, we stopped for some breakfast again and, following our previous routine, Mike stayed at the restaurant and I went off to take pictures…..this time on foot.  Here’s what one website says about the bridge: 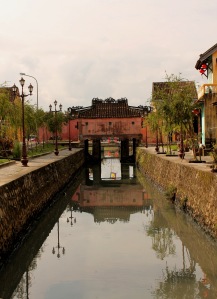 “The Hoi An Japanese Bridge remains a symbol of the significant impact that the Japanese had in the region. The bridge was originally constructed to connect the Japanese community with the Chinese quarter – separated by a small stream of water – as a symbolic gesture of peace. Although his work has been appreciated for centuries, the builder of the bridge still remains anonymous.”

And another website says, “Without question, the most famous Japanese bridge in Vietnam – if not all of Southeast Asia – is found in the historic riverside town of Hoi An.  Constructed sometime in the early 1600s, the Hoi An Japanese Bridge is a symbol of the town and a beautiful reminder of a time long ago.” 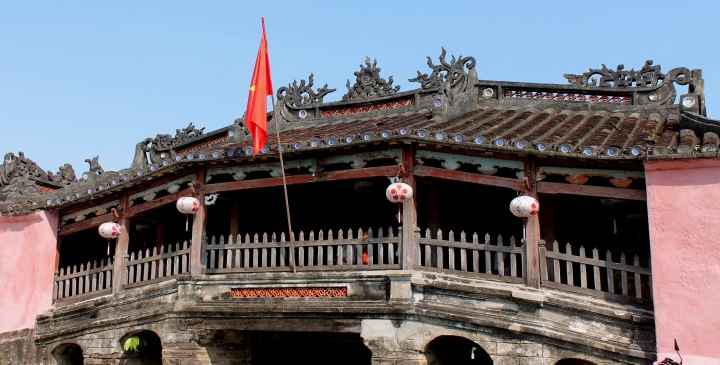 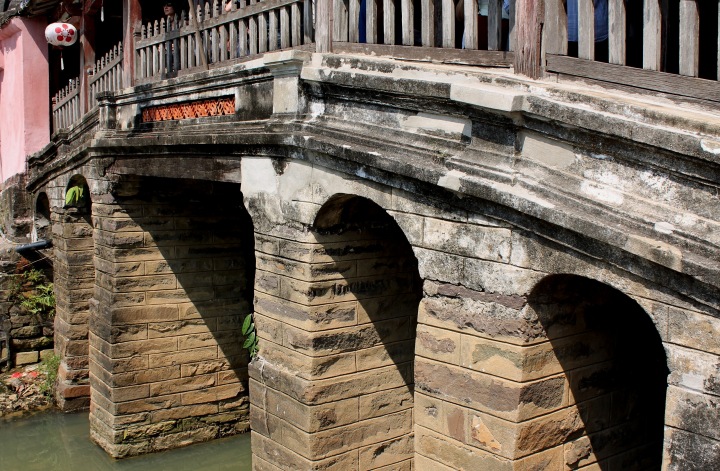 Pics taken on the bridge itself.

↑ This was taken inside the little room that’s off to the side of the bridge.  I love the old, mottled colors on the wall.

From there I pretty much just strolled around for a couple of hours, taking pictures….mostly of the beautiful old French architecture.  Oh, and I tried on and bought a couple pair of pants and two cashmere scarves.  Gorgeous! 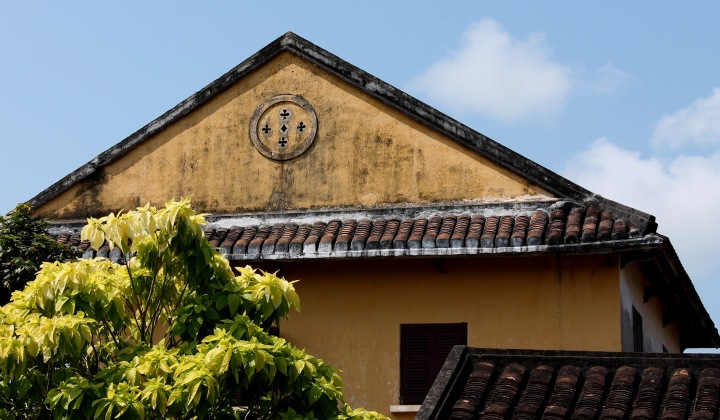 Back by the riverside this lovely lady  graciously allowed me to take her picture. 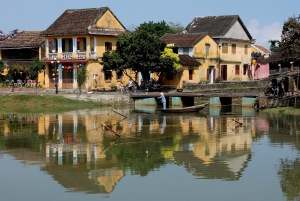 Mike and I strolled around together for a bit and watched this man for a while.  He’d lowered an enormous net into the river then used his feet to turn a wooden wheel (or a spindle?).  All the lines were interconnected to that one main line and it drew the entire net out of the water as he turned the spindle (thanks for the description, Mike). 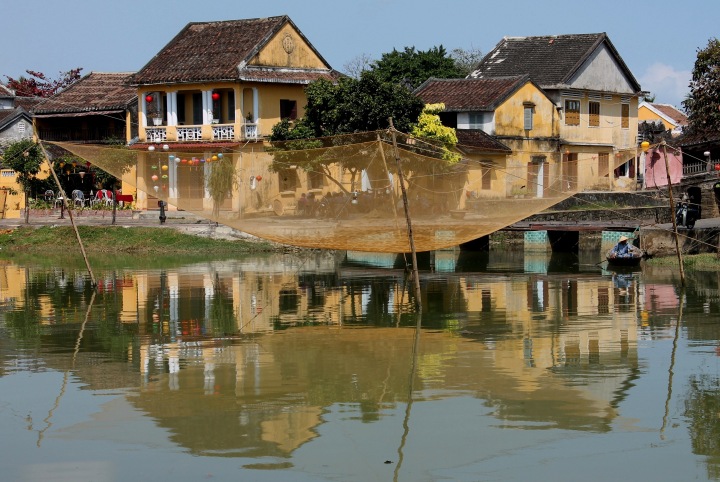 ←This is the year of the Snake.  I thought this sign was pretty inventive!  And I love this fish.  It’s carved from wood and was being used as a light fixture.  Very cool. ↓ 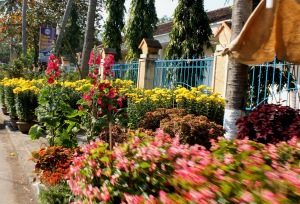 Coupla ‘back of the motorbike’ shots….. 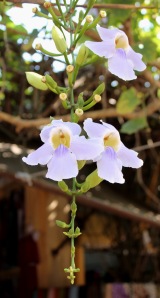 One thought on “Hoi An”