Essentially, I’m jobless. Well, nearly. I do have a Sunday morning job with some little kids, but my ‘main job’, my main source of income, has ended. The term is over. I may still be able to pick up work here and there (I hope, I hope!), but, yeah….jobless. Feels weird.
For the rest of this month, I’ll be trying to get around Ha Noi and see as many sights as I can without spending much money. Shouldn’t be too hard, really.  Most everything is very cheap here.
Anyway, here is a taste of a normal work day for me….. 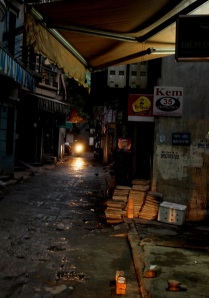 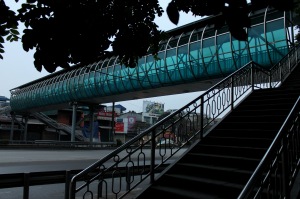 At the end of the alley is an incredibly busy street and I used to cross it on foot.  But after I sprained my ankle I became much more hesitant about it….and if there’s anything you can’t be when you’re crossing streets in Ha Noi, it’s hesitant.

So, I go a little out of my way (not far at all) and cross over the street on this foot bridge. 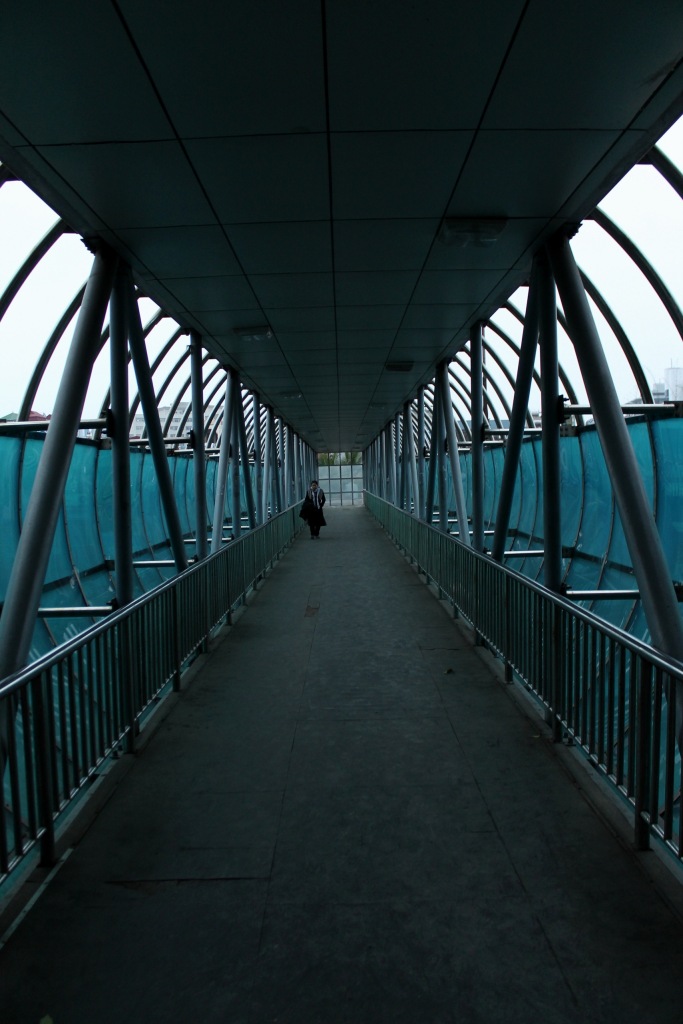 I meant to take a picture of the street in the afternoon when it’s super busy, but I forgot.  I’ll show you in another post.  It’s not that busy early in the morning as you can see ←here….. 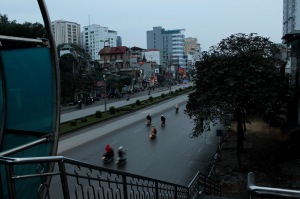 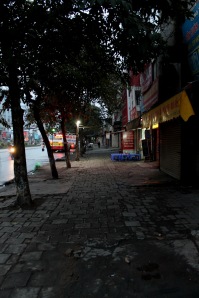 This sidewalk is normally jam-packed with street vendors, motorbikes, street food restaurants and people….but not this early. → 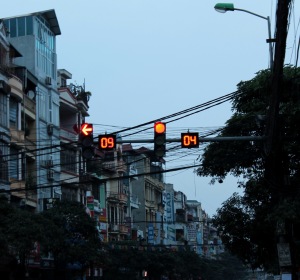 I won’t show you my whole walk to work.  I’ve posted lots of pictures of the streets.  But I thought I’d show this picture of the street lights.  They have ‘timers’ on them which count down the seconds ’til the light changes from green to red or vice versa.  I think it’s a really good idea….though most people pay no attention to them!  They start going before the light turns green and they keep going through after the light has turned red!  Ah well…..it’s still a pretty good idea! 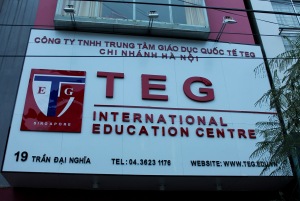 So, here’s work….but the doors aren’t open yet.  In fact, sometimes the doors don’t open until after it’s time for class to start.  We’re on VN time here!  Generally, I’d say most people here aren’t overly concerned with being on time….sooooo…… 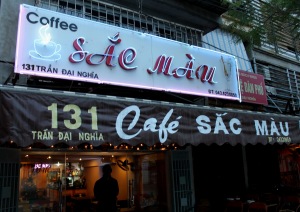 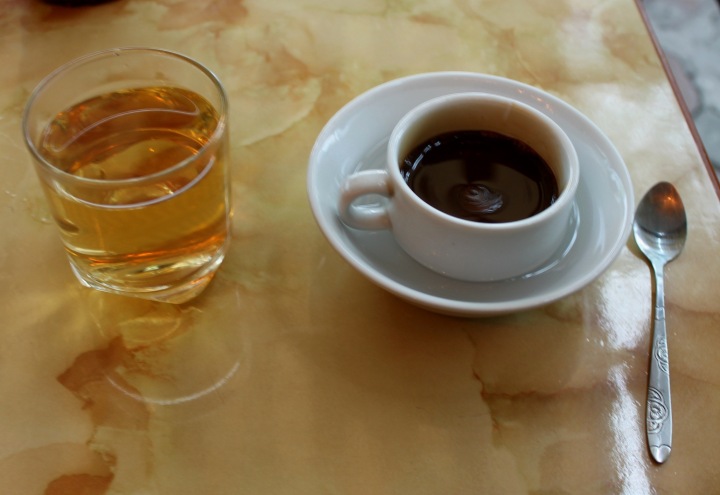 …….coffee……or, rather, ca phé sua nong…..or nau nong……or strong hot coffee with sweetened condensed milk……or hot, liquid candy bar!  They are so addictive and delicious.  They always serve tea with the coffee.  Either strong tea or weak tea….this tea is somewhere in the middle.  Very refreshing.

Here are a couple of the young gentlemen who work at the café.  Just as soon as they see me walking down the street, they yell, “Madame!  Café sua nong!”  and I say, “Vang, vang, cam on!”  (Yes, yes, thank you!). 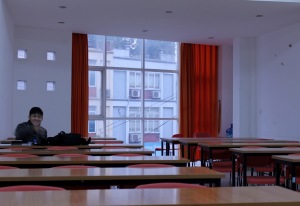 So, now school’s open and the slow process of student arrival begins!  Like I said, being on time is just not a big priority here!  But this young man is almost always on time.  He is great.  Really smart, very eager to learn, always wants to talk and practice his English. 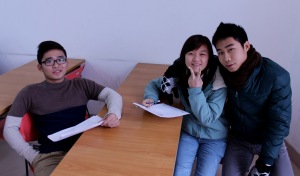 Here are a few pictures of students in my morning class.  I’ve set them to work on writing stories in separate groups…..although the young man on the right decided to follow me around and be in every picture….! 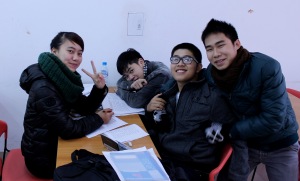 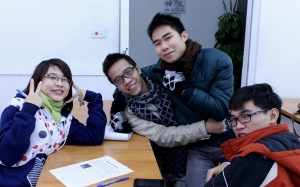 These are just great kids.  Period.

And here they all are together. 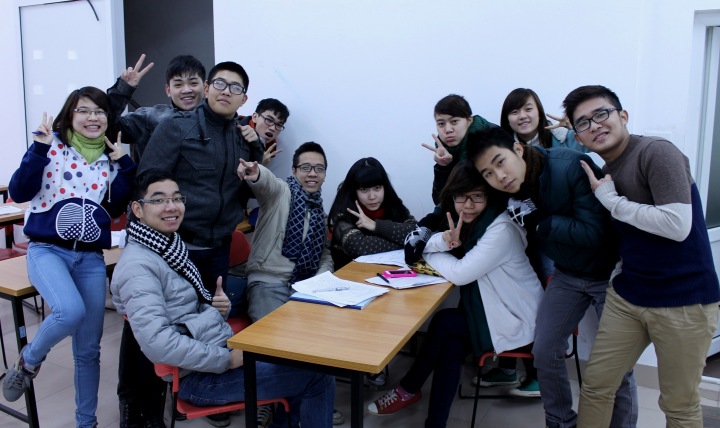 Gonna miss them.  A lot. 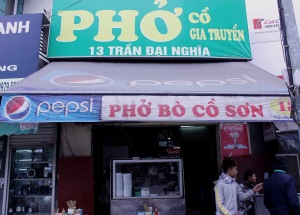 So, now it’s time for lunch.  This place is right next door to the school.  Very handy.  They advertise for pho, but they also serve com rang (fried rice) and I love it.  Again, they see me coming and start cooking…… 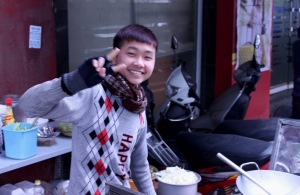 ….and here’s the young guy that does the cooking. 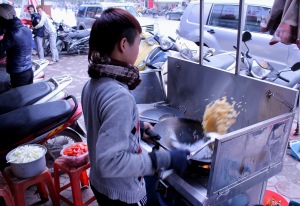 He was really fun to watch….and to listen to, actually.  He really got a rhythm going with the wok and spatula!

And he creates this……. 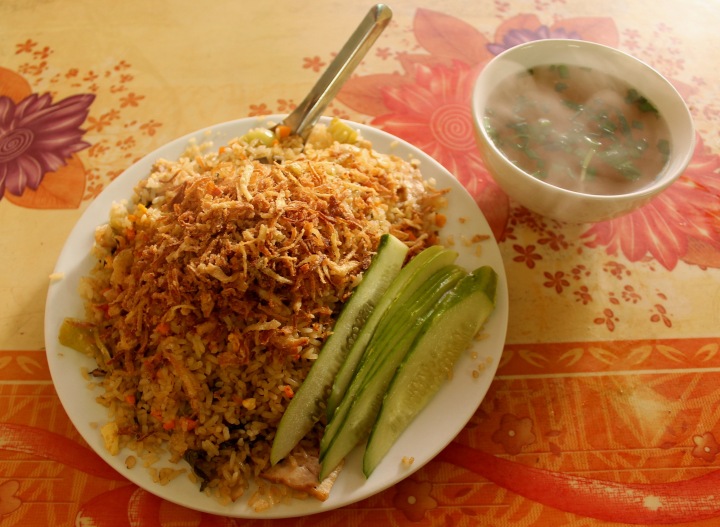 ….oh, so yummy.  Topped with fried, dried onions, with a side of slightly pickled cucumbers.  Soup is almost always served with dishes here.  It’s really hit and miss. I’ve had soups that were pretty awful and untasty, but this soup is positively delicious…… all for $1.25.

Most days, I go back for a midday café topper, then off to my afternoon class….. 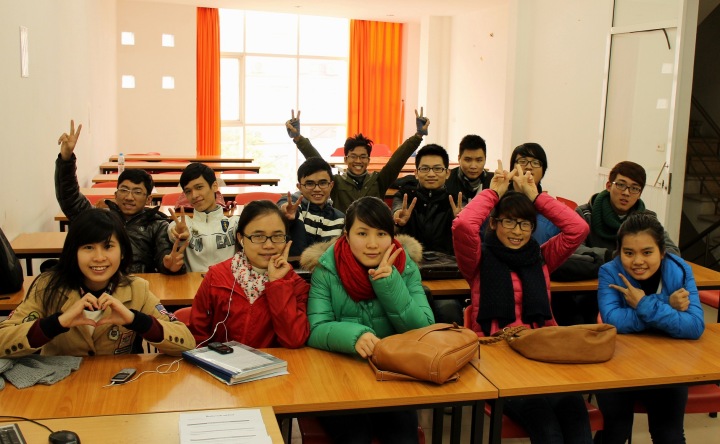 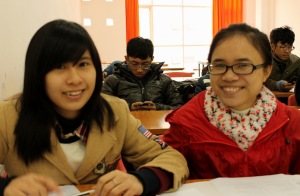 These two girls usually sat right up front next to my desk.  They were great.  The girl on the right is so studious and serious about learning English and she’s really sweet.  The girl on the left is a comedian!  They made a great duo!   Oh, and the boy behind them is hard at work on his mobile phone! 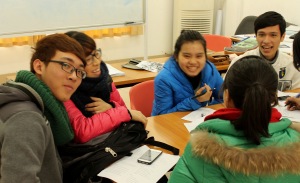 Here’s a group working together.  The girl in blue is another great student and real sweetie.  The girl in pink was a darling….as was the girl in green!  There were lots of sweeties in these classes! 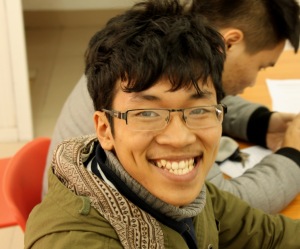 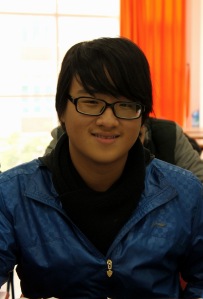 Here they all are together at the end of the last day of class.  I don’t know whose idea it was, but they all decided to ‘salute’!  It was so cute.  I saluted back, of course.  I am really going to miss these kids.  They are just absolutely great human beings.  So full of life.  So full of energy.  So full of hope for the future.  I wish them all the very best for their lives. 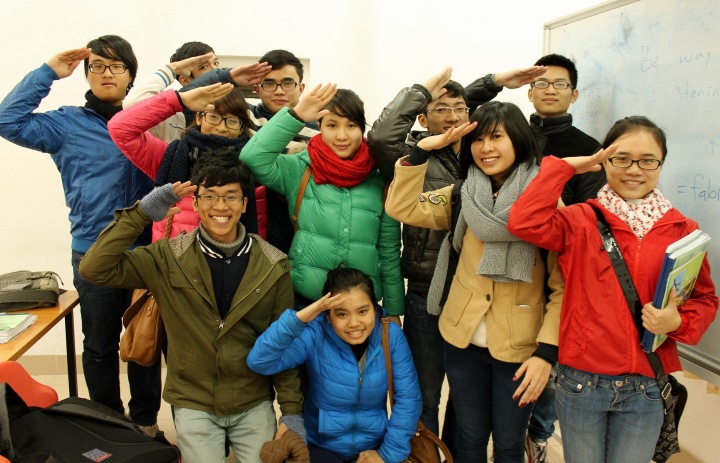