I’d said in an earlier post that when I have time, I’ll post some pictures of the Thai Binh School ‘summer camp’ at Do Son Beach in Hai Phong Province.  Well, I’ve got a bit of time right now, so here are some pictures…… 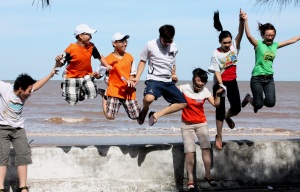 …..a few happy kids upon arrival!

We arrived late in the afternoon and of course there was the usual checking in (I have no idea why they called it summer camp – we stayed in a hotel!) and getting settled.  So by the time I thought about taking another picture, it was evening. We ate outside at a restaurant and I saw these ships shining brightly out at sea.

The following morning I took these pictures of the sun rising from the ocean in the east…..nothing too extraordinary about that…..unless you’re a Californian and are used to seeing it setting into the ocean in the west.  Kinda cool!

Later that day we were scheduled to go to a sort of resort island…..I guess that’s what you’d call it.  There really wasn’t anything there I’d call a ‘resort’, but it was still kinda fun.  Anyway, we took a bus out to the dock where we saw the boat we would be taking…..or thought we’d be taking. It was pretty big and was the first boat we saw, so everyone assumed it was the one we’d board……….

……..you know what they say about assuming…… 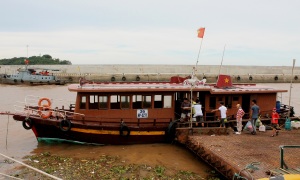 ……here’s the boat we took….cute, huh?  Actually, I thought it had a bit more character.  This little boat’s been around!

The ride out to the island was very rocky and bumpy.  All the kids were screaming and laughing.  It was a pretty wild ride!  This kid was cracking me up ~ he was screaming louder and longer than anyone else. 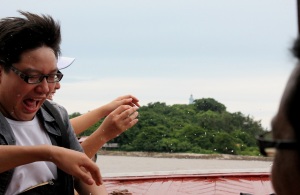 Once we docked, we had to climb into and through the two boats pictured below to reach the shore.

Double click on the photo and see the lighthouse all the way to the left of the picture poking up through the trees…….. 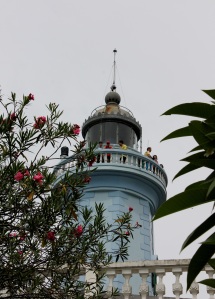 To the right is the old reflector…. thingy…. whatever it’s called….. on display.  Really cool looking.

You can actually crawl inside it, which I did and took these two pics….. 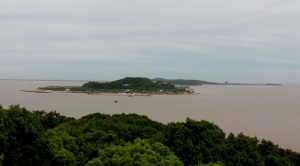 Here’s the view from the top of the lighthouse.  That’s mainland Vietnam in the distance and, yes, the ocean is brown here, too.  Just very, very silty sand that’s always stirred up. 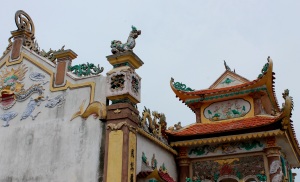 Here’s part of a pagoda that’s on the island………

……and here’s one of those incredibly beautiful bells you see in many of them.

I wandered around on my own quite a bit when I wasn’t assigned tasks with the students.  I went butterfly chasing, basically!  As the butterflies were leading me further and further into the jungle, I realized I needed to watch out for spiders….here are a couple…… 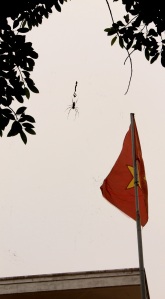 I don’t remember whether or not these spiders were the same size as the one that was in my kitchen.  I have to say, though, that even if they were, they were outside where they belong and not hanging out by the refrigerator, so they weren’t quite as scary…..still amazingly big, though!  So, off I went chasing butterflies….. 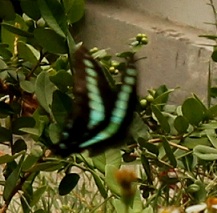 At least you can still see the pretty colors.

So, while I’m running around chasing these little guys, I’m keeping my head up so I don’t run into any spider webs, you know?  Am I thinking about looking down?  No, I’m not…….and that’s why this 6″ long beast had the opportunity to crawl over my foot….. 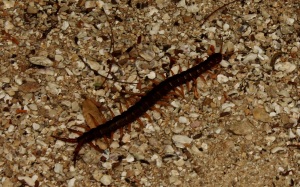 ….sooooooo, my butterfly chasing adventure coming to an abrupt end, I strolled back to join the rest of the group….

……where we enjoyed this yummy lunch.  After a few more activities with the kids, I took off in search of more picture opportunities. 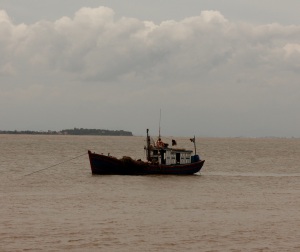 Here are a couple of fishing boats I liked the look of…..

I’ve edited my description of this day quite a bit.  I took a bajillion pictures and everything happened at a pretty fast pace……  I’d like to post more pictures, but it does take some time.  I have to resize each one so it’ll upload (….download?) onto the site. Overall it was a pretty nice trip and a much needed break from the school.

One thing I’ll always remember about this day that really touched me:  A girl, probably around 18, took me aside and said she had a question she wanted to ask me, but didn’t want anyone else to know. She said she thought I was the only person she could ask.  The question was about pronunciation.  She asked, “How do you say the word that’s spelled B-E-A-C-H and how do you say the word that’s spelled B-I-T-C-H?”   I chuckled and said, “Well, yes indeed, you really do need to know the difference in pronunciation between those two words!”  I looked around to be sure we wouldn’t be overheard and gave her a private English lesson!   I will never, ever, ever, ever, ever tell a soul who that girl was.  Her secret’s safe with me!  I just thought it was really cute!