From Lisbon, I took a train to Sintra day before yesterday.

This is the train station in Lisbon from which I departed.
I remember thinking at the time, “Wow, I get to go through those doorways!”
Beautiful. 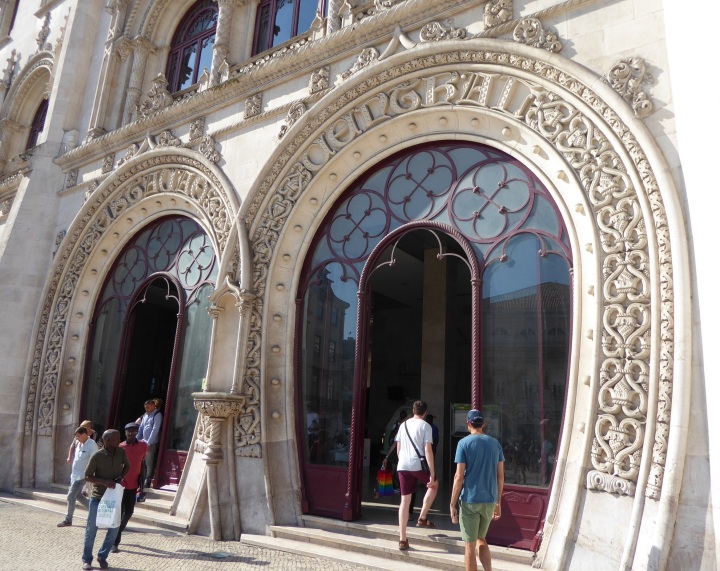 Here are a few first impressions of Sintra.

Below is part of the ‘Historic Center’ of town which is very touristy (said the tourist). 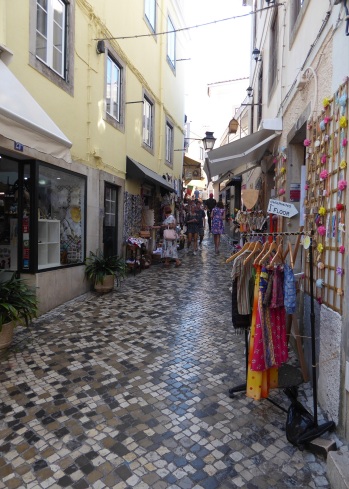 But, it’s still charming.
I had heard about the Moorish Castle and wanted to see that. I’d also heard there was a bus that could take you up to it, but from the Historic Center, I couldn’t find the right bus stop. So I just started walking. Up. To get to the Moorish Castle, just go up.

I don’t know what this is but thought it was a nice view.

A church in a quiet neighborhood along the way.

If you’ve read this blog for any amount of time, you’ll know that I love old doors. I surely wish folk wouldn’t put graffiti on them. These doors have such a beautiful patina.
Onward and upward… 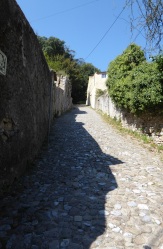 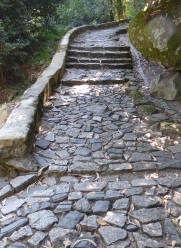 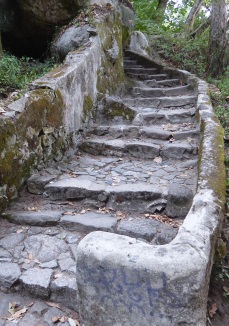 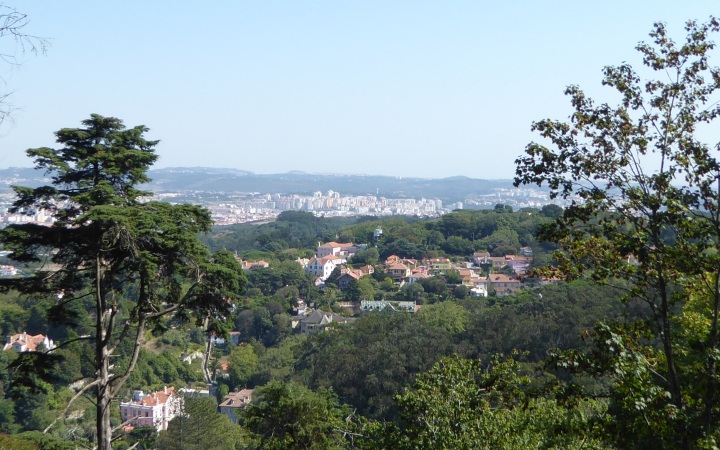 Finally (oh, my god, finally!) I made it to the gate of the Moorish Castle… where I was to begin an even steeper climb. 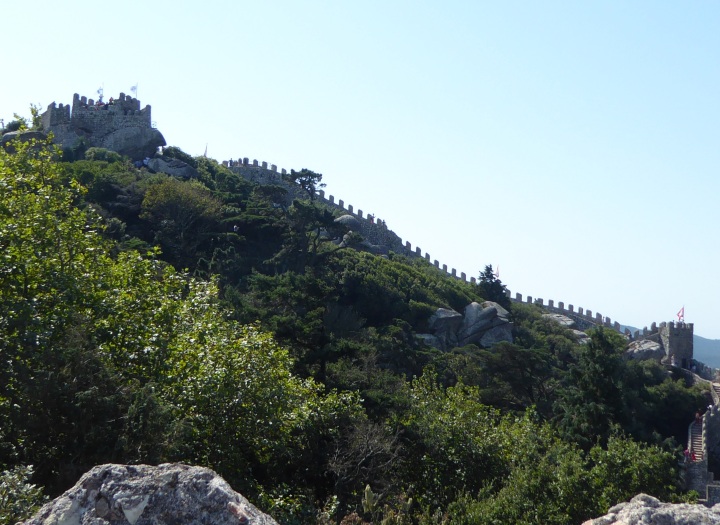 I have to say – if you’re ever here, take the bus up to the gate. 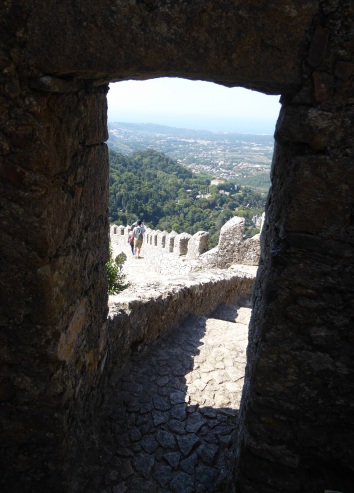 I could’ve taken a bit more time to find the bus station, but, no, thinking I’m a badass, I decided I could just walk it.

Brilliant. By the time I got to the gate, my water was running low, but I still thought I had enough. I didn’t. It was an ungodly hot day, my face was dripping sweat (my ears were actually popping from the steepness of the climb!) and I still had it in my head that, “Well, I’m here, I’ve got to finish this climb!”

Badass or idiot? Hhhmmm. I’m sticking with the badass angle…. but just barely. 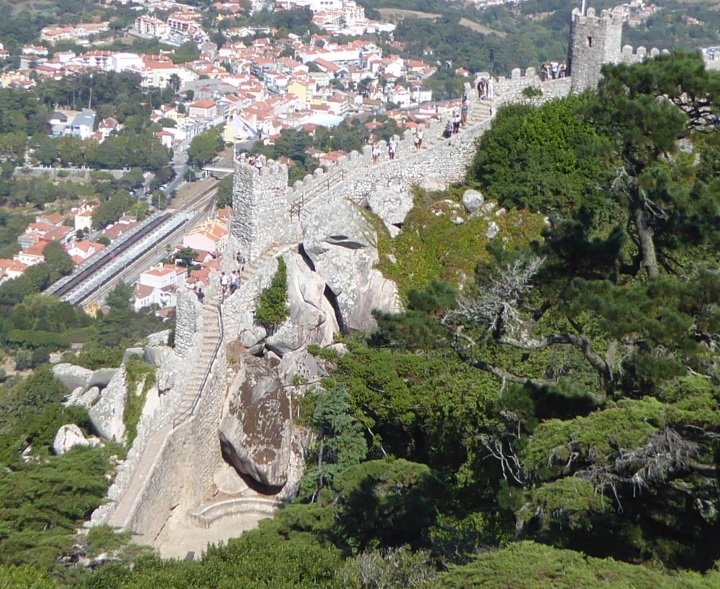 Got to admit, though, it’s a pretty nice view. 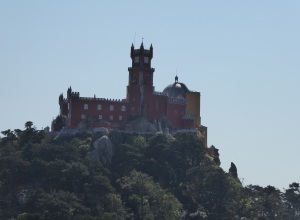 Across the valley is another castle called Pena Palace. I spoke with a few other people who’ve gone there and they have all compared it to Disneyland! Well, I’ve seen Disneyland a time or twelve so I can do without seeing this castle!

Here are a few pics from my tromp back down the hill. 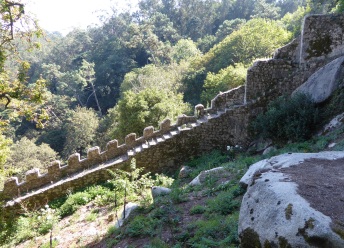 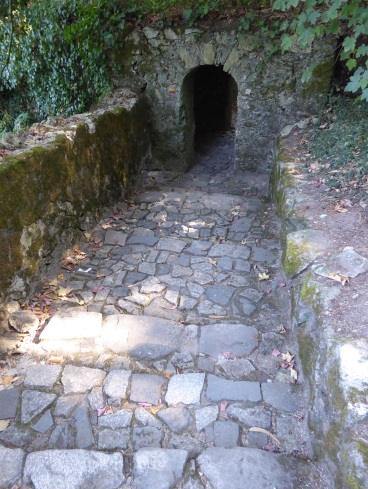 This is the ceiling of the tunnel pictured just above.

Another quiet little area along the way.
Back in the Historic Center I took these pictures of the plethora of ceramics that are available for sale. 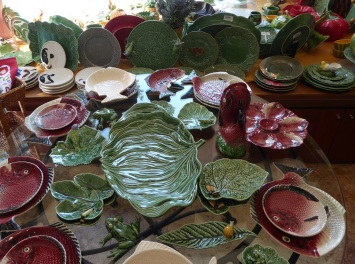 As tempting as all these beautiful ceramics were to me, the real difficulty was walking away from this gorgeous piece of fabric.

One last look for the day up to where I’d just been. 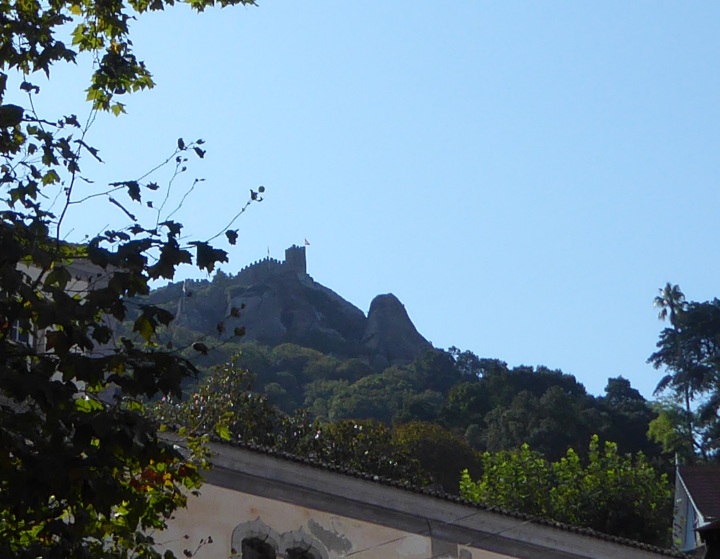 The next morning (yesterday) when I woke up, I noticed some red rash-y looking spots on my legs and arms and my first thought was ‘heat rash.’ I mean, after the day before, what else could it be? I was in the crazy hot sun with not enough water (I think I’m back to taking the ‘idiot’ stance). Anyway, I thought I’d take it easy and just walk through a nice nearby park.

Very quiet and tranquil. Not a lot of visitors here.

Seating for a sort of playing field in the park.

Another sight I would like to see is Monserrate Palace so I asked a policeman if it was nearby and he said that, yes, it’s just right around the corner – about a 10-15 minute walk. Well, not quite. I did walk in the direction he indicated, though, and came upon a beautiful building which I decided would do for the day. It is called Quinta da Regaleira. I think it’s known as much for its gardens and grottoes as it is for the main house which was built as recently as 1904, surprisingly enough. 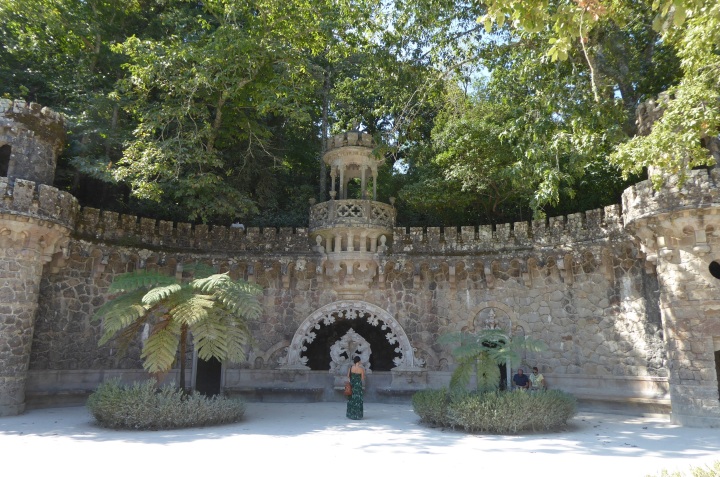 This is simply a part of the extensive gardens. Not so shabby, eh?

I couldn’t help taking pictures up to the Moorish Castle whenever I saw it and thinking, “Geez, I was up there yesterday!”

This is part of the grotto. It was so wonderfully cool inside. Natural air-conditioning – lovely!

Inside the grotto, still. I suppose I should have climbed these stairs, but I was at a point I didn’t think I could take one more step upward!

There were a lot of people on the stairs as well. I just couldn’t make myself do it. 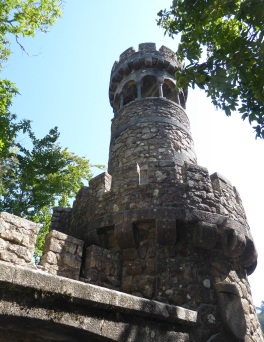 A detail of the ‘bench’ I particularly liked.

Above and following are the ‘house’ and some details. 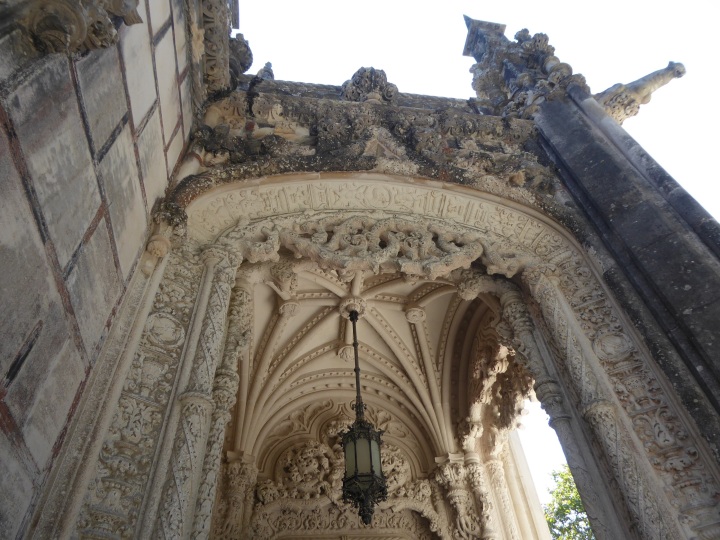 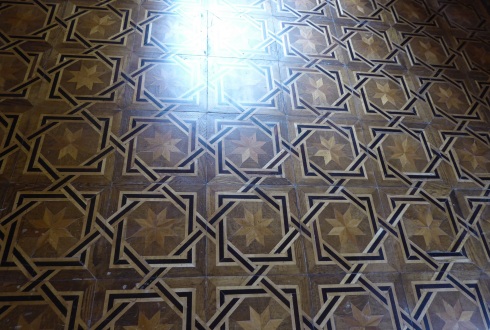 I really liked this window (with its view of the Moorish Castle at the top).

Finally, walking back to my hostel I saw this…. I don’t know…. bus stop? Rest area? Just stuck into the side of a hill. 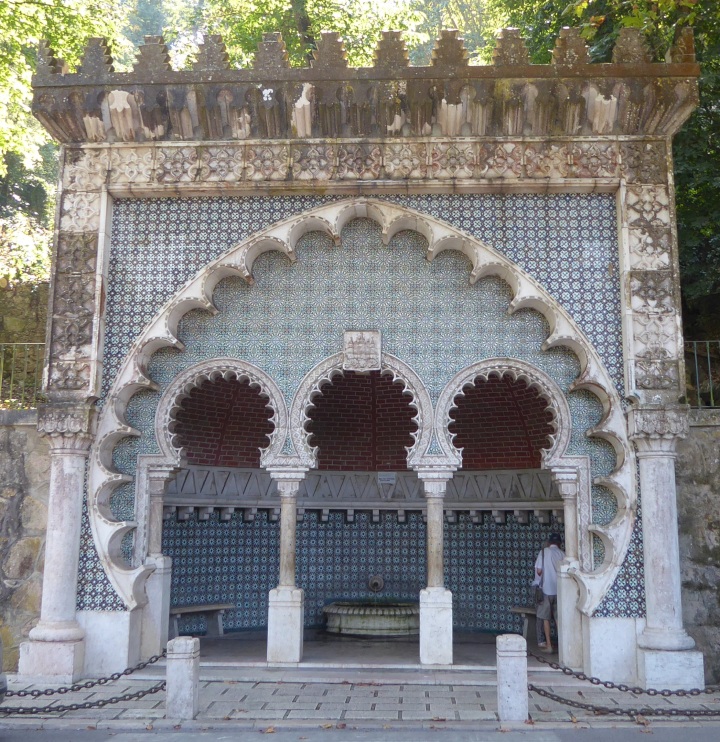 Wow.
And here’s a bit of public art I really liked.

So, these were my first two days in Sintra. I’ll be here a few more and still hope to find Monserrate. In a day or two I’m hoping to take a trip out of town to somewhere I’ve really been longing to go. In the meantime, I’m totally taking it easy. No sunshine, no heat.
So, signing out for now…
your friend,
‘Badass with a Heat Rash’