I had to look back at my last post to see if I’d really said it – that the overnight bus ride would be a breeze. Yes I certainly did say that. Ha ha ha…. oh, silly girl.
It was pretty damned rough. Eighteen hours straight from Buenos Aires. No stops. Not a one. Dry, starchy food and barely any water or caffeine (which still seems to be affecting me two days later). Part of that, at least, is my own fault for being a caffeine junkie, but still, water? They do call them sleeper buses, but I surely didn’t sleep. I’m tall and those seats are not made for tall people. Just an FYI. Anyway, it was a really looooong 18 hours.
But, I can say (after a couple days recuperation) that overall, it was worth it.
Iguazú Cataratas (Waterfalls) was beautiful. But I had the same reaction when looking at my pictures that I’d had after my Grand Canyon visit: Pictures just don’t capture it. It’s way too grand.
But I’ll share my pics with you after a few tidbits and oddities. 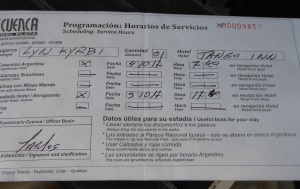 This is my bus pass. I think my first name is so uncommon here that it’s just given up on. Also, the spelling of my last name is often like this. I kinda like it – I think it’s growing on me.

Every bus has them. 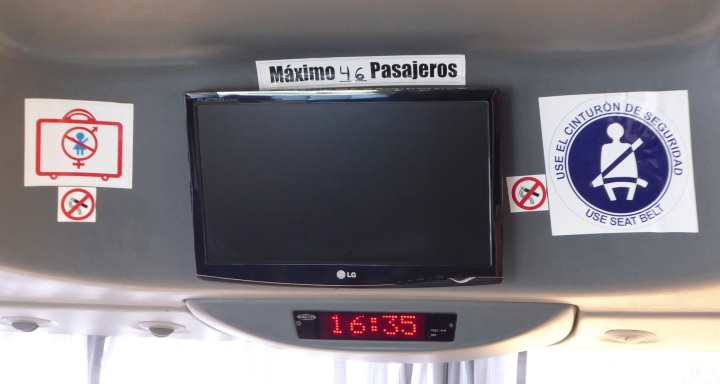 Those signs that describe the rules without words. But this one really caught my eye…

At first I laughed, thinking, “No kids of any gender in the luggage!” Then it dawned on me, this could really be a problem! Yikes. 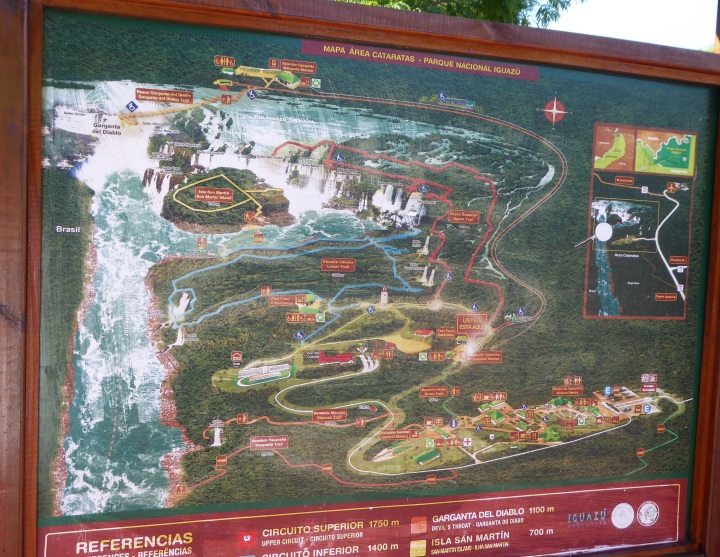 I don’t usually do tours. I don’t like the time restraint. But, I think sometimes it’s a good idea – even if you have to hurry along. You get information from the guide, but more importantly (for me, anyway), you don’t get lost.
This area was huge. Above is an overall map of the area being shown to us by the guide.

We took about a 15 minute train ride up the hill. The falls are only about 640 ft. / 195 m. above sea level. Here we’re waiting for crosstown traffic.

One thing more I’d like to say before I show you the waterfalls….

Just a point I’d like to make about travel. When you’re traveling, take pictures, of course. But be there. Before or after you take your picture, stop and soak it in for a bit. See it. That may seem obvious, but in the moment, it’s sometimes easy to forget. You see another view that you want to photograph and another, and another. Photographs are great, but no. Stop. There’s a reason you went to this place. Stop and enjoy it. I could be wrong, but I think that’s what you’re going to remember when you’re old.

Now that the introductions and niceties and lectures are taken care of, I give you Iguazú Cataratas. 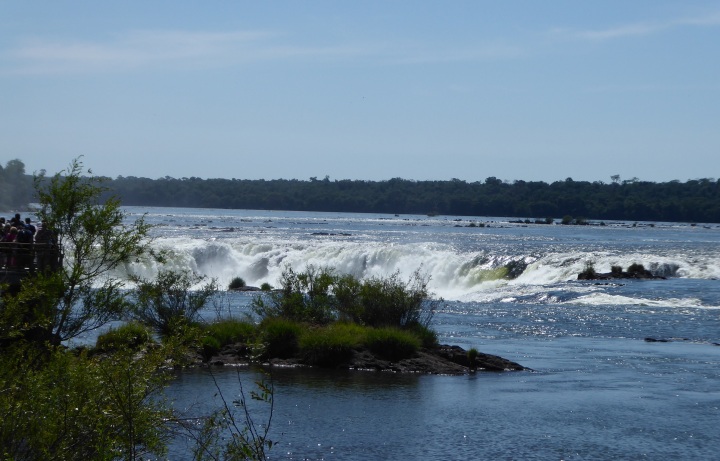 This was my first view of the falls. 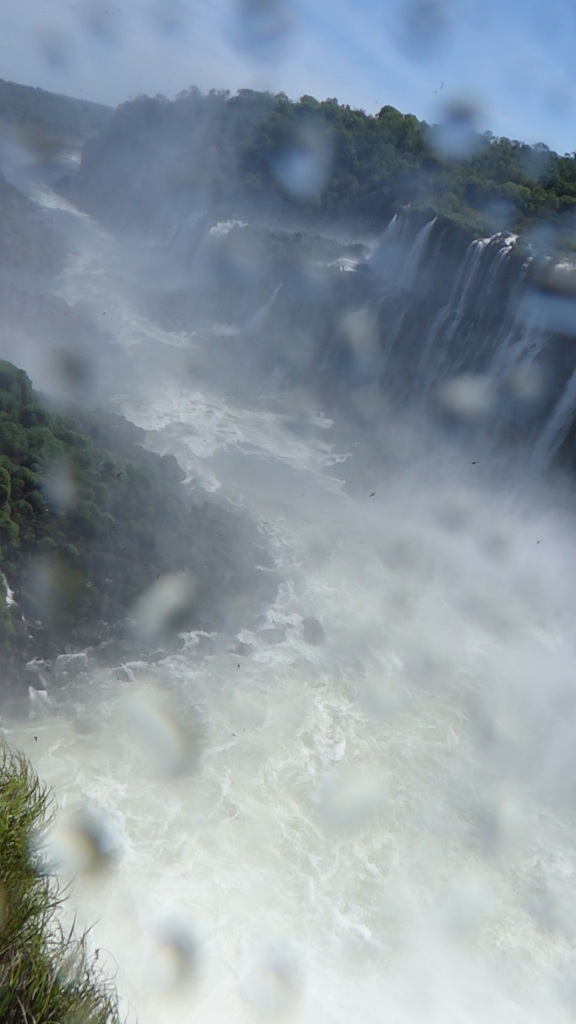 It’s the power that gets to you first. It’s breathtaking, incredible, mind-boggling, staggering, fill in your adjective here ___________.

What also gets to you is the instant shower.

Actually, it’s pretty nice. Before going, I’d bought a plastic raincoat thingy and didn’t even bother to use it when I was there. It was refreshing. But I’m surely glad my camera survived the experience. That was pretty stupid on my part.
By the way, that’s Brazil behind me. 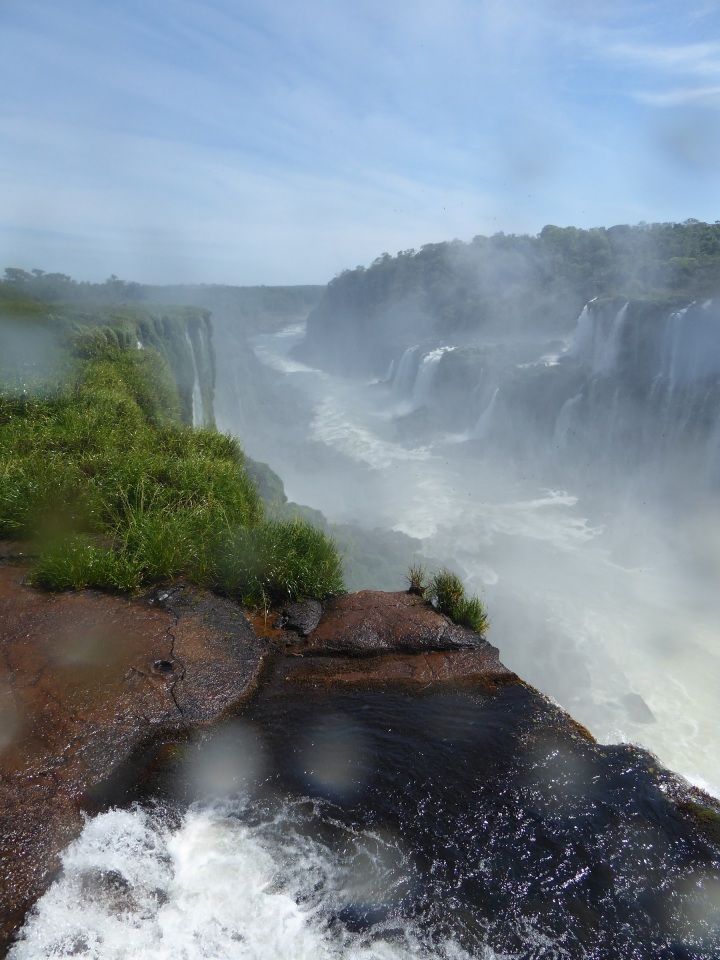 The noise level at this stage was pretty dang high. 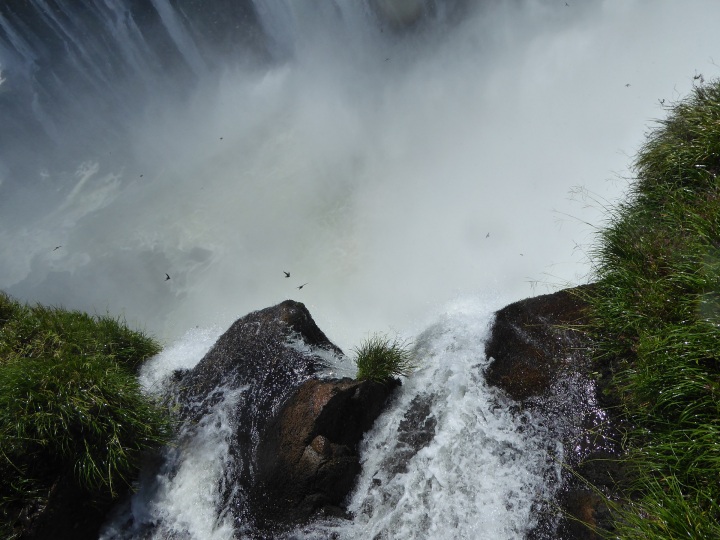 Those are starlings flying around in the mist.

There was plenty of walking on this tour given that it’s so huge. But I got to see some pretty cool things along the way.

This is a coati. There were lots of them around. Unfortunately, at the tourist center, people feed them and they’ve become exceedingly used to humans.

This is my first sighting of a monkey in the wild. (You may need to click on the picture to get a better view).

It went on and on. As you saw in the photo of the map, this is not just one, centrally located waterfall, it’s huge. 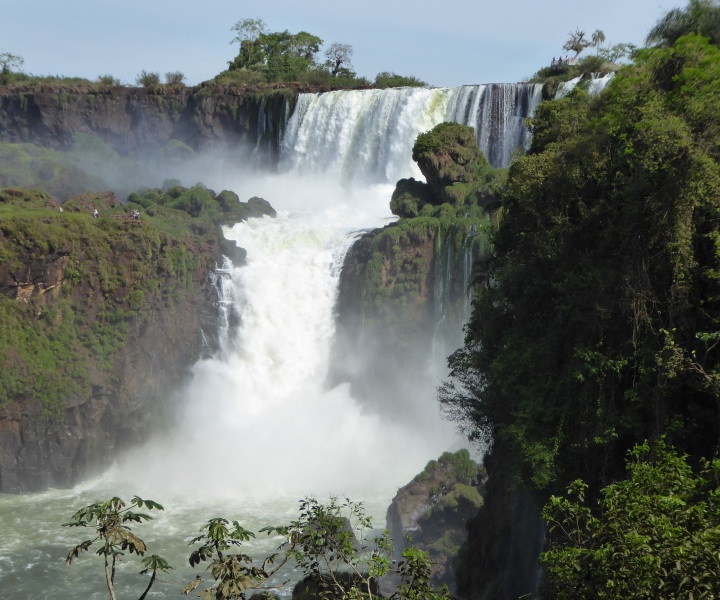 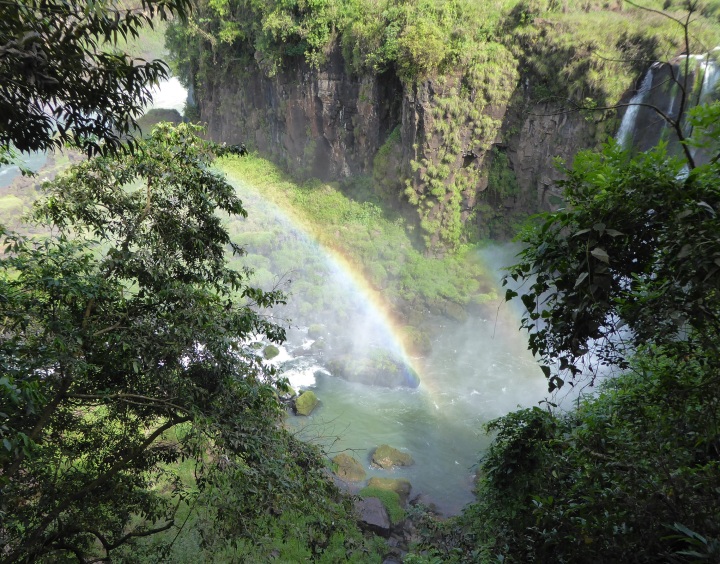 You can take a boat ride that goes very close to the falls. I would have loved to do it, but I won’t, here in this blog post, go into the gory details of why I didn’t. But if you’re curious as to why, I direct you here.

There’s so much more I’d like to show you that I saw in this area. I have lots more pictures of the falls, but I think this is fairly sufficient. But I’d like to show you the animals. I went to an animal hospital that’s in the jungle (this area is sub-tropical). They’re really doing some good work there. I’ll write about it another time.

My recommendation? Go to Iguazú Cataratas if you can (and then to the animal hospital). It truly is spectacularly beautiful. I don’t know what flights there are like (price / comfort), but I’ve got to say, I don’t recommend the buses very highly. Still, if you can go, Go!