Whew! What a day!  So, from Carlsbad Caverns we drove to Albuquerque where we spent the night in a random parking lot.  We didn’t see much of Albuquerque.  It seemed like a very sprawled out city.  Anyway, then we drove to a KOA campground in Holbrook, Arizona.

Nice scenery along the way.

The Grand Canyon State has a whole lot more than the Grand Canyon.  But, I went to Arizona almost every summer of my childhood and saw nothing!  We would always just drive from Riverside, California to Mesa, Arizona.  Flat desert the whole way.  But, that’s southern Arizona.  Most of the amazing stuff is up north….where we are.  🙂

I didn’t set out on this journey with any idea of a ‘bucket list.’  It wasn’t until I overheard someone saying they’d achieved a bucket list goal that I thought about it and realized I am reaching some of those goals myself.  One being the beignets at Cafe du Monde and today I’ve achieved two more.  I’d always wanted to see Petrified Forest, partly because I love rocks and geology and partly because my brother had been there years ago and it has intrigued me ever since.  I remember as a kid seeing a home movie of him there.  The filming starts at the base of a petrified log lying on the ground and travels all the way to the end of it with my tall, skinny brother extending the length of it as he lay at the end of the log….then he stands up and walks away.  I thought the film was funny – very Beatles-esque.  What can I say, I love my brother.  Anyway, it was beautiful.

We were there on a great day, fortunately.  Lots of big puffy clouds in the sky keeping things cool.  Actually, later on it poured!

There is a historic hotel within the park called the Painted Desert Inn.  It has been decommissioned as a hotel and is now being used as a tourist center.  It was built by the Civilian Conservation Corp in the late 1930’s.  Really cool old building.  Especially the inside. 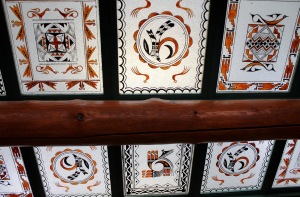 This is the hand painted glass ceiling.

There was so much great work done by the Civilian Conservation Corp.  Why is it not still active?  I really don’t get it.  Anyway….

A beautiful petroglyph.  I was glad we saw this because the ones in the park are only viewed at a distance.  It was nice to see this one up close.

It was a little disappointing that they were so far away.  Barely photographable at all.  At the same time, I am glad they keep them at a safe distance in order to preserve them.

I did my best to keep from drooling all over the Navajo weavings.  I’m pretty sure I succeeded. 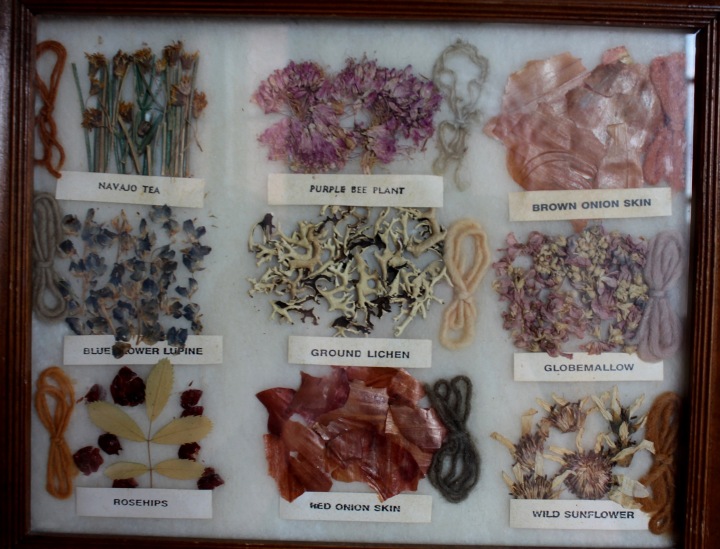 Some of the materials used for dying the wool.

A view from the inn.  Sort of indicative as to where they got the name, no?

It’s about a 28 mile drive through the park.  Some areas are stunningly beautiful, some look like …..I don’t know….. Mars?

I was surprised to see this old Studebaker alongside the road.  The National Park website (which speaks more to the roadway than to the car) says of this exhibit: “The roadbed and telephone poles mark the path of the famous “Main Street of America” (Route 66) as it passed through Petrified Forest National Park. From Chicago to Los Angeles, this heavily traveled highway was not only a road. It stood as a symbol of opportunity, adventure, and discovery. Petrified Forest National Park is the only National Park that contains a section of the old highway.”  I learned later on that Albert Einstein posed by this car (with the tires still on it!).  I found a picture of it online, but couldn’t figure out how to copy it to this site.  But it’s easily found online.  Just do a search for Einstein at Petrified Forest.

This was one of the Mars-like areas.

I’m going to post a whooooole lot of pictures of rocks.  Because I love ’em. 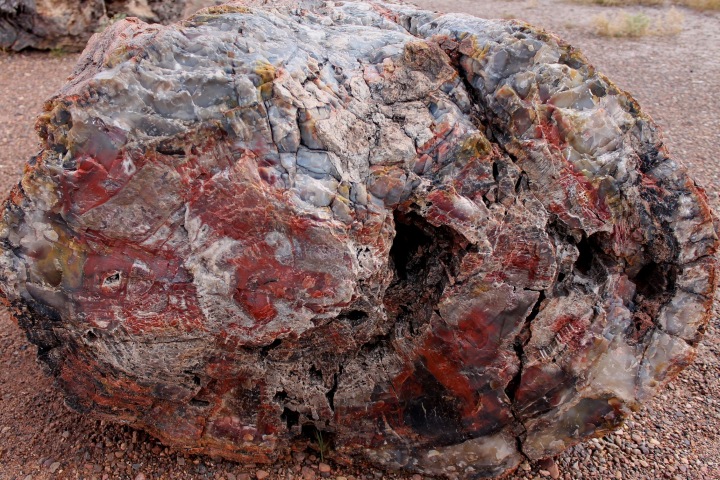 How does wood become petrified…… 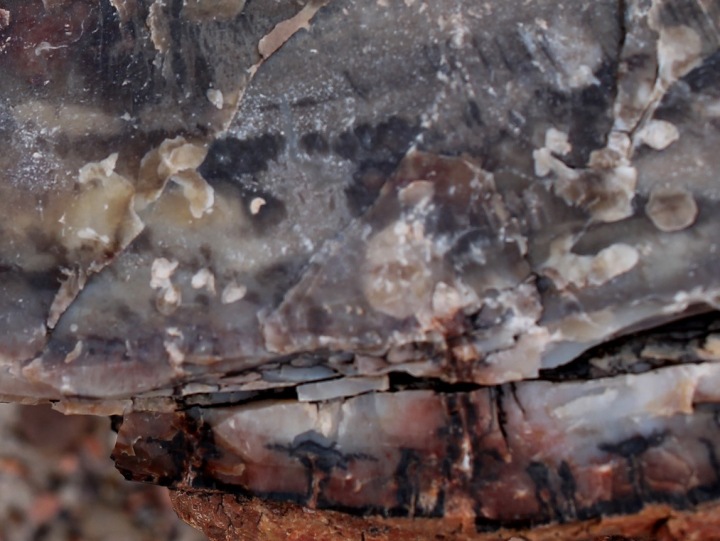 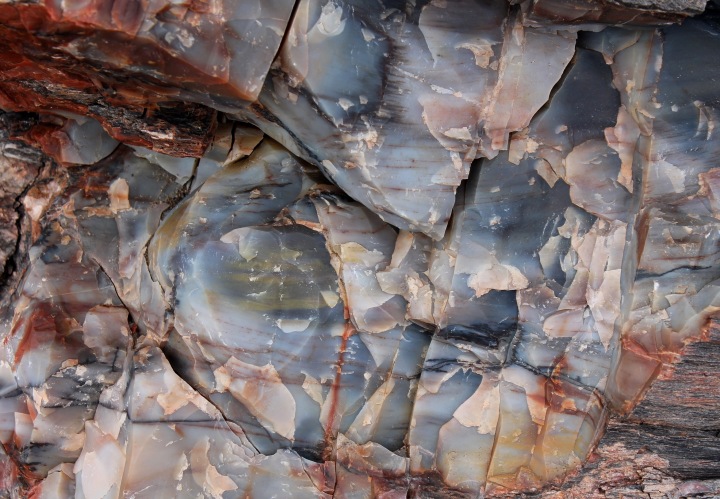 ….”Petrified wood is a fossil. It forms when plant material is buried by sediment and protected from decay by oxygen and organisms. Then, groundwater rich in dissolved solids flows through the sediment replacing the original plant material with silica, calcite, pyrite or another inorganic material such as opal. The result is a fossil of the original woody material that often exhibits preserved details of the bark, wood and cellular structures.” 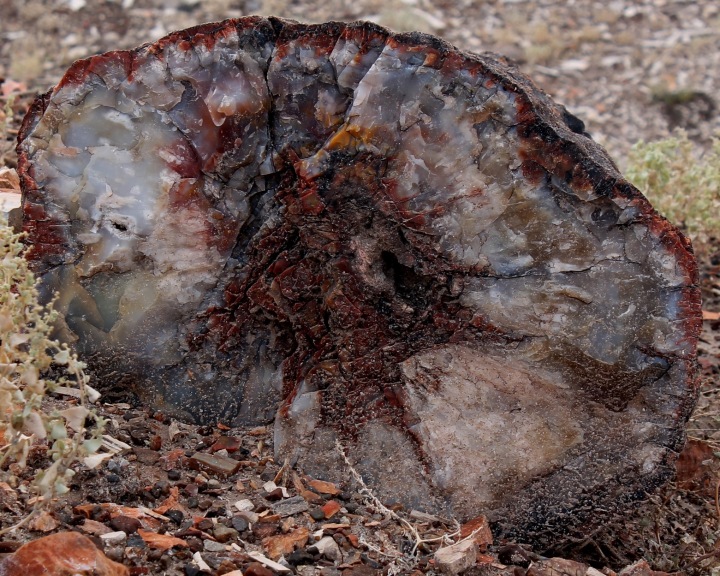 ….”The most famous locality for observing petrified wood is Petrified Forest National Park near the community of Holbrook in northeastern Arizona. About 225 million years ago this area was a lowland with a tropical climate and covered by a dense forest. Rivers flooded by tropical rain storms washed mud and other sediments into the lowlands. Enormous coniferous trees up to 9 feet in diameter and 200 feet tall lived and died in these lowlands. Fallen trees and broken branches were often buried by the river sediments. Nearby volcanoes erupted numerous times. These eruptions blanketed the area in volcanic ash with a high silica content…… 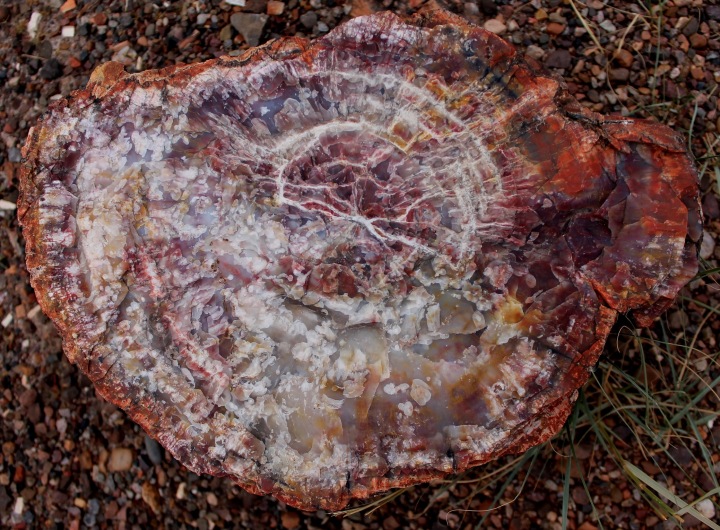 ……..Rapid burial allowed the plant debris to escape destruction by oxygen and insects. The soluble ash was dissolved by groundwater flowing through the sediments. The dissolved ash served as a source of silica that replaced the plant debris, creating petrified wood. Trace amounts of iron, manganese and other minerals were included in the silica and gave the petrified wood a variety of colors.”

In the words of the inimitable Bugs Bunny…..

I mentioned to a passerby that I felt like I was walking through a giant’s jewelry store.

Okay, okay, I’ll stop.  I suppose it’s needless to say, but I’ll say it anyway, if you’re ever in the area, you must stop at Petrified Forest National Park in northern Arizona.

I have wanted to see this for years.  It’s basically a big hole in the ground, I’m not going to lie.  But the manner in which it was created is astonishing.  50,000 years ago, a huge iron-nickel meteorite, possibly up to 150 feet across and weighing several hundred thousand tons struck Earth at an estimated 28,000 mph and at about a 70° angle with an explosive force of 20 million tons of TNT vaporizing a large percentage of the meteorite upon impact.  This impact created immensely powerful shock waves for several miles.

It had been thought for a long time that the site was the remnants of an extinct volcano, but the presence in the crater of the minerals coesite and stishovite, rare forms of silica found only where quartz-bearing rocks have been severely shocked by an instantaneous overpressure, proved otherwise. It cannot be created by volcanic action.  The only known mechanisms of creating it is naturally through an impact event or artificially through a nuclear explosion.  (By the way, I got all this information from Geology.com, the Meteor Crater website and good old Wikipedia – fascinating stuff).

…..and it absolutely took my breath away.  I could not get the entire crater in my camera view.

I hate pictures of myself and no less this one, but here I am touching the oldest known object on the planet – at least, that’s what they said.  This is a piece (the largest known) of the meteorite that is believed to have broken from the core of an asteroid during an ancient collision in the main asteroid belt some half-billion years ago.   This is one old rock. 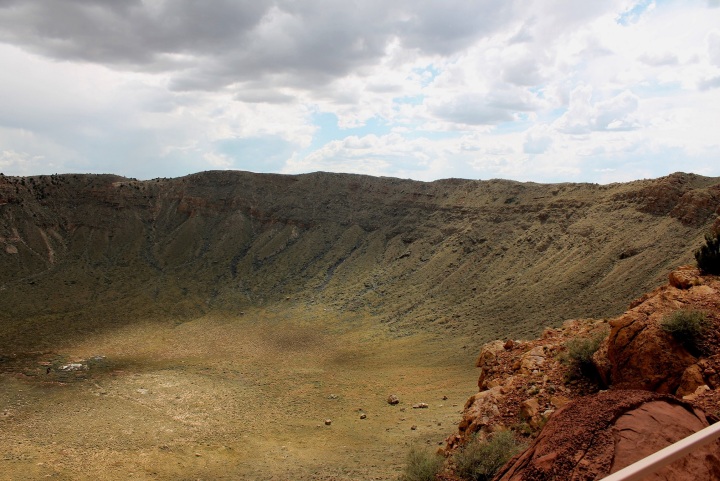 Really, a dream come true.
What a day!