….aka Enchanted Fairyland.  No kidding, this place is mind blowing.
But first, to catch you up, we left Austin late in the afternoon and headed west/northwest and spent the night in an exceptionally noisy truckstop in Absolutely Nowhere, Texas and saw this lovely sunset along the way.

The next morning, we discovered that Texas doesn’t have green tree tubes, it has rock tubes.

Finally arriving in New Mexico at which border the Texans, apparently, have got nothing better to do than shoot holes in the State welcome sign (sorry, is my attitude showing again?).

Finally arriving at Carlsbad Caverns National Park.  There is no camping there (above or below ground!) so we decided to stay in a Wal Mart parking lot in the town of Carlsbad about 20 miles from the park.  But we’d got there early enough to actually drive out to the park and check it out for a while before they closed for the day.  So glad we did.

One thing Éva and I talked about before descending into the caves was that neither one of us are comfortable with a lot of weight over our heads.  I’m not a terribly claustrophobic person, but I could never be a spelunker due to the vast tonnage lying above me……just waiting to collapse upon me.  I don’t know – it just makes me very uncomfortable.

But, there we were, being told by one of the Rangers that our self guided tour of “The Big Room” would start with a minute long ride down a 9 mile an hour elevator shaft to 750 feet below ground.  We looked at each other nervously, told ourselves to be brave, put on our big girl pants and venture forth and so we did.

I think I’m putting up more photos in this post than I have in any other post I’ve ever done.  It was hard to choose which pictures to enter.  It’s also hard to know where to start, but throughout the caverns are informational signs (several of which I’ll include here) and I’ll start with this one to give you the overall geologic history of the caves. 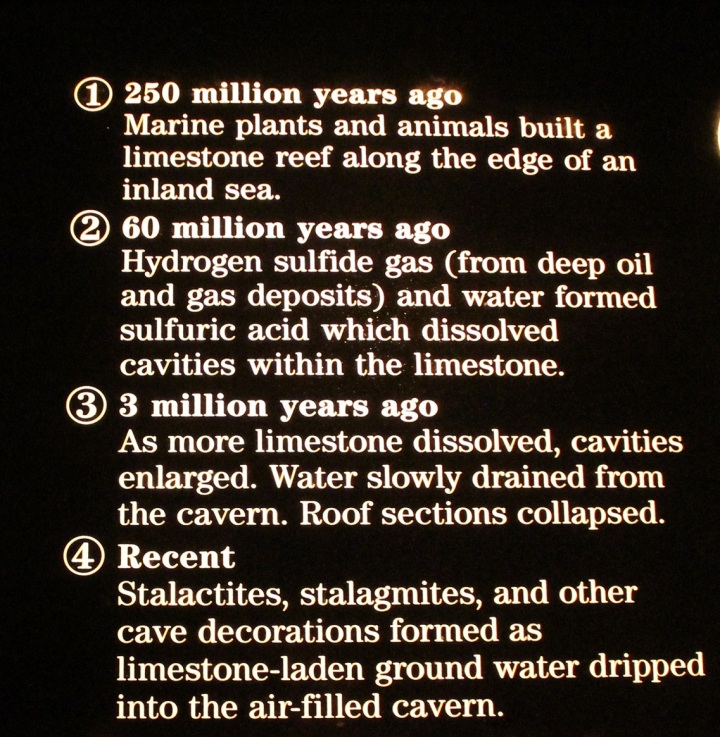 And here they are.

I thought the shadow in the center looked like a dinosaur! 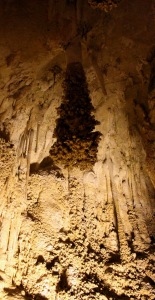 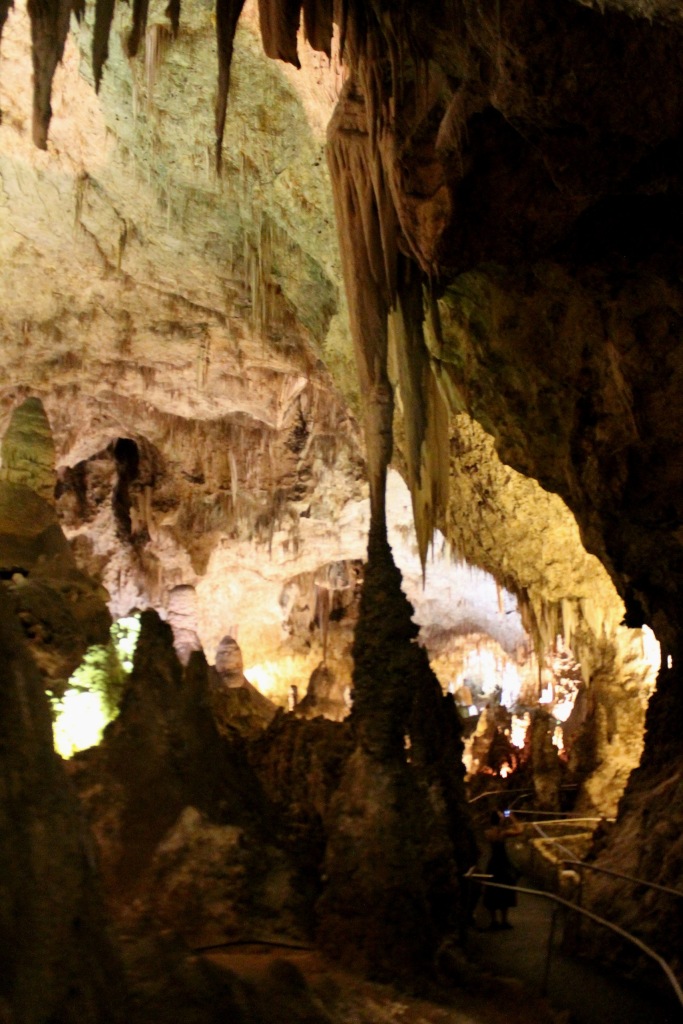 See Éva down at the bottom right in the two pictures above?  Gives you a sense of the scale of the caves which is sort of hard to capture in pictures (for me, anyway).  Another thing I should mention is that it was much darker in the caves than it appears in these pictures which is why some of the pictures are more out of focus than others (that’s my excuse and I’m sticking to it).  I had my camera set to the most light-gathering setting (how’s that for technical camera speak?).

I don’t know why they called this particular area Fairyland.  The whole place looked like Fairyland to me. 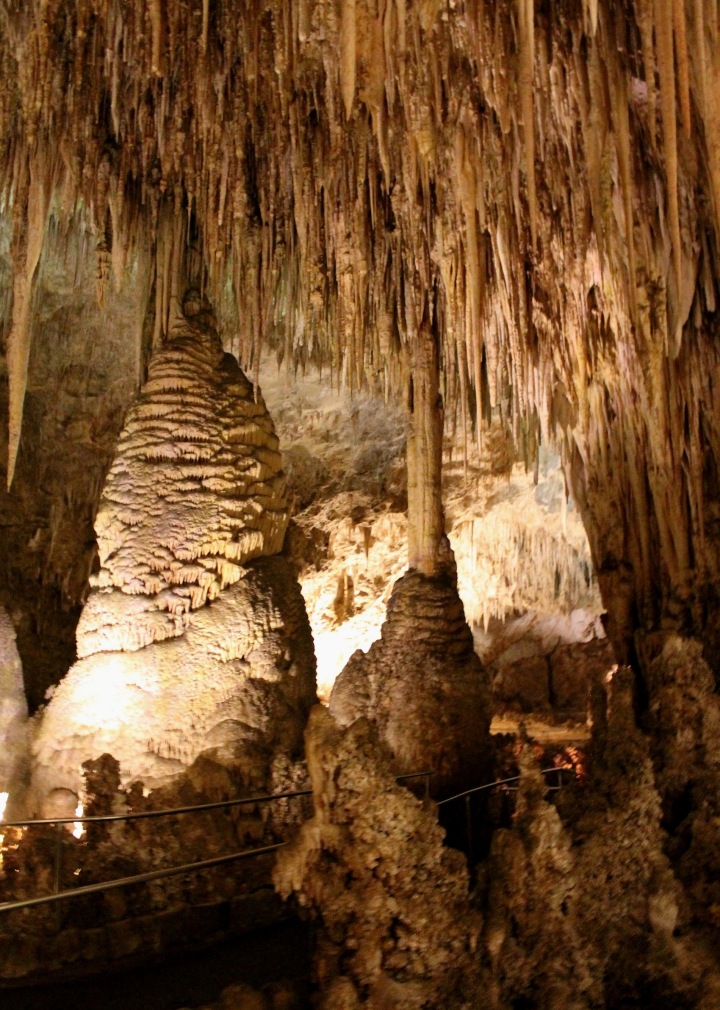 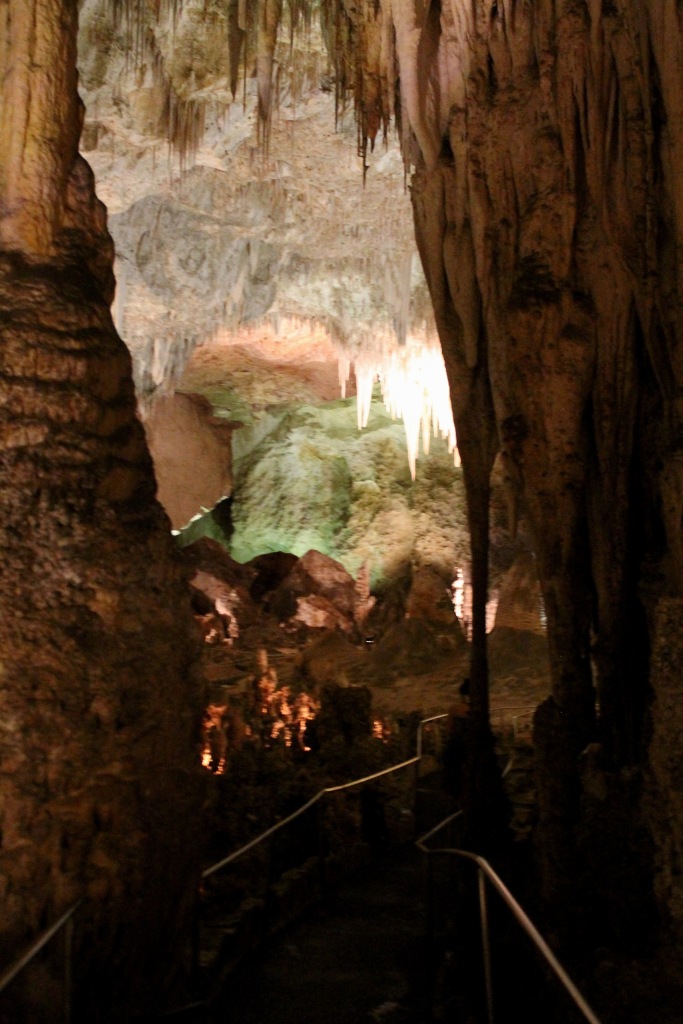 I loved these formations around the pools of water.

I didn’t find much info about them at the park so I looked it up after we left and here’s what I found:

Cave lily pads are created when water droplets containing calcium carbonate (calcite) fall from the ceiling of caves into standing pools of water and create a formation on the floor that resembles a lily pad. These formations occur when a light plate composed of calcium carbonate is held in suspension on the water’s surface. When the plates become too heavy, they sink. Other plates successively form one upon the other and through time form a lily pad. 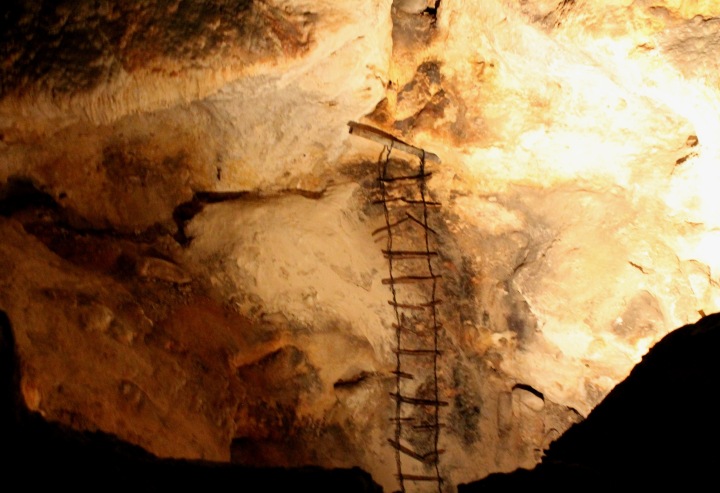 A few bits of information for you…. 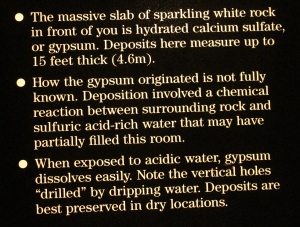 This refers to the picture below. 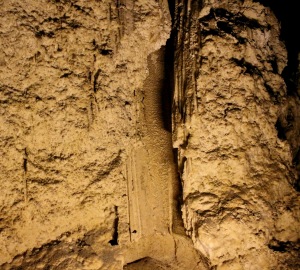 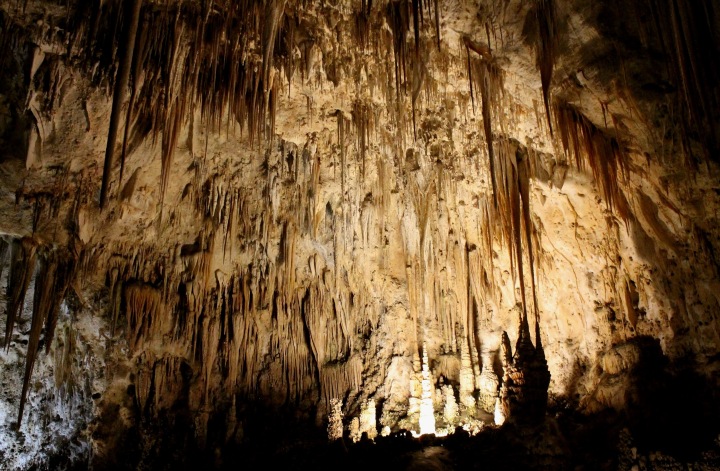 You can get a sense of the size of this stalagmite from the railings around it.

This is the base of Crystal Spring stalagmite.  You can certainly see why they call it Crystal. 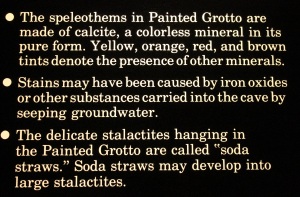 That was the first day.  Really.  It took us about an hour and a half to walk through the Big Room and take these pictures.  It’s funny, after we were down there for a fairly brief time, we forgot that we were so far underground.  The fear or trepidation for both of us just sort of filtered away.  There was just so much beauty around.

At around 7:00pm, there is a “show” at the natural entrance to the cave.  The bats make their evening exit to gather food.  Going out to dinner, I suppose, is another way of putting it.  Anyway, they do not allow you to take pictures of this.  The clicking sound of cameras and the electronic interference of cell phone cameras disrupts the bats’ natural echolocation abilities.  I have to say, if you ever go to Carlsbad Caverns (and I highly recommend that you do), you must stay and see the bats flying.  The Rangers advised everyone to be still and silent and it was so cool to not only admire the bats’ flight, but to see all these humans watching them and being silent out of respect for them.  Very cool. 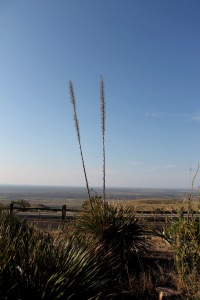 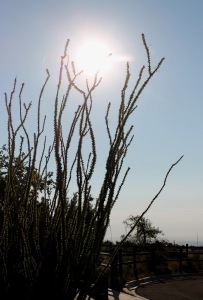 The next morning we went back because we wanted to do the King’s Palace tour.  I’m not big on tours, but this sounded good.  We got there early enough to do one more self-guided tour – the Natural Entrance tour (where the bats flew out the evening before).   Below is the natural entrance. 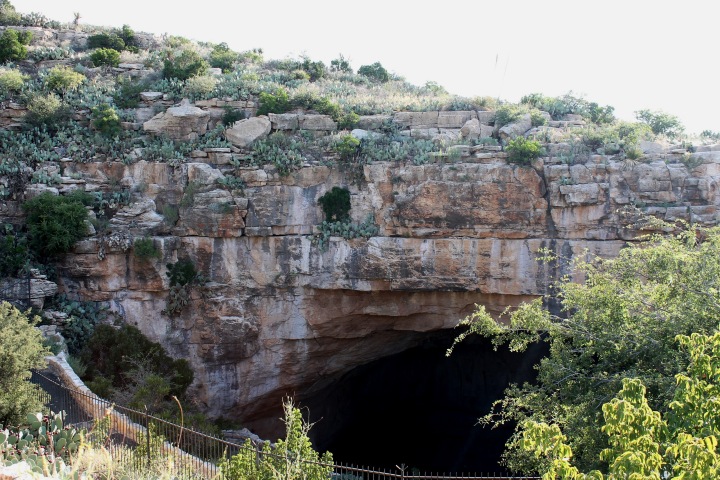 This is taken from the amphitheatre seating area.  While we were watching the bats emerging the night before, we noticed a couple of ringtails climbing into there home – a hole in the rock wall.  Really cute! 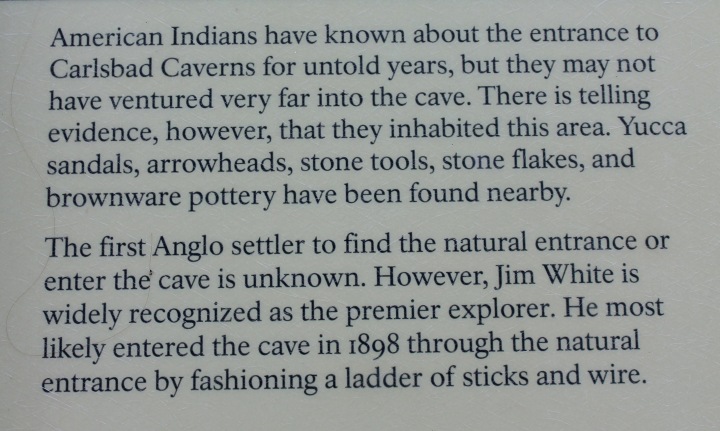 This is a view of the path down into the cave.  When you descend via the elevator, you can sort of suspend belief that you’re so far underground.  But, in talking it over afterward, Éva and I discovered that we both felt that as we were descending by foot, we were fully aware of the depths we were reaching.  I kept thinking to myself, “You’re actually intentionally walking down, down, down into this cave……. are you crazy?”  Just a very different feeling.  Also, this part of the cave had much tighter spaces to walk (and duck) through. 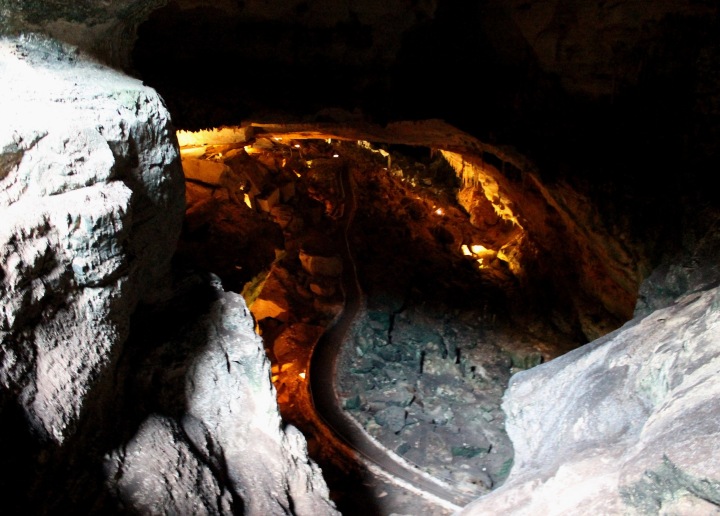 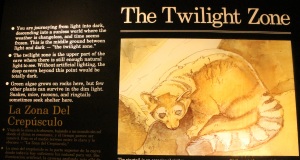 Here’s a drawing of one of those cute ringtails. 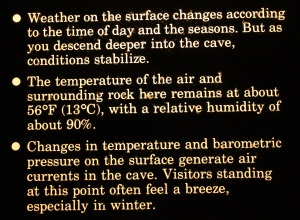 It got chilly, indeed. 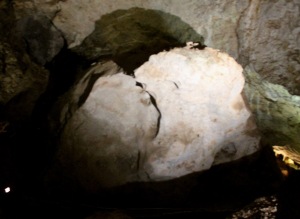 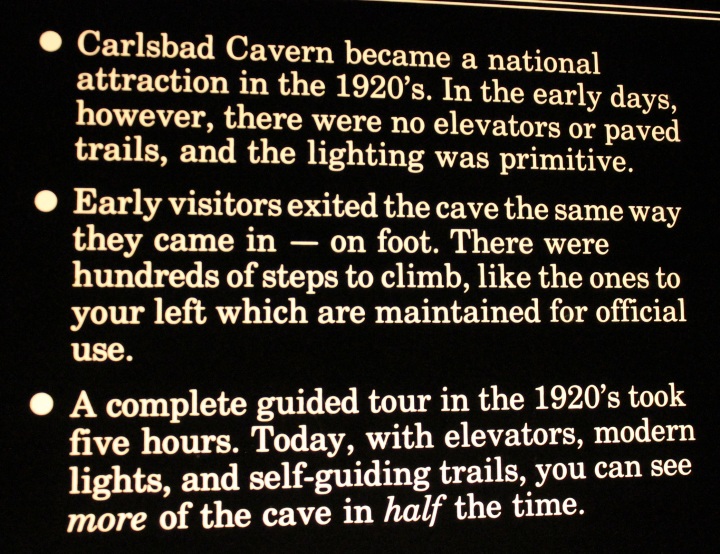 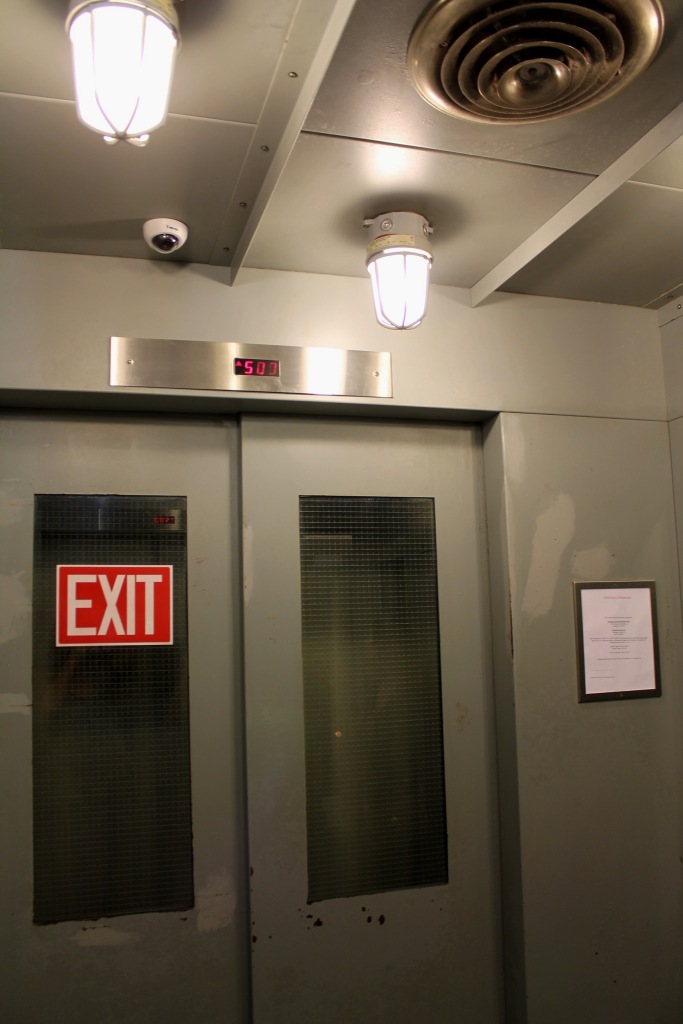 When you look through the windows in this picture, it is a blur.  But you could actually see the rock wall mere inches away from the elevator car!

The time rolled around for us to take the King’s Palace tour.  This picture is indicative as to why I don’t generally like taking tours – the rush.  You’re scooting along with a lot of other people and I like to take my time to take pictures, dang it! 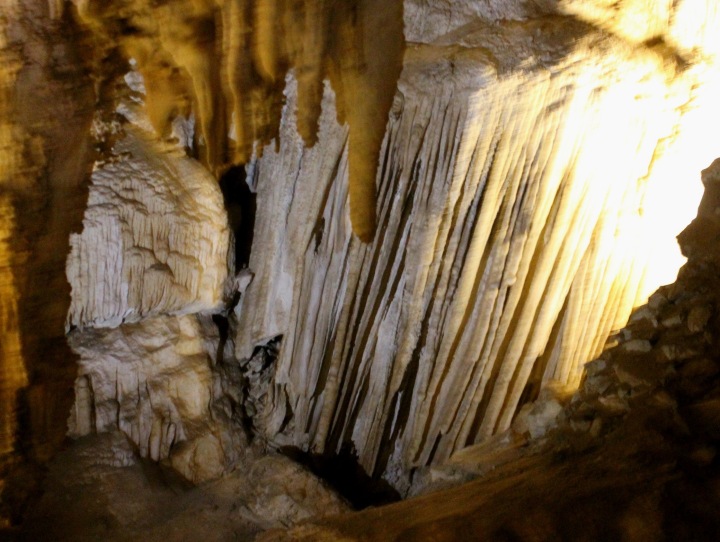 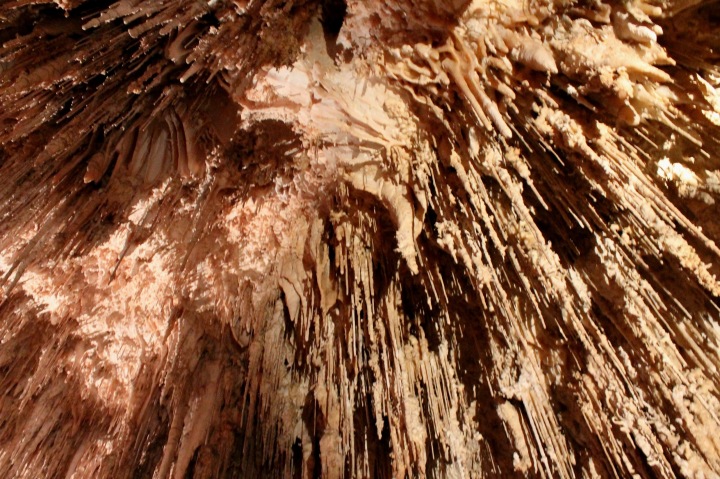 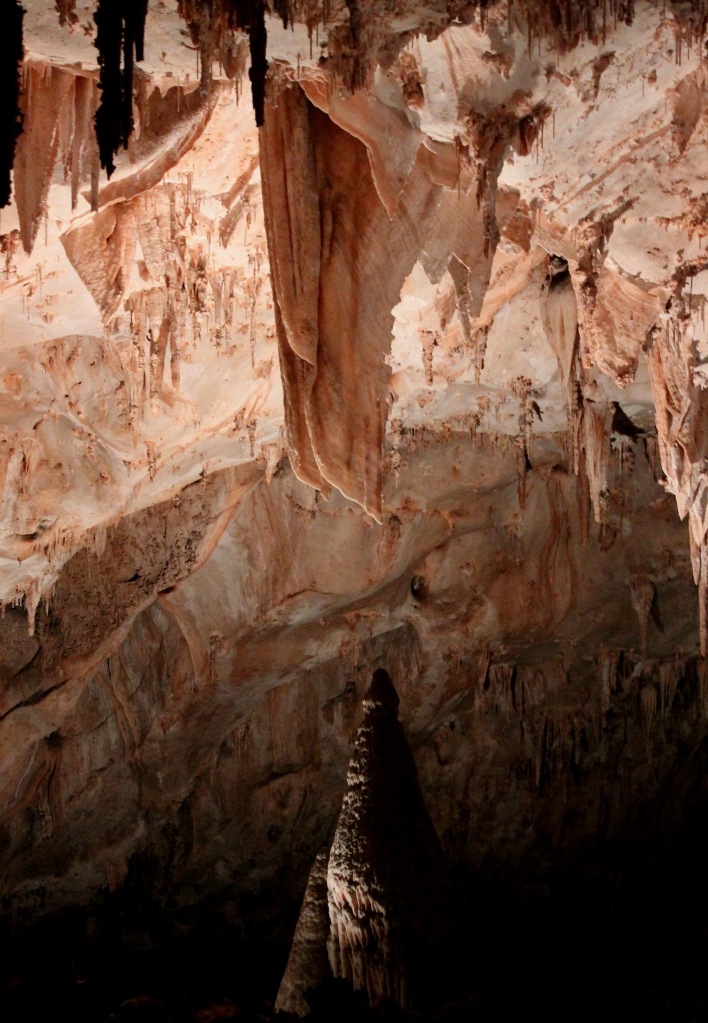 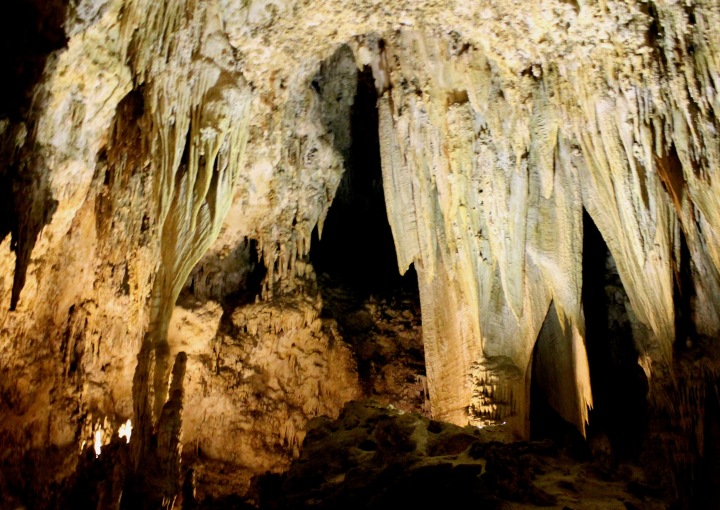 I just sort of liked the odd coloration of the photo above. 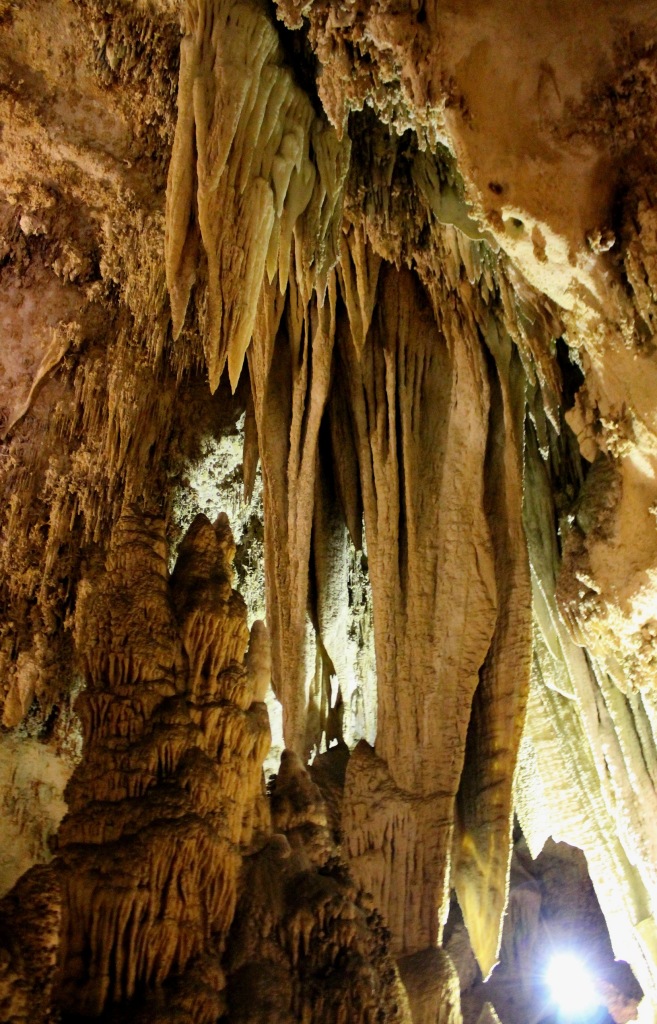 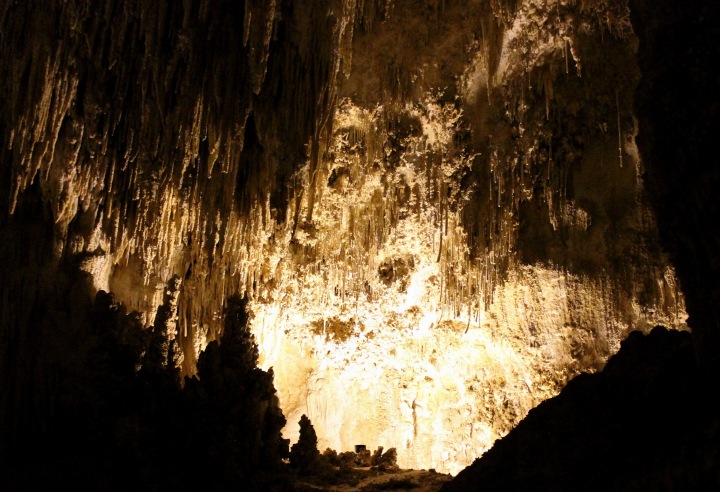 At one point, our Ranger had us all sit on some benches and she turned off all the lights so we could try to imagine what it must have been like for the early explorers of the caves.  Pitch black doesn’t describe it.  Just black, black, black, black, black.  Then she lit a small lighter and said that’s about how much light their lanterns produced.  Still, so dark.  It really took some courage to explore those caves. 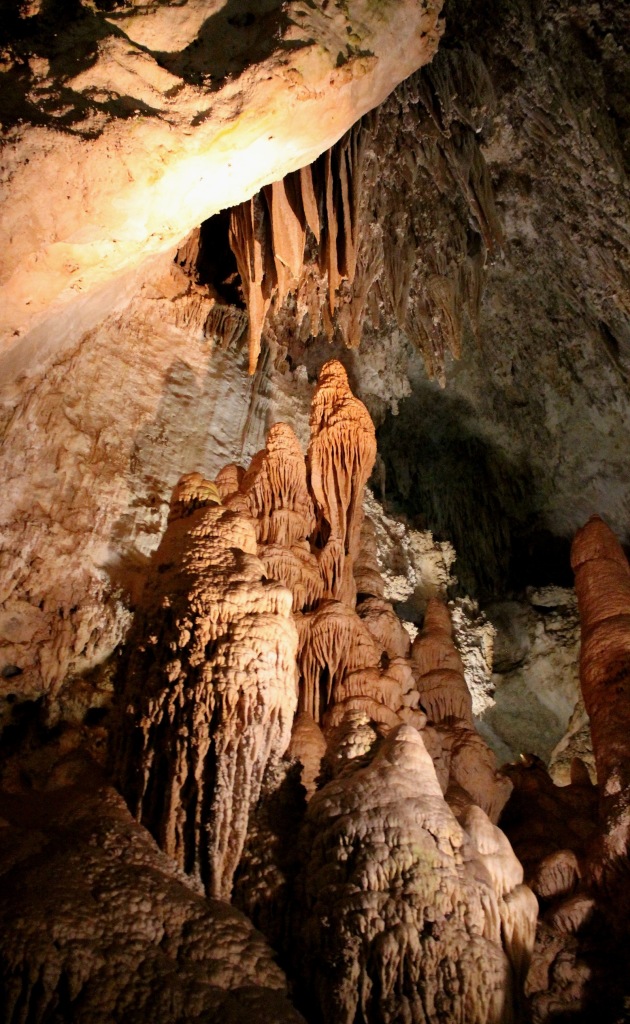 Well, I hope these pictures at least give you some small sense of the beauty of Carlsbad Caverns.  I’ve wanted to see them for years and I’m so glad I finally made it.  Just stunning. 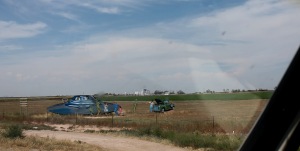 Roswell, New Mexico – land of the alien obsessed….or something like that….???