I’ve had a slow, introductory glimpse at Asheville.  I’ve seen some great sights, been introduced to wonderful people, seen parts of the town I imagine a lot of people don’t ordinarily see….and I still feel it’s been only a rudimentary introduction.  I think I’ve barely scratched the surface of this place.

But, here are my first impressions: 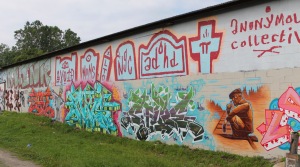 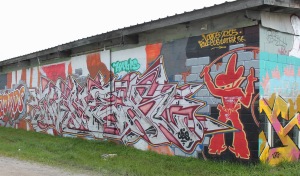 The graffiti.  There’s a section of town with old factory buildings that became a haven for graffiti artists.  Some of this art is phenomenal, in my opinion.  Apparently, the owner of these old buildings has been accepting of the art, but I’ve heard that the city is trying to shut it down, which I think is too bad.  But I have to admit, I’m not really clear on the whole story.

These are pictures of the outside of the Moog factory.  Really cool depictions of various synthesizers on the windows.

Here is perhaps the most renowned Moog synthesizer of them all: Keith Emerson’s (a faithful recreation of which, they are currently selling).  It was a big deal for me to be able to go to the Moog factory – I’ve been a huge fan of much of the music that’s come from this incredible invention for years.  Rather, decades.  Anyone can have a tour – they give two tours a day.  But, I got a little extra special tour because I’m so incredibly special…..no, actually it’s because two of my kids work here.  Well, my daughter, Annie, and her husband, Nick, but I think of Nick as one of my own.

Here’s a picture of the genius himself – Bob Moog…..

….and our tour guide, a young man named Paul who’s giving a sampling of the incredible sounds possible from this amazing system.

Part of the factory. 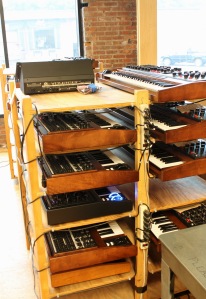 Here they’re running some of the synths to test them before shipping them out.

Here’s Nick working on a module. 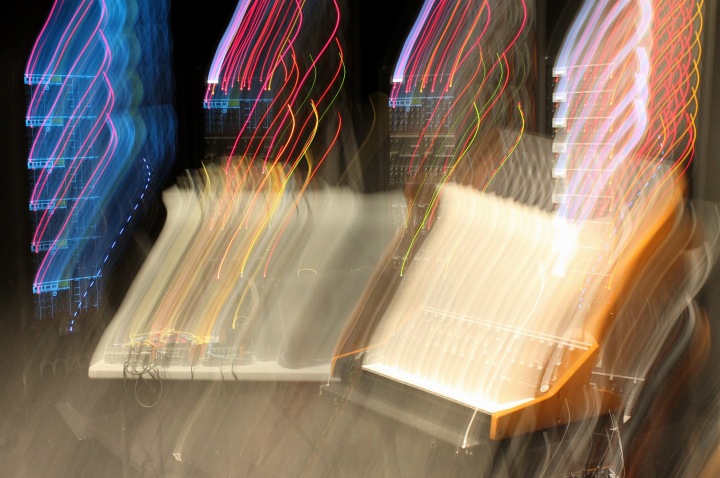 And here’s what happens to your mind when you’re listening to Emerson, Lake and Palmer or Yes, Pink Floyd, ELO, NIN, MGMT, The Beach Boys, The Doors, Herbie Hancock, Depeche Mode, Kraftwerk, Chick Corea, Frank Zappa, Bernie Worrell, Parliament Funkadelic, the list goes on and on and on and on in a huge array of musicians, all of whom have used Moog synthesizers in their musical creations, including The Volt Per Octaves, which happens to be Nick, Annie and Éva’s band.  They’ve just released their latest album (on vinyl, no less – a real album!) and it is fantastic.  I love it.  And not just because I’m the mom!  I do love electronic/analog music.  Truly, truly.   And their new album “Joining the Circuits” is absolutely great.  So, um, yeah….. I’m a fan.

And speaking of bands that use Moog synths, I got to….. 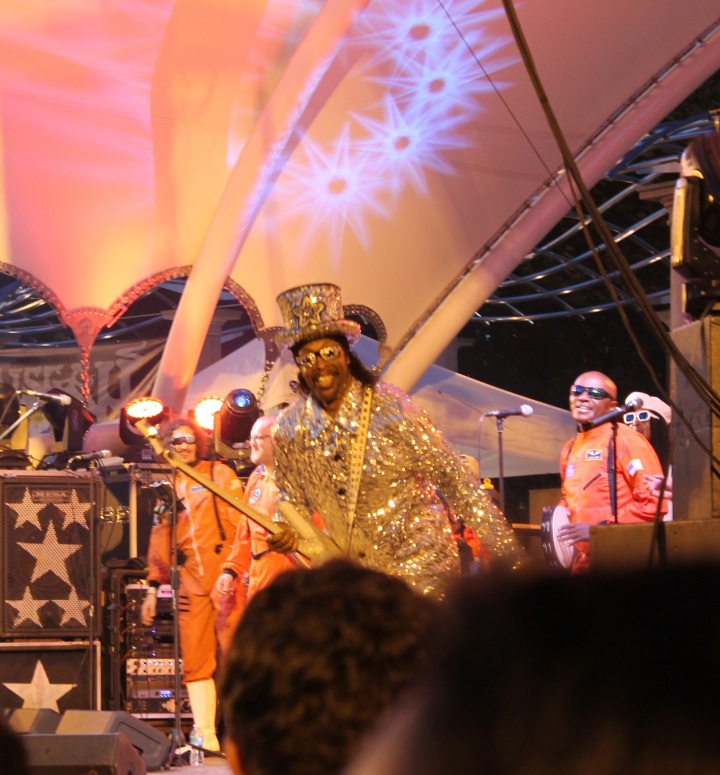 …Bootsy Collins!  Bootsy started out in the early 1970’s with James Brown’s band (the “J.B’s”) and later joined Parliament/Funkadelic, but that barely addresses the extent of his influence in the funk world.  He’s been inducted into the Rock and Roll Hall of Fame and his funk bass style has been imitated by countless musicians and he’s performed on countless recordings.

And his costumes were great! (Check out Daffy Duck in the background!).

The man knows how to put on a show!  People were having a great time.

Nick got three of Bootsy’s Moogs in good working order before the show.

Great job, Nick.  And great job, Bootsy.  It was a really fun time.

This is the Asheville City Hall building.  As we were approaching the concert arena, the sun was setting and it really lit this building beautifully, which brings us to the architecture of Asheville.  Or, at least, some of it.

There are a lot of churches in Asheville and I’m hoping to take more pictures of them.  Some are quite old and beautiful. 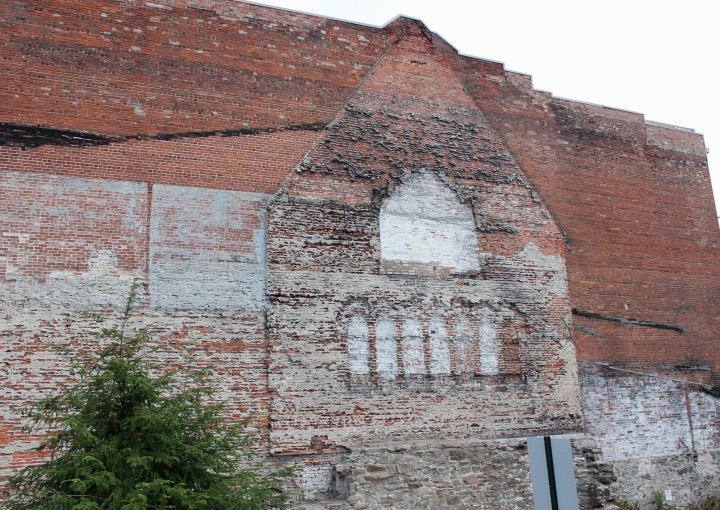 I thought this was really interesting – it appears to be a space where an old church was abutted to this brick building, but now the church is gone.  Odd! 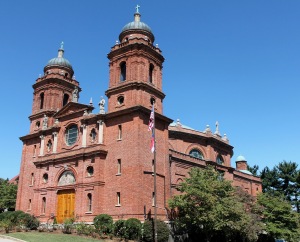 This is the Minor Basilica of St. Lawrence the Deacon and Martyr.  No, really, that’s its name.

If you need to perform any Scottish Rites, here’s your place.

There’s another church I’d seen from a distance when I was in a car but when walking around town, I couldn’t find it.  It’s a Baptist church and has a beautiful dome.   Either it was not within walking distance from where I parked downtown or I didn’t walk in the right direction, which would in no way surprise me.  But I’ll try to hunt it down and post some pictures next time.

Here’s another Kress Department Store building.  They were very popular from the late 1800’s to the early 1980’s but are no longer in business.  This one houses an art market on the ground floor.  Lots of booths of locally made art.  Fun! 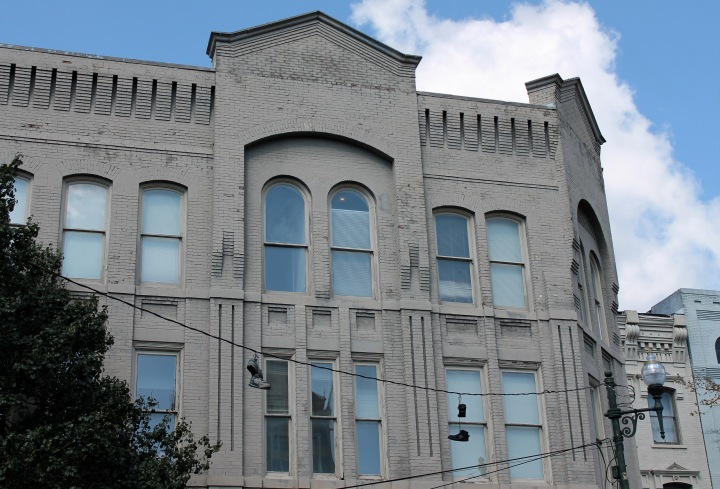 I love these old buildings….. and the old shoes hanging on the telephone lines! 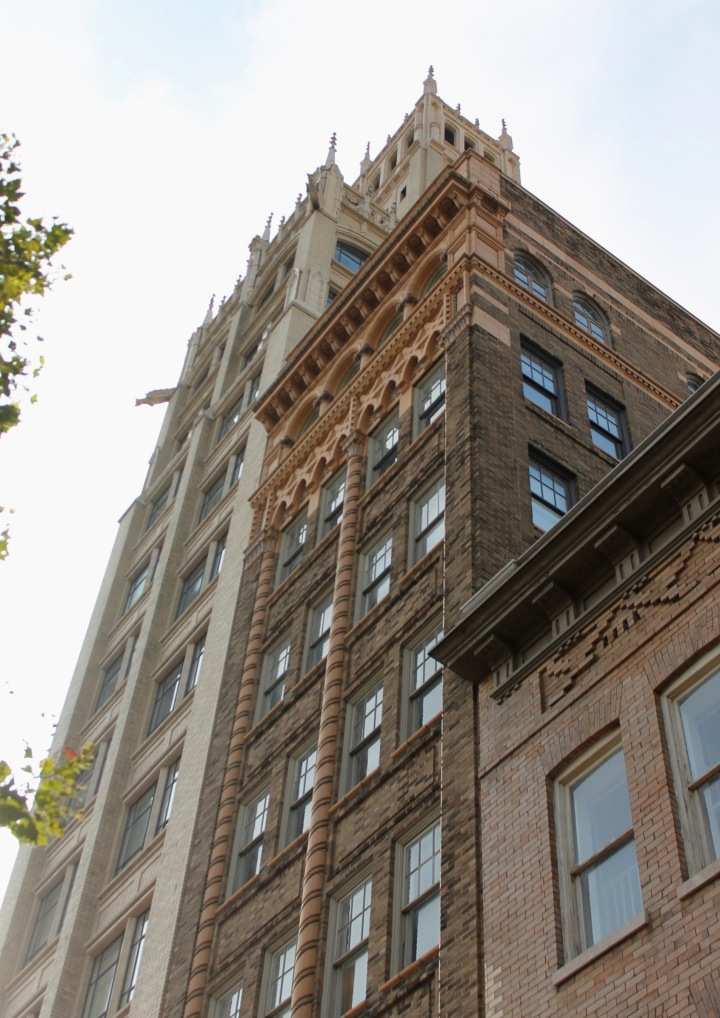 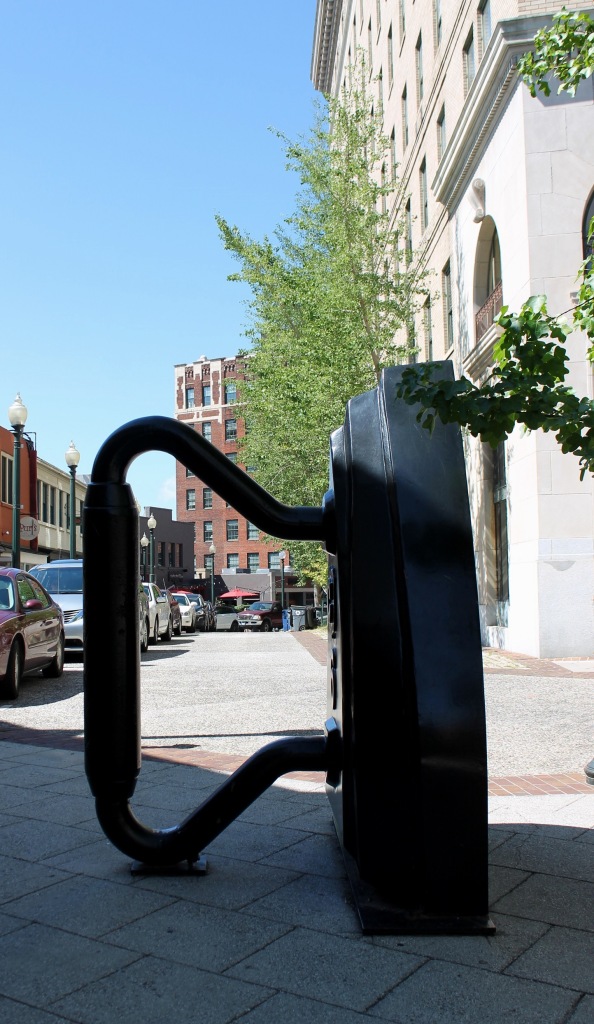 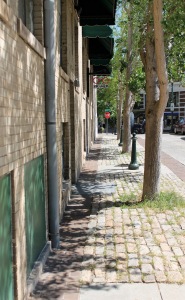 …and the pretty brick sidewalk alongside it.

This is Grove Arcade from the outside…… 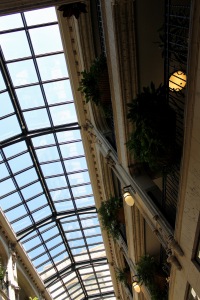 So lovely.  There are quite a number of shops in the building, but my favorite by far was Battery Park Book Exchange and Champagne Bar. 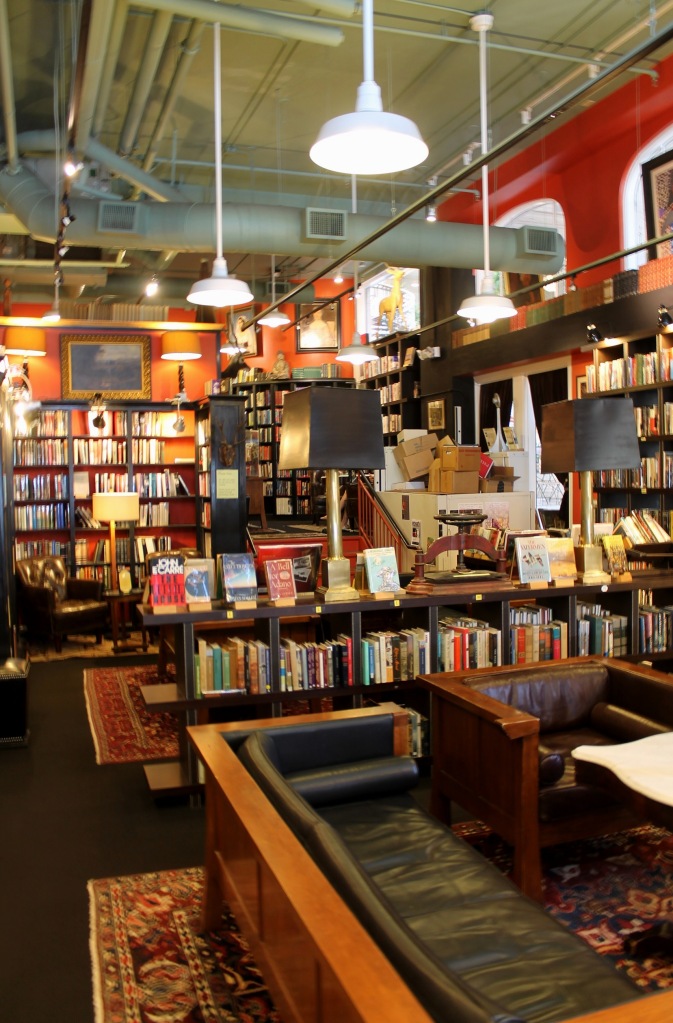 I want to move in.

There’s great art all around (we all need glasses after a while, don’t we?). 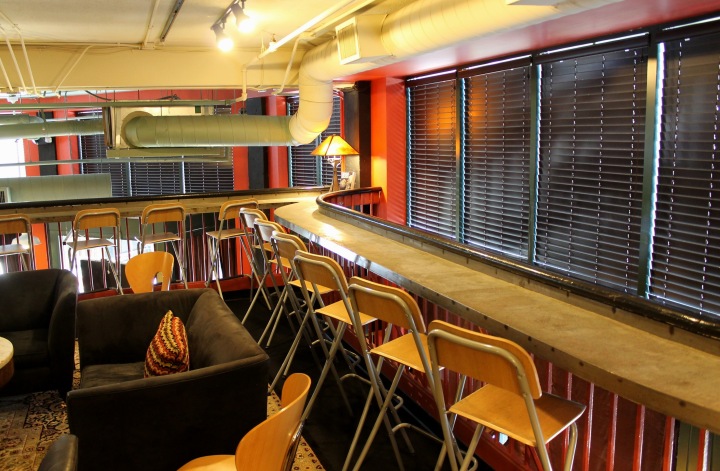 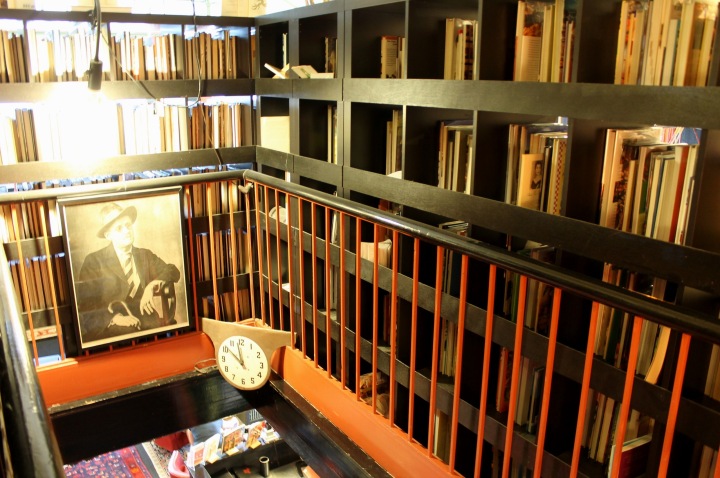 Seriously, I want to move in.

So, I’ve covered Graffiti, Moog, Bootsy, Architecture and now here are just a few random pics from around town. 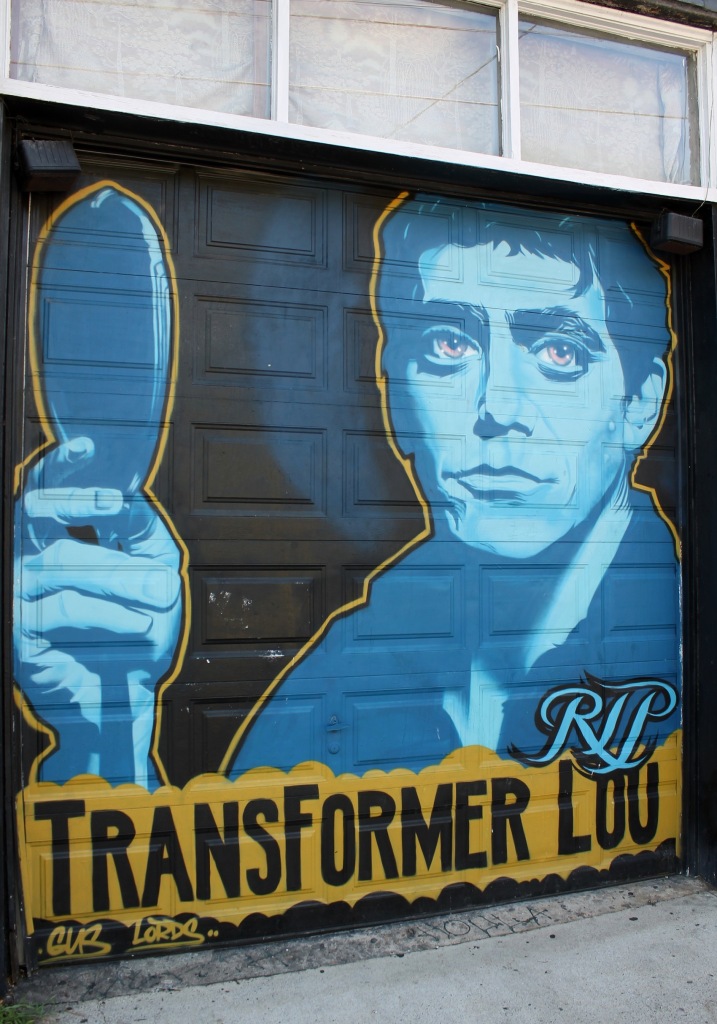 And murals that I’m sure weren’t intentionally meant to be murals, but still, pretty cool. 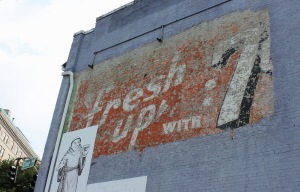 Here’s the edge of this building….

….just in case you were wondering. 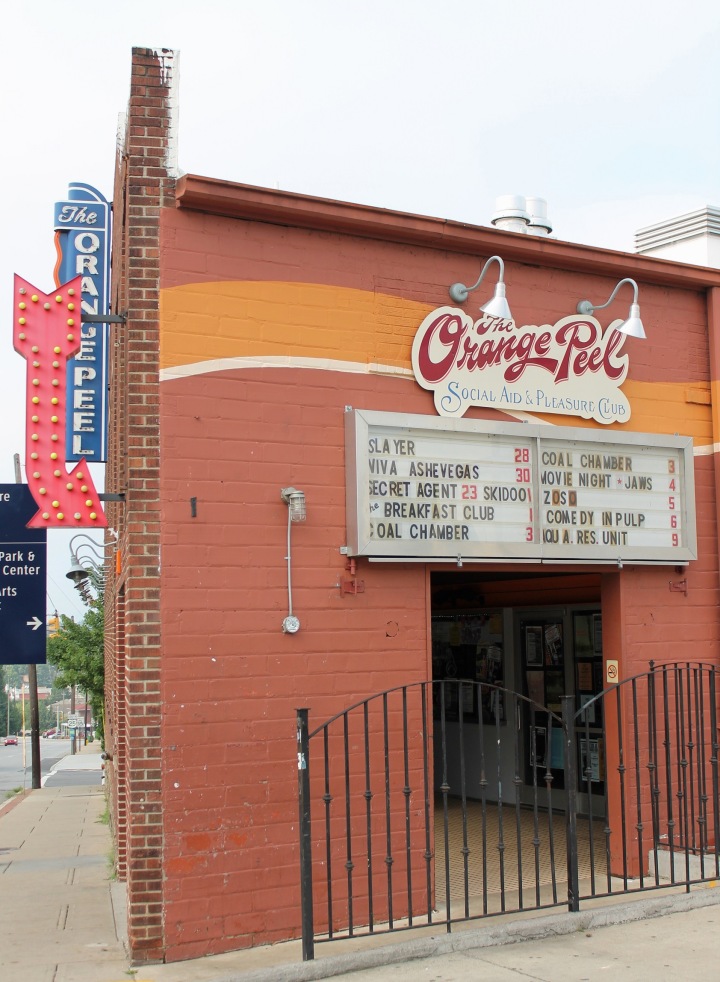 The Orange Peel is a popular local music venue which has seen bands from Bob Dylan to Modest Mouse to the Black Keys to…. The Volt Per Octaves!  Yes, indeedy! 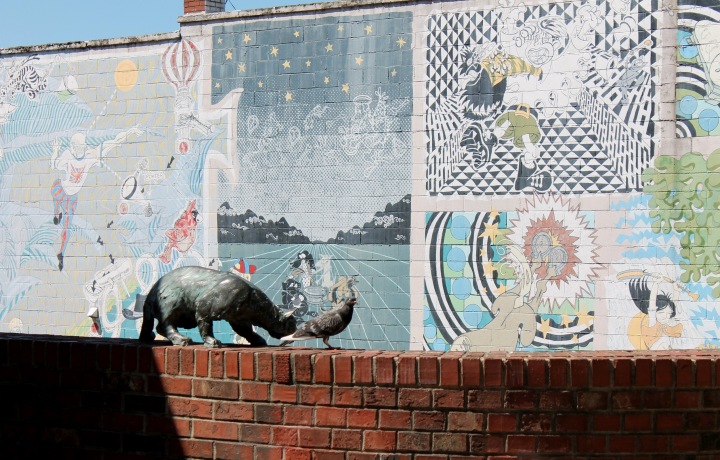 As I approached this mural I noticed this cat sneaking up on the bird and thought, “Uh oh!”  But as I got closer I realized…. 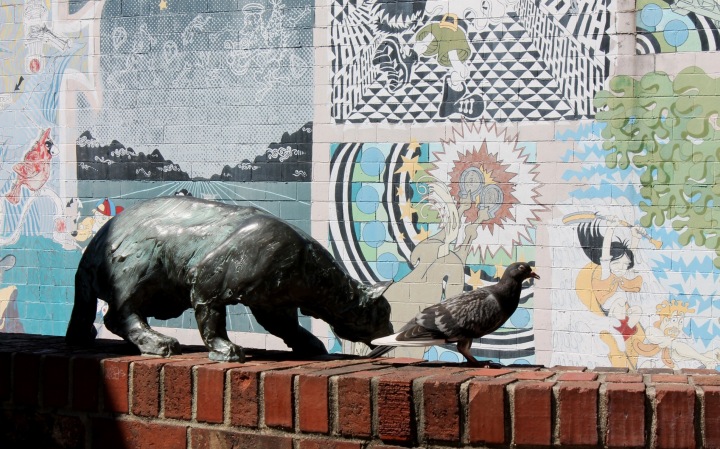 …the bird was real, the cat, not so much. 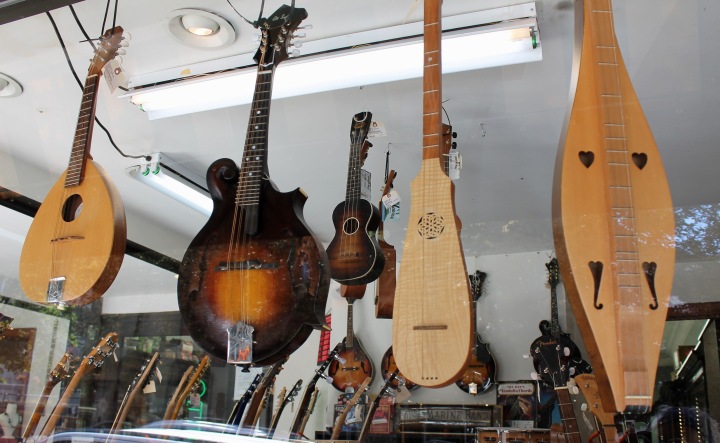 Speaking of music, here are some bronzes outside of ExploreAsheville.com Arena.  Weird name.  Anyway, there is a rich musical heritage in these here hills.  As they say, “Bluegrass to Newgrass to Nograss!” 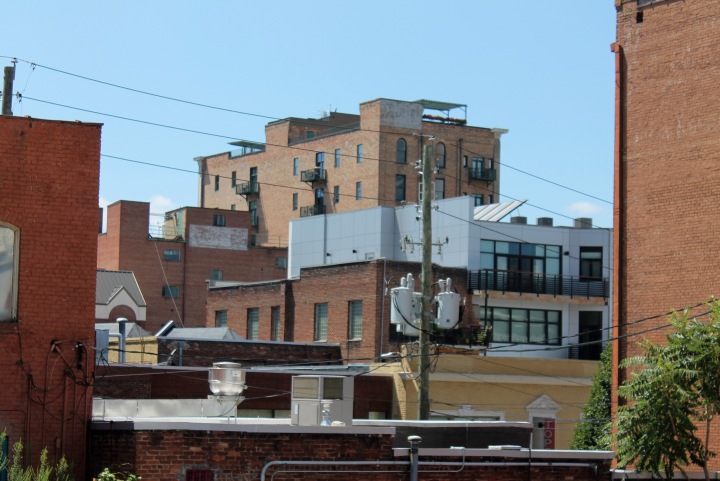 So, as I mentioned before, I think there’s so much more to explore in this city. 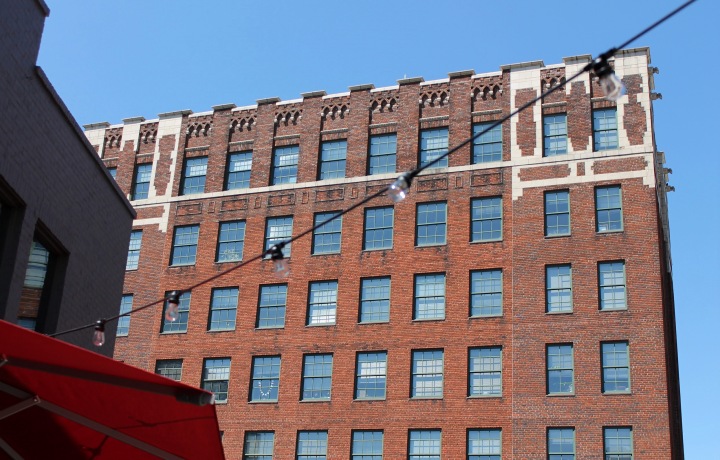 And I’m surely looking forward to it.