After a fairly rough week at work, I wanted/needed to just get out and do/see something pleasant, something calming and beautiful.  I just needed to see beauty.  I don’t know if that sounds strange, but it’s how I felt.  Being that I’d just received my Monterey Bay Aquarium membership card in the mail, thinking of where to go was easy.
It was a lovely day and lots of other people apparently decided going to the aquarium was a good idea, too…..it was very crowded, but SO worth the time.

I didn’t get all the information on the things I saw.  Honestly, I just didn’t want to work my brain……  I’ll go back again and again and find out more, but yesterday I just wanted to relax and enjoy. 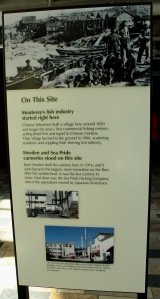 When you first walk in (through the Member’s entrance, anyway) there’s a lot of information about the old canneries which used to operate on the site.

And lots of interesting stuff about John Steinbeck and Ed Ricketts (who was depicted in Cannery Row as “Doc”).  I’d like to do a post some day about the Steinbeck and Ricketts history in this area.

There were also some artifacts from the old canneries.  It kind of reminded me of my tour of the Guinness factory in Dublin.  Now onward to what brings us all to the aquarium (and remember – click on the photos to get a better view)… 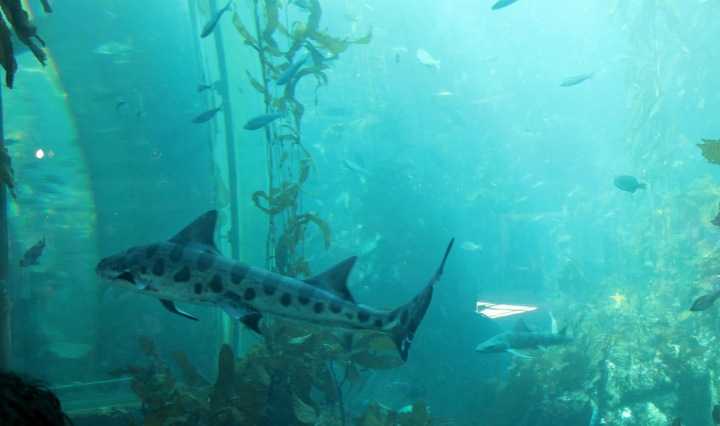 Wow….. these anemones were incredible.  And big.  This was, I would say about 2 feet long. 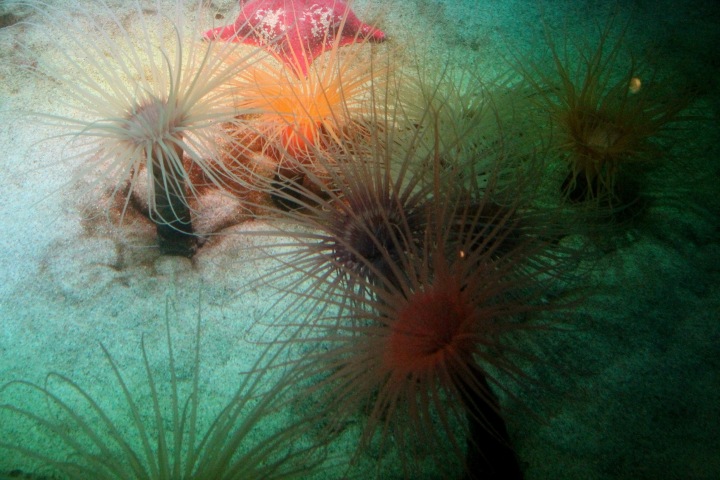 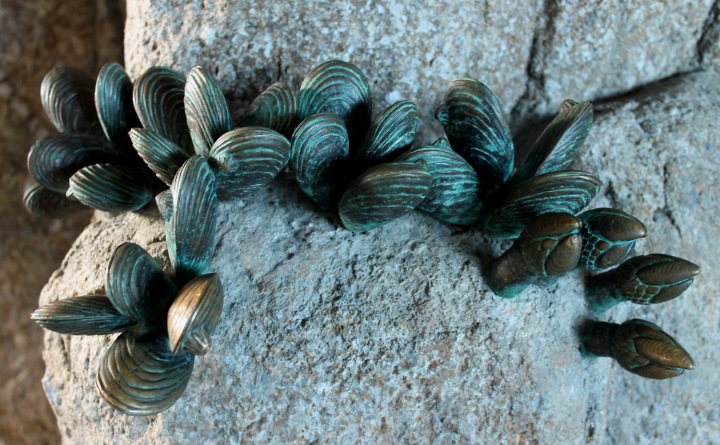 There were a number of art installations around the aquarium like the one above.  They’re bronze castings.  There was a very cool one by the octopus tank, but there were so many people there at the time and I didn’t feel like waiting to get close enough to take a picture.  That’s the nice thing about having a membership – I know I can go any time and don’t feel the pressure to see everything in one visit. 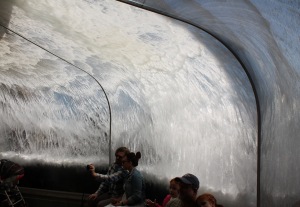 ←This was pretty cool.   A sort of tunnel of glass where ocean waves splash over.  It was sweet to see this couple filming themselves while the wave cascaded down behind them…. 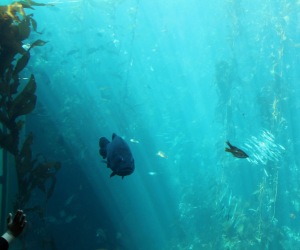 …and sweet to have captured a child’s hand pressed against the glass…. 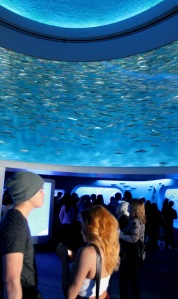 Here, the fish (maybe sardines, again, but not sure – these were somewhat bigger) were also going ’round and ’round….. but overhead.  Pretty cool.

There are decks on the different levels of the aquarium where you can go out and enjoy the view.

While out on one of the decks, I saw this shack and had a hunch it might be Ed Ricketts old house or lab or something.  I mean, why would this beautiful, modern aquarium have an old shed hanging around out back?  I asked someone about it and they said yes, it’s his old lab…. and you can take a tour….. which I will definitely do someday.

Back inside – remember that quote…?

“If there is magic on this planet, it is contained in water.” 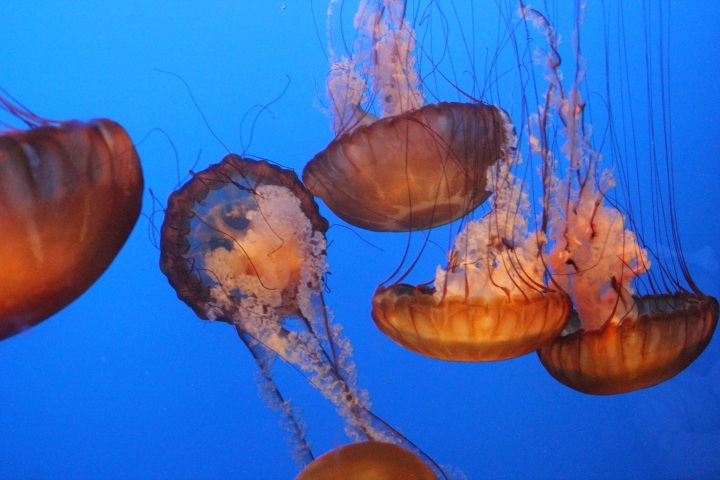 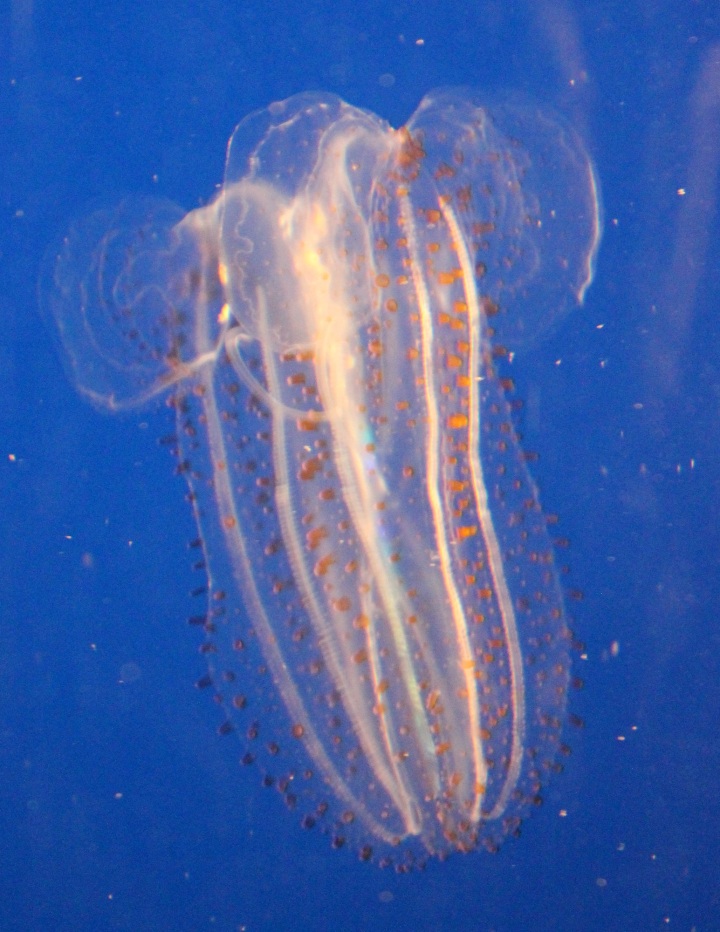 These were only about 4 inches long.

↑This little guy was hanging out by the window.  I was able to capture just a little of its iridescence.

These were such a trip.  They were so globby….is that a word?  I wanted to reach inside and untangle them!

This sad and beautiful work of art was created using bits of plastic which were found floating in the ocean.  The aquarium, with a focus on ocean health, raises awareness at every turn and educates on environmentalism. 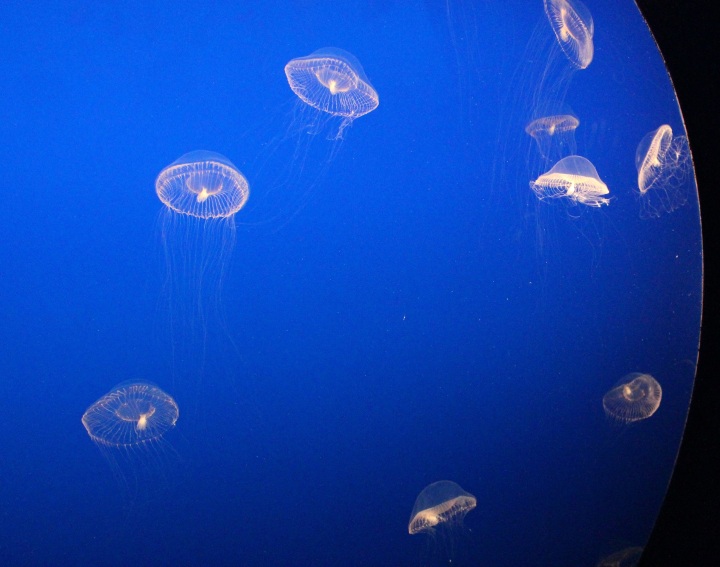