I didn’t think he was going to let me in. The customs agent at Dublin Airport. He asked how long I was staying, how much money did I have (i.e. can I support myself while I’m here), did I know anyone here, what jobs do they have, when was my departure date, why didn’t I have a ticket for my flight out and, since I do know people here, could I show him an email thread with them regarding my visit? To some extent I understood the questioning – it’s his job. But, this seemed excessive. I apprehensively told him I was just traveling around and didn’t have really very set plans. He was polite, more or less, but didn’t seem to like that answer and gave me just a little over two weeks in Ireland (Northern Ireland included, oddly enough). He actually put a date on my passport by which time I must be out of the country. He also cautioned me that it might be difficult entering other countries as well without a set schedule for travel. I was really surprised by this.
I’ve always thought traveling through the Schengen* countries would be relatively easy. Apparently not. According to him, those days are nearing their end. I’ve spoken with a few other travelers who were amazed that this happened. No one I spoke to had an experience like this. Maybe he was just having a bad day. Maybe I look like a drug dealer. I don’t know. Anyway, I’m just relaying this info as a head’s up to other travelers and wondering if anyone else out there has had such an encounter.
At any rate, thankfully, he did let me in. 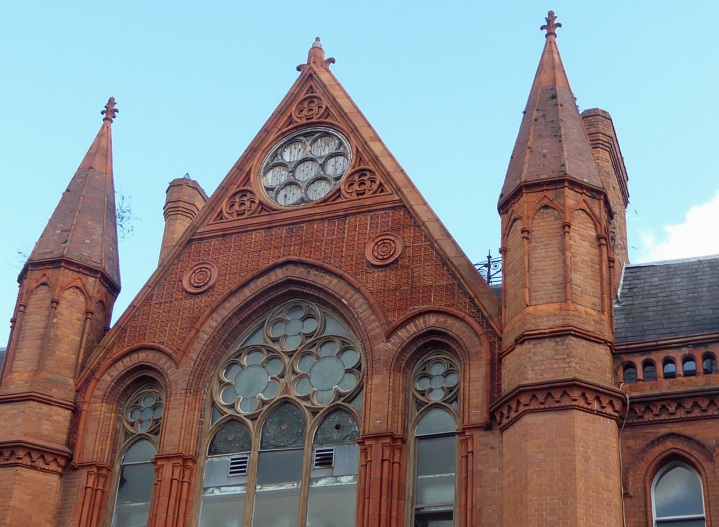 Back in my ‘3 Days in Bolivia‘ post I wrote about two marvelous men I met while on my travels there – Stephen and Maurizio. Well, they live in Dublin and I’m delighted to say I got to spend a few days with them. They offered their place for me to stay in Dublin and it is a beautiful, cozy home. 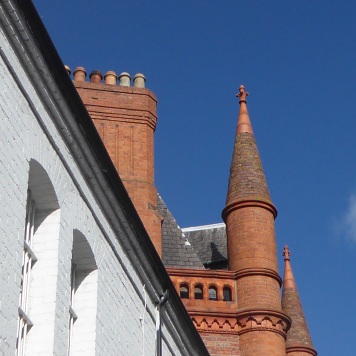 These first few pictures are of, basically, a shopping mall. I was walking around with Stephen and asked if this had once been a church (the lower floors are now all full of shops). He said that, no, he thinks this has always been a shopping center. I thought, “Yeah, just your average strip mall.”
These vents were embedded in the side of the building and I thought they were beautiful. 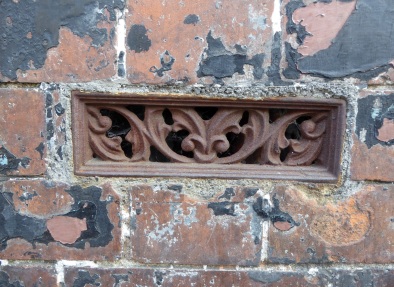 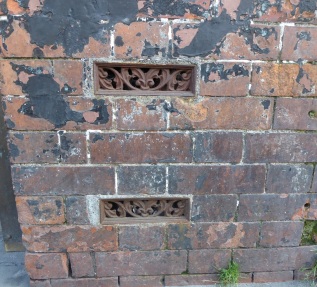 Stephen and I also went to a nearby botanic gardens where he was meeting some friends for a tour around.

Just your average botanic gardens, too? 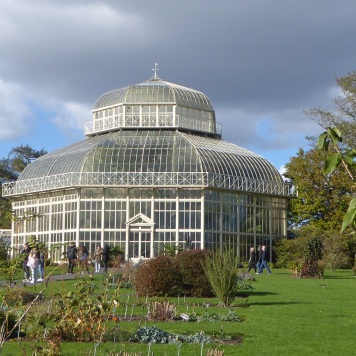 There was an open air art exhibit going on (which is what the tour was about). There were some interesting pieces. Some were a bit disturbing, too. I think “Blair Witch” and “Donny Darko”were mentioned…. 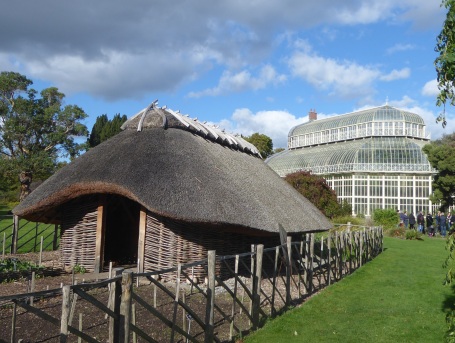 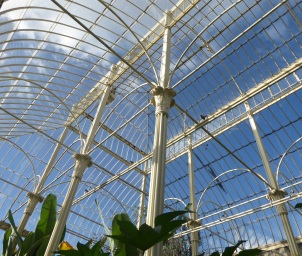 During most days, of course, Maurizio and Stephen had work to do so I bought a ‘hop on / hop off’ bus ticket and just toodled around Dublin a bit.

You can’t talk about Dublin without mentioning:
1) Guiness. The factory in the center of town emits a warm barley scent

2) the River Liffey which rises and ebbs with the tides. 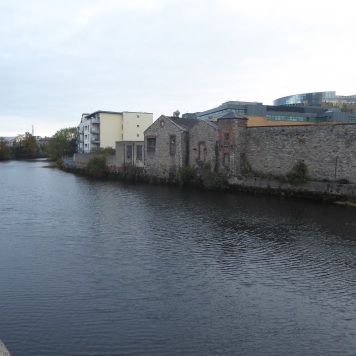 A few more pictures around the river.

Here are some pictures taken from the top of the bus (by the way, the weather was perfect the entire time I was there – mostly overcast. I loved it!). 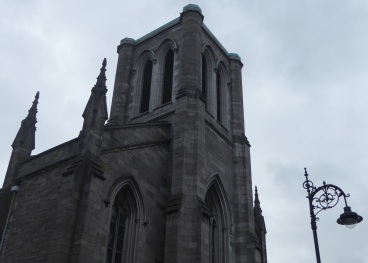 This is a side of the Guiness factory.

I didn’t take a tour because I’d done so nine years ago when I was here with my friends Amanda, Iain and Frank. We had a whirlwind couple of days in Dublin and it was great fun.
I ‘hopped off’ at Phoenix Park and had a walk around.

It is said to be the largest walled garden in Europe. It’s a beautiful, quiet place to get away from the city bustle. 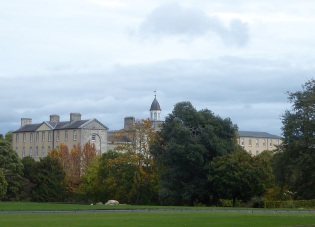 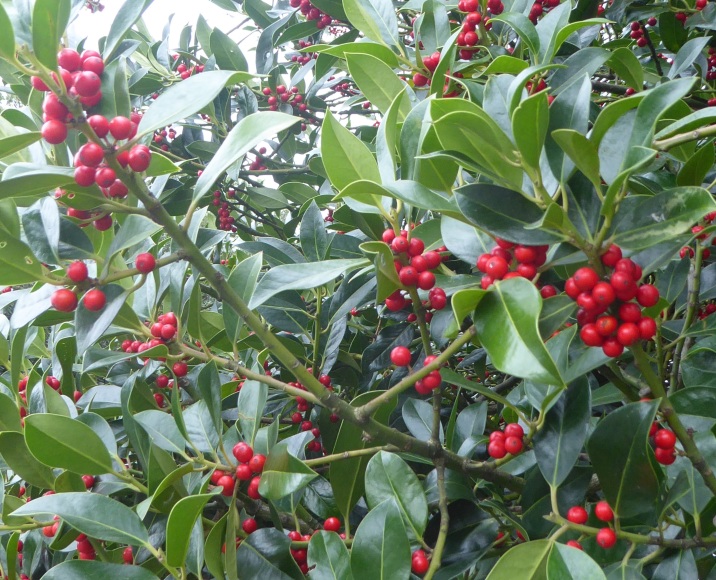 If I remember correctly, the bus driver said the street lamps are the last in Europe to be lit by gas. 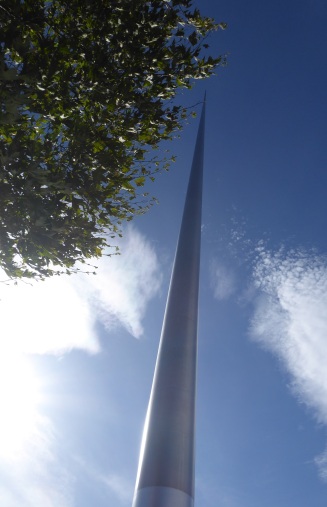 The Spire of Dublin (pictures taken from the bus). There’s an interesting history behind it from the IRA bombing in 1966 of the previous monument on the site (Nelson’s Pillar) to later dilapidation of the area and resistance to the design when construction began.
I again hopped off at Merrion Square Park because I wanted to see the Oscar Wilde statue.

Arrested, tried and imprisoned for ‘gross indecency’ – the ‘crime’ of being homosexual – a brilliant author and playwright, celebrated here in all his glory!

The last time I was in Dublin at Trinity College I saw this amazing bronze sculpture by Arnaldo Pomodoro and had to see it again. It is just stunning. It’s called Sphere Within Sphere.
It was, of course, great fun toodling around Dublin, but the best part by far (by leaps and bounds) was being with my friends. They are kind, fun, funny, intelligent, caring, witty, generous, wonderful men and I’m just in love with them. I’m lucky to call them friends. We had great conversations, good laughter, a few Guinesses and simply a warm, friendly time together. I treasure the time spent with my friends.

*Addendum: I stand corrected regarding Ireland being in the Schengen area. I just learned it is not. Neither is the U.K. They opted out of this agreement but they are, however, part of what is called the Common Travel Area. We’ll see how it all plays out when I get to England, I guess!

8 thoughts on “Dublin & my Friends”