I titled this ‘Part 1’ because I’ll be leaving Lisbon in a few days, but then coming back for a few more. At that time, I’ll be staying at another hostel in another neighborhood so I’ll most likely have different things to share with you. I have so many pictures to show you in this post that I’ll just get right into it. I’ll be displaying the pics in the order in which they downloaded from my camera. In other words, in the order I experienced them.
Here we go…

These first few pics are from around my neighborhood of Belém. 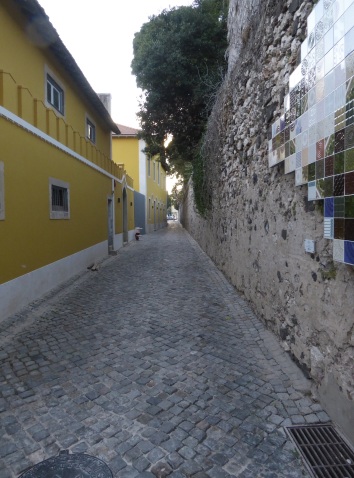 I love all the alleyways…. 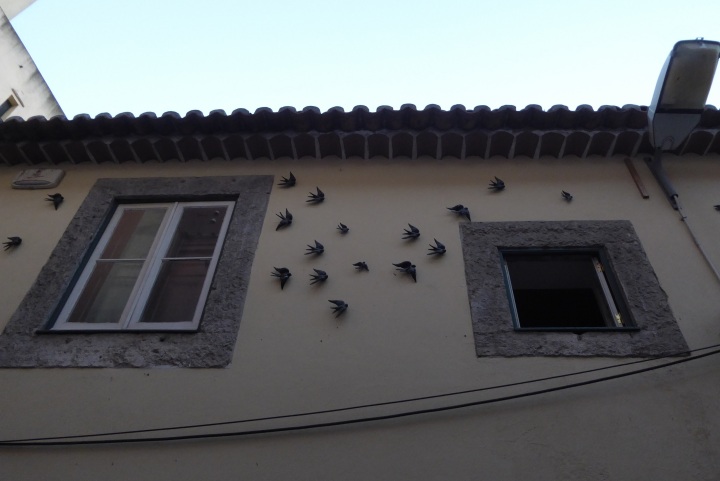 ….with the little surprises you’ll sometimes find inside. 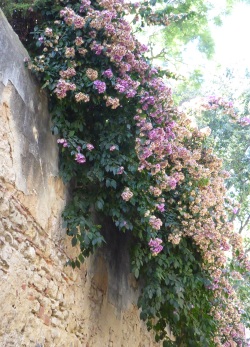 I went to the Alfama District in the center of old town Lisbon.

This is Tram 28 which everyone tells you you should ride if you’re in Lisbon. The problem (at least if you’re here in high season – which is ending soon) is that the line to get on the tram is ridiculously long. When I come back to Lisbon after my sojourn out of town, I’ll be staying closer to this area of town and it may be easier to give it a try. This time, I just walked up the hill…and then the next hill…. and the next…..

Well worth it for the views. 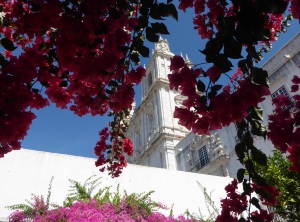 I’d heard there was an outdoor market on Tuesdays in this area, so I walked around until I stumbled upon it.

So many beautiful places covered with tile.

In fact, tile anyone? 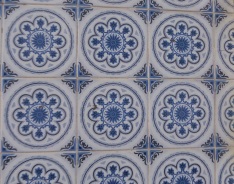 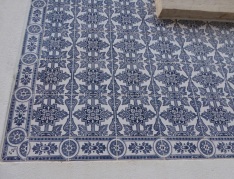 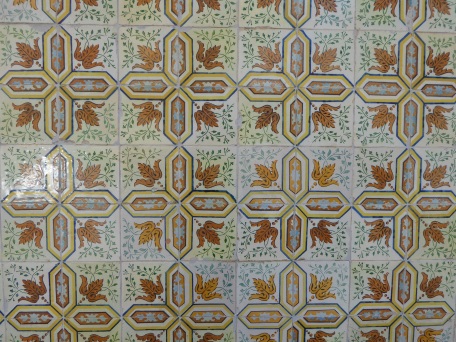 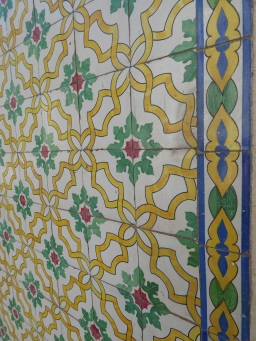 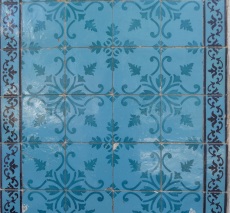 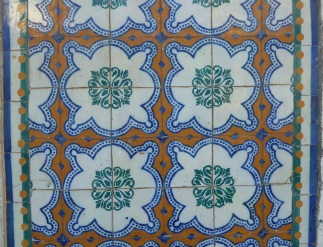 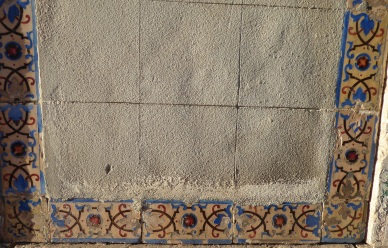 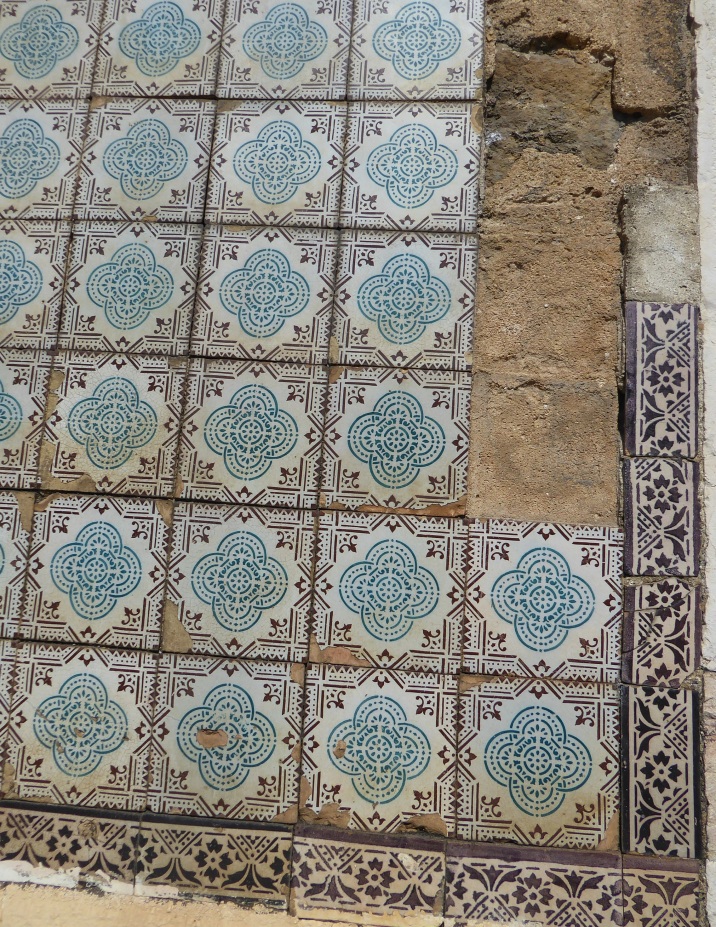 From different areas of town I’ve caught glimpses of this bridge which I’m calling the Golden Gate’s kid sister.

A few more pics from the Alfama area.

I’ll take the one on the left….

Here’s a tram coming down the street my hostel is on. 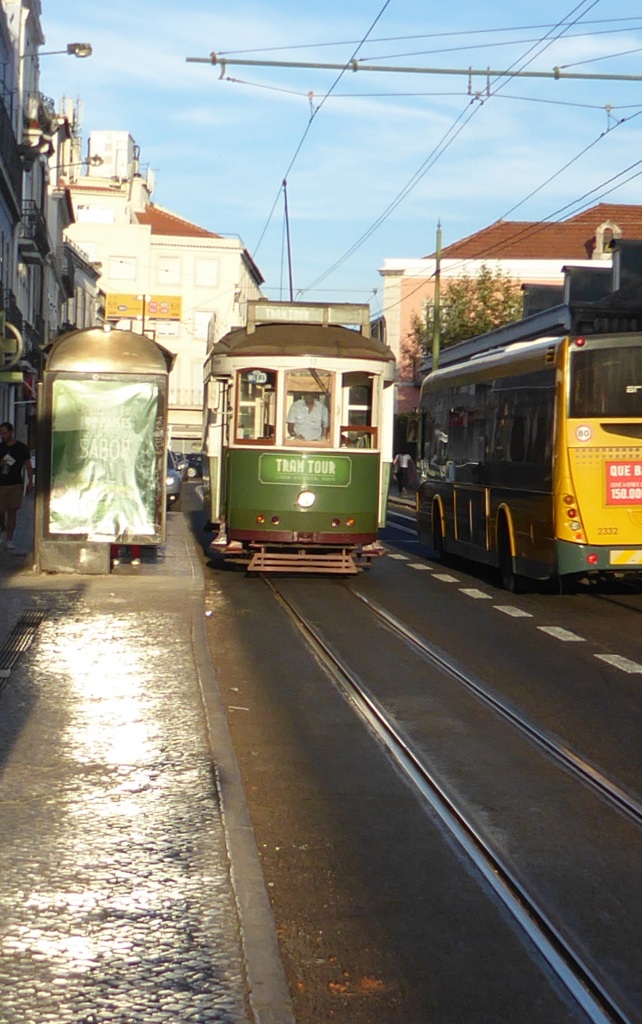 Look at the shiny reflection of the sun on the sidewalk.
Speaking of which…. 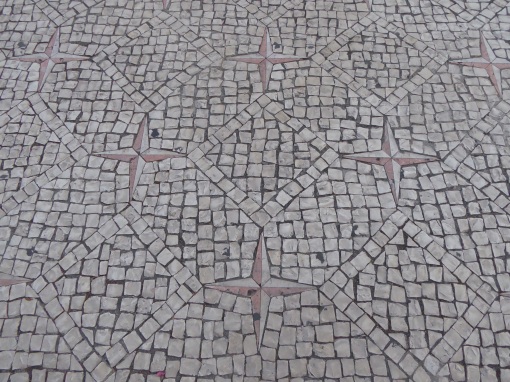 I’m probably overdoing it on the sidewalk thing, but it’s so impressive. I mean, everywhere – absolutely everywhere – you’ll find this type of sidewalk and it’s just mind-boggling to think of the hours, the days, the years it took to lay all these small marble pieces in place. And they’re laid so well.

One of the interesting things about it is that the tiles can sort of morph to the shape of growing tree roots and, I suppose, earthquakes. California could maybe learn something from this idea. The problem with using marble tile, although it’s extremely durable, is that it’s slick as snot! I hope it doesn’t rain while I’m here or I don’t think I’ll be able to walk anywhere without slipping and sliding all over the place.

Another day I went to Mercado da Ribeira a.k.a. Time Out Market. The first reference to the Mercado was in 1100! It has gone through fires, rebuilding, earthquakes, rebuilding, more fires and more rebuilding over all these centuries. Here are a few pics of its current state of being. 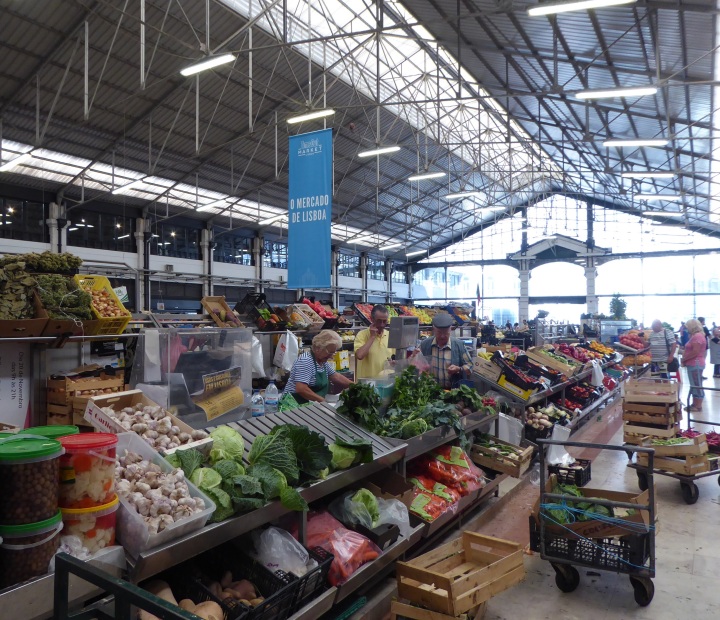 Here is the fruit, vegetable and floral section. There were large bags of bay leaves for 1 Euro!

The very kind woman who runs the hostel I’m staying at told me to go to this place within the Mercado for a pastéis de nata, a Portuguese egg tart pastry. Simply delicious, it has a hint of cinnamon and the crust is flaky, flaky phyllo. So good! 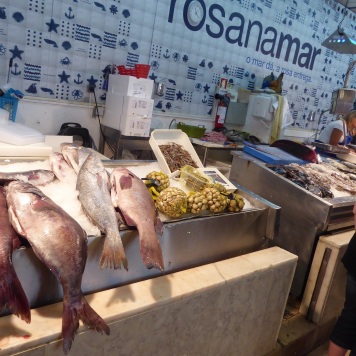 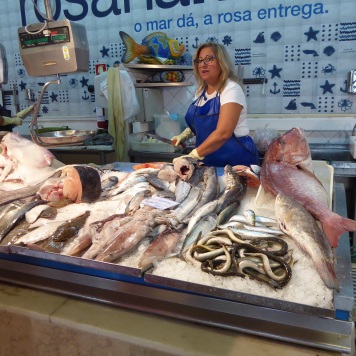 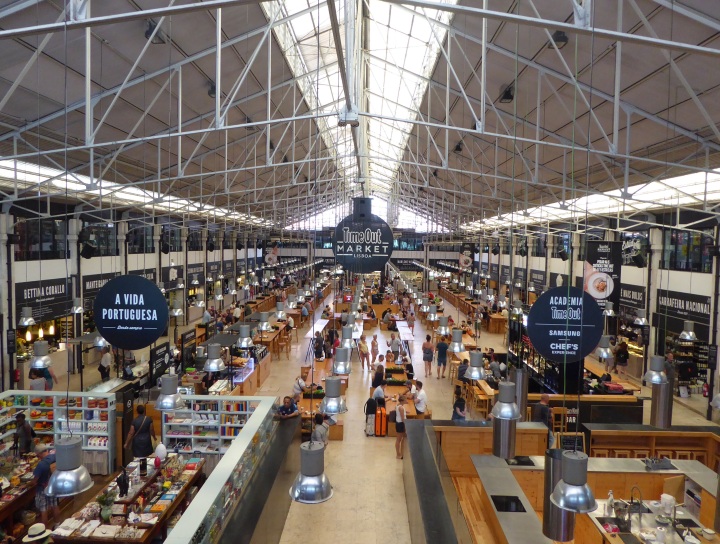 This is the very modern section in the middle. I ate a (rather over-priced) salmon tartar. I’d also bought some fruit.

I was there early when I took this pic. In about an hour or so it was packed! 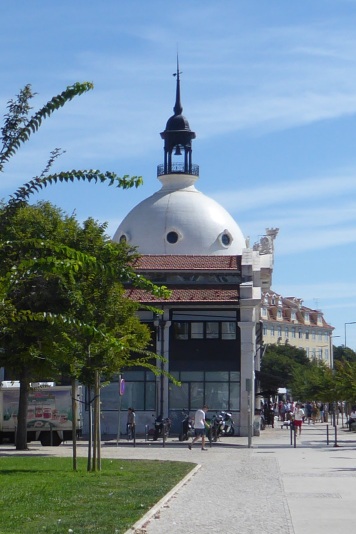 A couple of pics of the entryway with the local nickname of “Mesquita do Nabo” (Turnip Mosque).
In my ramblings around the Mercado, I got lost (whatever that means) and saw a few delightful sights. 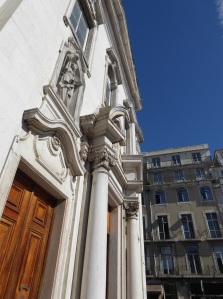 A church with a beautiful ceiling. 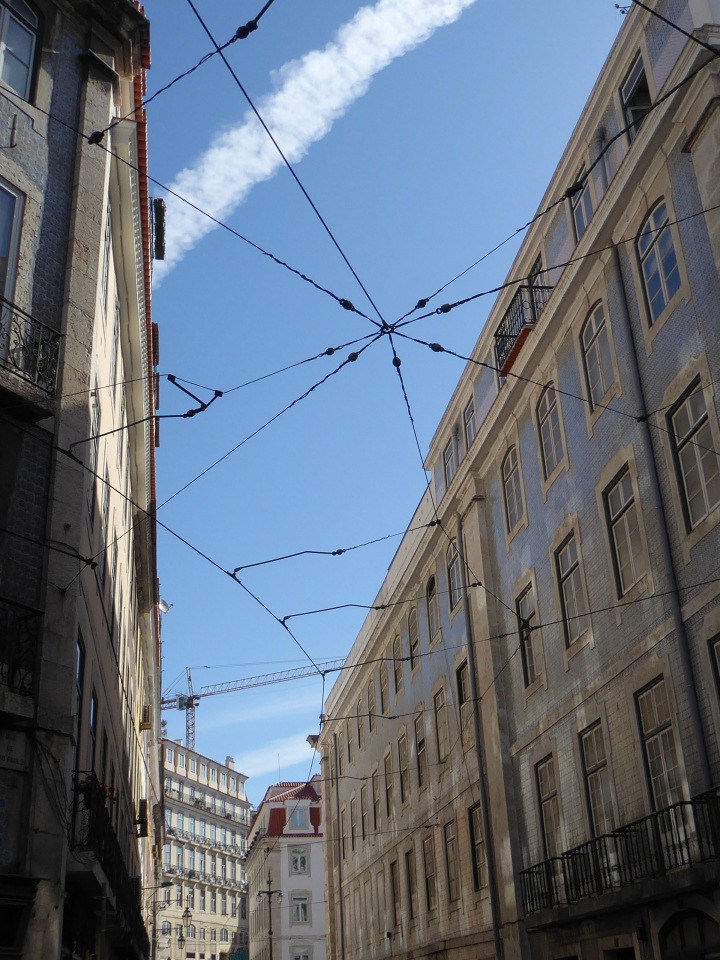 I’m probably trying to cram too much into this blog post, but this was only my first few days and there’s still so much more I’ve seen. I don’t want to get too far behind….so on we go.

The Botanical Garden. It is run by the local University and it’s just about to undergo a major renovation. I found it more interesting for the architecture and birds than for the gardens, really, but then again, a renovation is in the works. 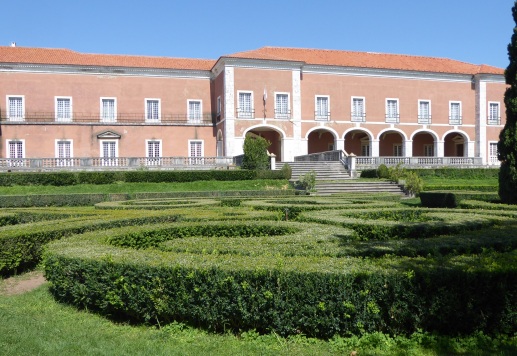 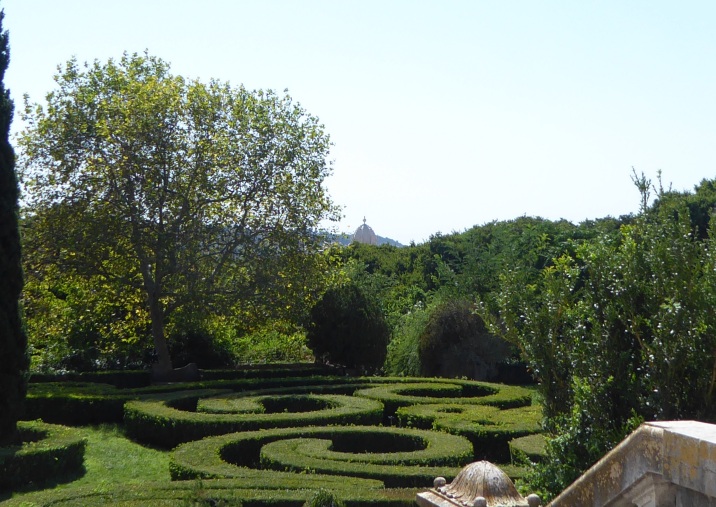 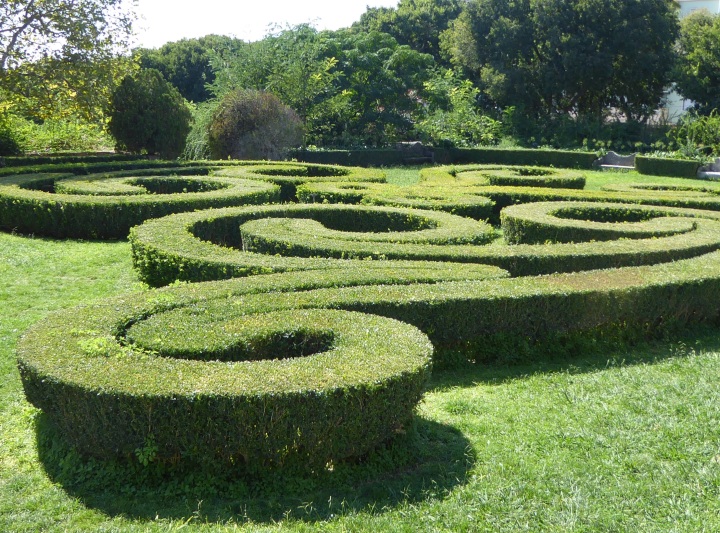 I’d love to do a needlepoint of this rooster some day.

When can I move in?

I love the way the vines stripped the walls of color…. 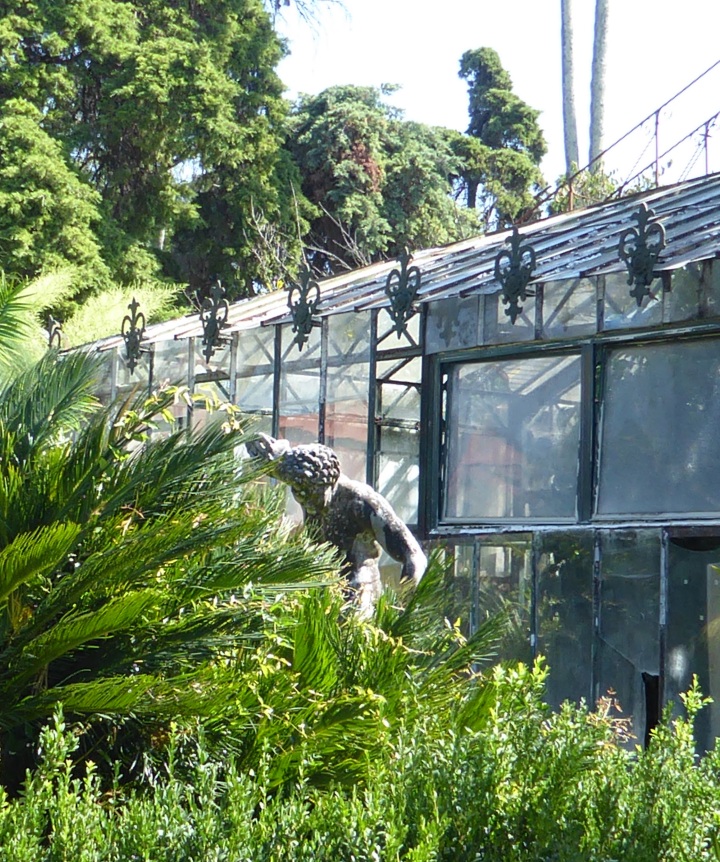 ….and the look of a place being reclaimed by plant life.

Throughout the gardens were these busts. I thought they looked absolutely regal. 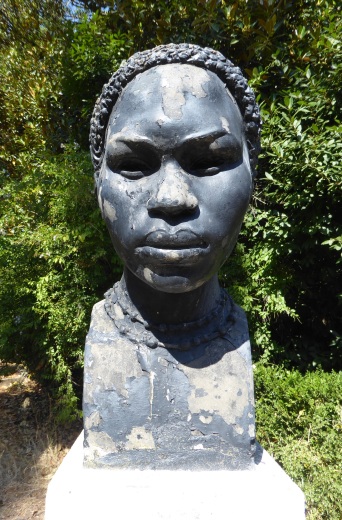 And last, but not least, you can never take enough pictures of peacocks, I always say (actually, I’ve never said that before in my life…). 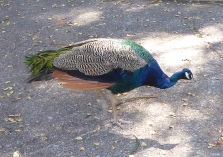 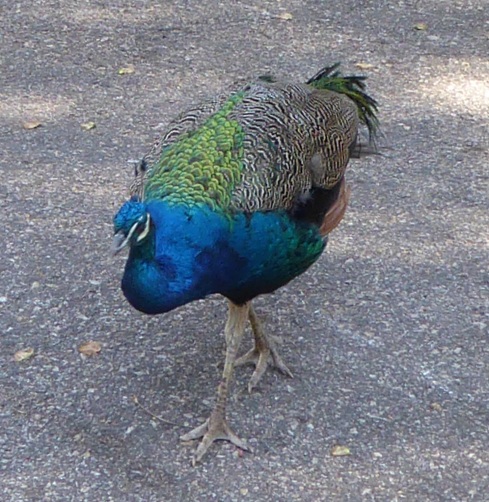 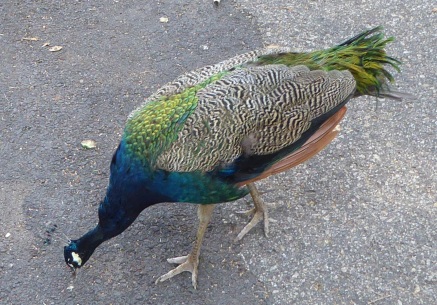 Well, that’s about it, finally. I went out today and saw a beautiful sight and will go out again tomorrow for a promising adventure.
Film at eleven….