I considered naming this blog post something like, “The Burnt-Out-on-Cities Person’s Guide to Medellin” or some such thing, but I figured that was a tad too wordy.

I’ve had a strange (but surprisingly enjoyable) time in Medellin. It’s not what I expected, anyway. And there’s the problem….

I’ve been staying in a nice hostel in a nice neighborhood surrounded by nice people, which is great. Right now I’m sitting on the hostel’s rooftop patio and I couldn’t be more content. 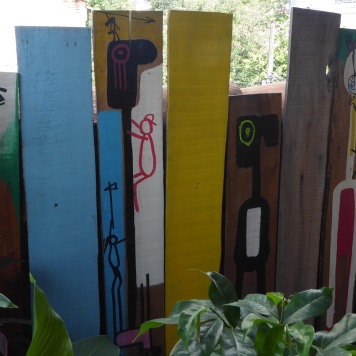 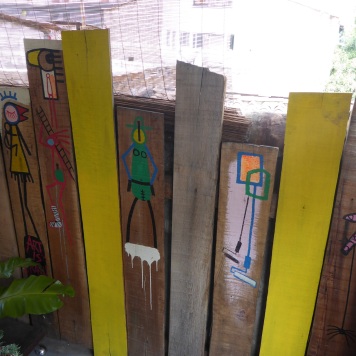 I hear conversations in a few different languages – French, Spanish, German….Unknown. Traffic off in the distance. A nice breeze floating by. Birds landing right next to me, not noticing I’m here. I could stay a while. But people have told me I should go to the center of town because that’s where the action is. Actually, I’ve alternatively been told to definitely go to City Center because it’s great and to avoid it at all costs. Okay. Helpful. But this seems normal when it comes to travel. You get opinions, which everyone has. My blog, for example, is just my opinion, my take on things. I didn’t enjoy Montevideo, Uruguay all that much, for example, but you might love it. If there’s one thing I’ve learned about traveling, it’s that you never know.

It’s just that so often you’ll hear great things about a place (such as Montevideo) and then once you’re there, you find yourself wondering why and thinking about the time and money you could’ve spent elsewhere. On the other hand, you go someplace you think might be sort of interesting and finding it vastly more interesting than you could possibly have imagined like the Salar de Uyuni in Bolivia ….and having a fantastic time. So, you take the good with the not so good and jumble it all together and you still come out on the positive side. Travel is something so enriching and mind-expanding I can do nothing but recommend it wholeheartedly. Save your money and go for it (…..and take responsibility for the pollution you create in your traveling and contribute to a carbon offset site – I’ve got to throw that in there. Just sayin’!). (:

Anyway, I’ve found, as I’ve indicated, I’m burnt out on cities. I’m much preferring the quiet countryside right now. Or, at least, this quiet rooftop. I didn’t realize my burn out was this intense until I got here to Medellin.

I look out my hostel window toward City Center and it looks enormous and full of skyscrapers and I’m just not interested. Also, I’ve been warned repeatedly about staying away from certain (ill-defined) areas of the city and to keep my belongings close to chest. I just don’t want to deal with that at this point. Most every ‘place of interest’ such as museums and the like are in City Center. But, I’ve walked around the area near my hostel and, for me, there are just as many ‘places of interest.’ I’ve found some parks nearby that are very nice to wander through. Quiet, butterflies, plant life. Heaven. 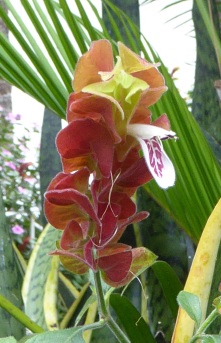 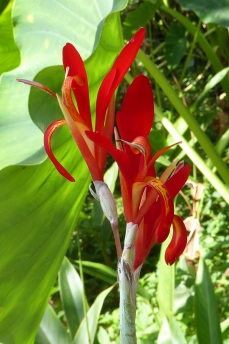 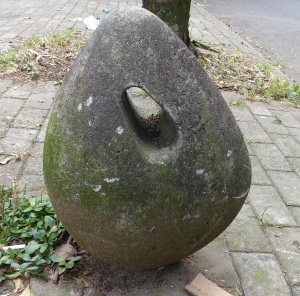 I thought this was a sculpture on the sidewalk until I saw more of them. It’s actually for chaining up your bike. I like it.

This tree has the same sort of moss growing on it that I saw in Savannah,  Georgia. 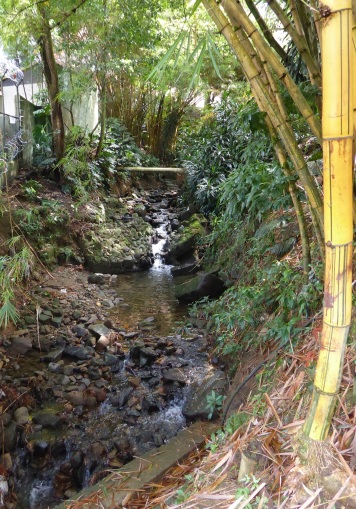 So, doing my darnedest to avoid deciding on whether or not to go to City Center, I went to a nearby town called Guatapé and here are some photos.

Actually, these first few pictures were taken in a small town on the way to Guatapé.

I’m not sure why I like this odd photo of a church so much. I think maybe it reminds me of something out of “The Omen”! Kind of creepy (though it’s one of my favorite movies – the original, of course!).

Here are a few views outside of Guatapé. 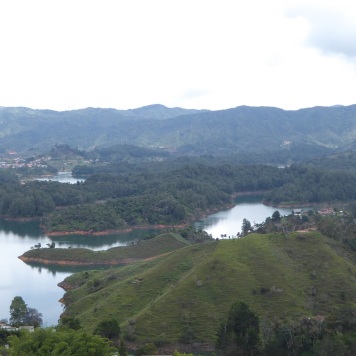 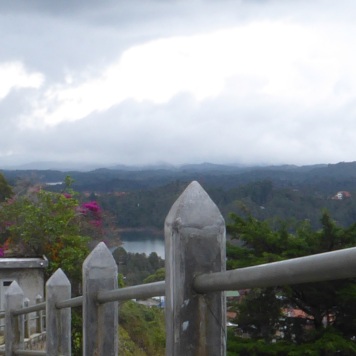 And here we are in Guatapé. 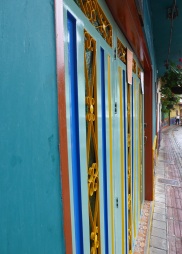 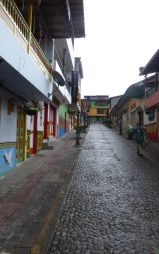 I think this town started off like any small village, but once it was realized they could make a tourist attraction out of it with all the painted houses, they went all out and painted everything. I think it’s a bit much, but, hey, to each his own. 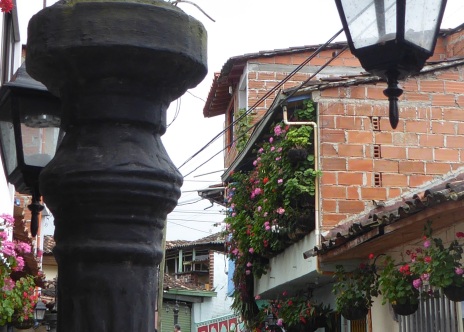 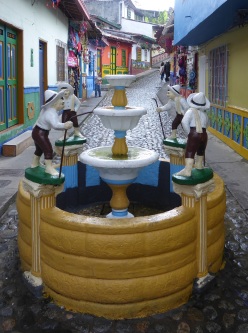 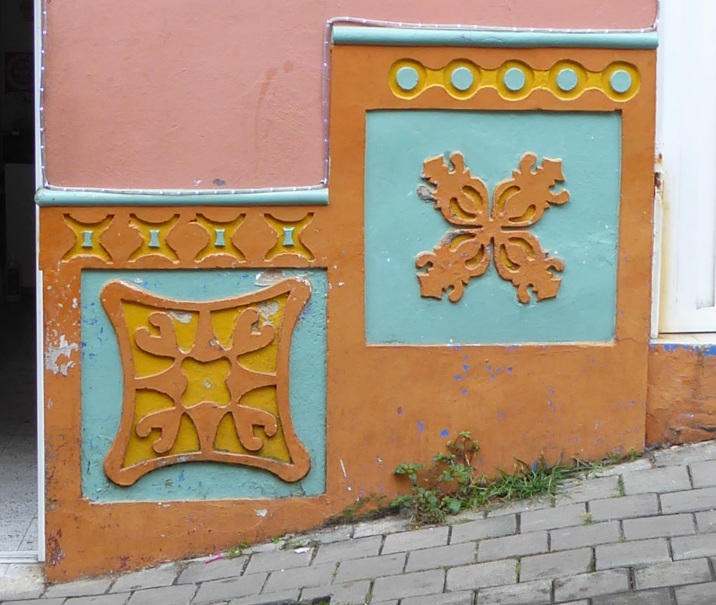 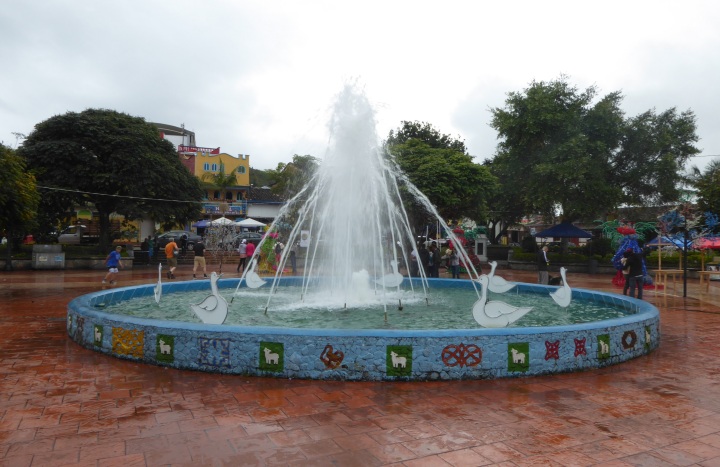 Yikes!
On the bus ride returning from Guatapé at around 8:00 p.m., dropping off passengers at City Center, I realized there was no way I wanted to go there. Geez, it looked chaotic. And not in a good way, to my eyes. Sometimes chaos can be invigorating and fun in a strange city. But, this just didn’t look all that fun or interesting, honestly. Maybe if I were fluent in the language. Maybe if I’d gone during the day first and had a sense of direction. Maybe if I weren’t so darned burnt out on cities. But none are the case for me at this point. So, I think I’ll pass.
Here are a few random pictures I’ve taken on my walks around the ‘hood.

Sometimes all it takes is color and pattern to catch my eye.

Or gargantuan bugs on walls.

Or Santa’s sleigh being pulled by seahorses.

I’ll be flying back to the U.S. soon….and landing in a city. A big one. Los Angeles. But, I’ll be staying with my son and his family and that makes all the difference in the world to me. Plus, while they’re at work and school, I’ll be able to work in their garden. Actually, I should say ‘I’ll get to play’ in their garden because that’s how much I enjoy it. I can hardly wait to get my hands in the dirt!

I certainly wouldn’t want to discourage anyone’s visit to Medellin (not that my little blog has that sort of influence). I can’t tell you how many people I’ve encountered who’ve raved about Medellin. Mostly they’re younger people wanting to party and I think they’ve found that here. But that’s no longer my thing. 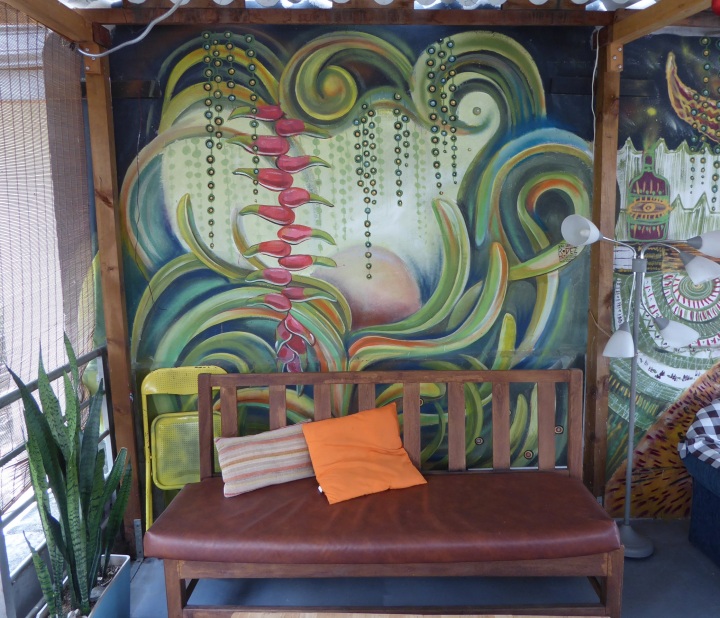 Give me a quiet rooftop patio or a garden to play in. Though I haven’t gone to City Center and seen the tourist sights and the museums and whatnot, I’ve enjoyed my stay here in my little hostel, on my little rooftop in my nice little neighborhood.

A couple views of the moon on New Year’s Eve. 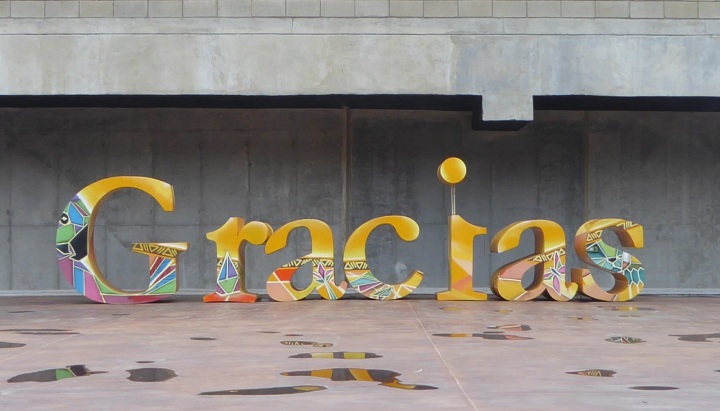