I left Buenos Aires on Friday, November 3rd and after a long, exhausting day and night, arrived here at San Pedro de Atacama, Chile on Saturday. My flight took me from B.A. to San Jose, Argentina where I had a brief layover. From there, we flew over the Andes to Santiago, Chile and here are a few pics from that flight. This first pic is from take-off at San Jose (remember, you can click on each picture for a better view).

Flying over the Andes.

Over the Andes and under the clouds. 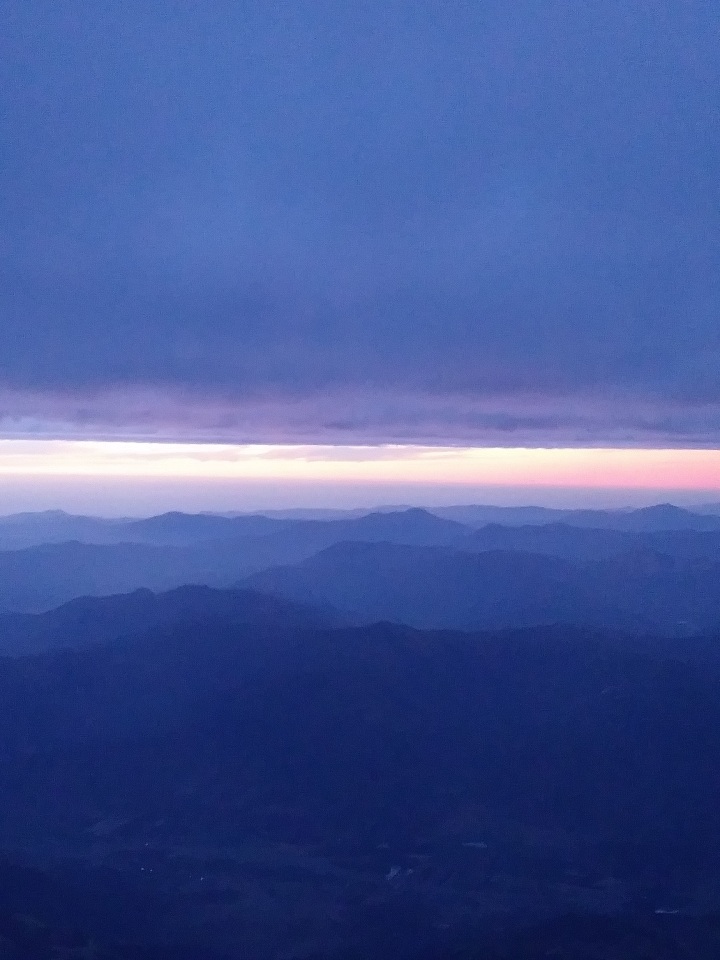 And over the clouds.

At Santiago I had a 9 hour layover. To save money (and to avoid possibly missing my flight), I didn’t rent a hostel and decided to wait it out at the airport. I ‘slept’ (read: ‘attempted to sleep’) on the airport floor. Omigod, it was a long night. Finally, blissfully, my outward bound flight took me to Calama, Chile. Just outside of Calama is the world’s largest copper mine… and I really wish I could have got a picture of it. Unfortunately, the reflection of my camera on the window obscured the shot. But it was fascinating to see. It was just this huge, spiraling hole in the ground. Huge!
But, I did get a couple of shots of the desert.

We are talking desert, here. It’s dry. Really dry. In fact, at 7,900 ft. / 2,408 m., the Atacama Desert is the driest non-polar desert in the world.
Flying over this, I had to wonder how or why a town was ever established here. How could it support any life? Then I saw this:

Flowing through that gorge is a river. A small one, but a river nonetheless. I’ve had difficulty finding out the name of it. On the drive in from Calama to San Pedro de Atacama (about an hour’s drive), I saw a road sign saying, “Rio Grande.” I’ve also seen the name Salar de Atacama, so I’m not sure what’s what as far as that goes. But, regardless of the name, I guess that answers the question as to how a town was established here.
Here are a few pics of my first wanderings around in the town.

In the main square they were having a sort of children’s fair or festival. Lots of tents with activities for the schoolkids of the town. 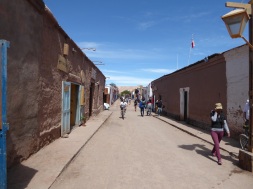 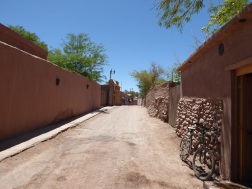 Most of the streets are dirt, but a few are paved with brick. 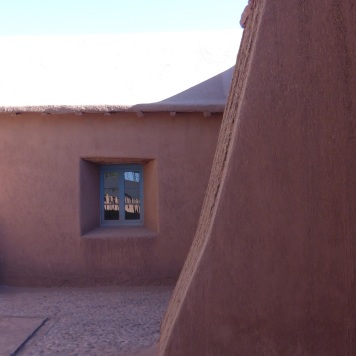 Here is a small canal that runs through the town. From what I understand, it is water used for irrigating food crops. When I say ‘small’ canal, I mean small.
This picture was taken as I stood straddling it. The water here is clean, but not recommended for drinking due to the very high mineral content.

So, there are rumors of U.F.O.’s landing around this area and I caught this sight.

Okay, it’s just an example of my lousy ability to capture night shots. The largest of the lights (visible left of center) is the moon coming up between two mountains. I wish I could’ve got the shot because the moon appeared huge. Really pretty.

An old fire hydrant. Not sure if it’s still in use. There is a thoroughly modern fire department nearby, though.

Anybody who knows me, knows that it has been sheer torment to walk into the shops and see row after row of this beautiful fabric and then walk out without buying anything. Being that I’m carrying everything in a backpack, I can’t be buying anything heavy.

A few shots of doors. What is it about doors that I like so much? To me, they’re art. 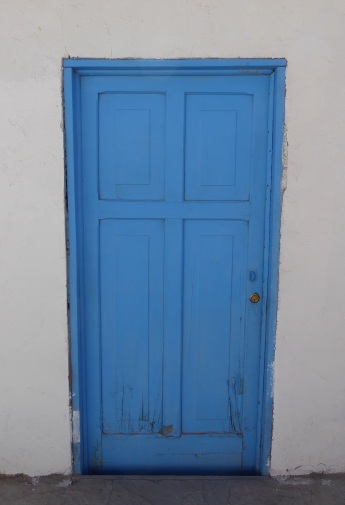 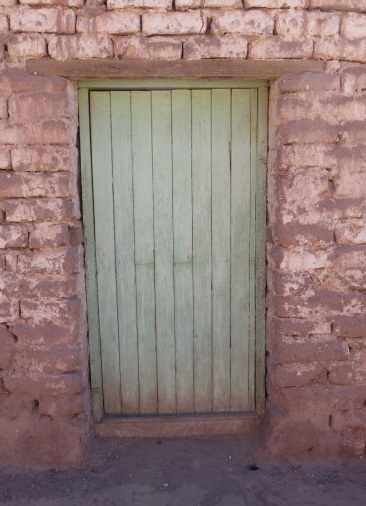 This has become a regular stop. A great place between town and my hostel to pick up fruits and veggies…..

…and to stop for a Mote con Huesillo.

I can’t figure out the exact translation, but it’s a cold fruit drink. It’s got two stewed peaches in it with (believe it or not) cooked barley sitting at the bottom! I think the liquid is the stewing juice from the peaches, watered down (it’s not thick or syrupy), and probably with some honey added. Anyway, it’s delicious and practically a complete meal!

This was an unbelievably delicious stir fry I had at a restaurant. I don’t know what seasonings they used, but it definitely wasn’t what you’d typically think of as stir fry. It also had mango pieces in it.
Soooooooo good!

But, here’s what I had for dinner last night.

I chopped up pears and loquats that I’d got at the fruit stand and poured some delicious yogurt over it. And a side of potato chips! I was so craving potato chips yesterday!

The yogurt I’ve had in South America is so good. It’s thinner than the yogurt you get in the States, but thicker than kefir and it doesn’t have kefir’s tang. It’s got such a nice, honey-infused flavor. Hard to describe.

So, as the title implies, these are just my first impressions. There’s more to the town that I’d like to explore.  There’s an artisanal market I’d like to see. Also, there’s a meteorite museum and an ancient history museum.
I’ve got to get my timing down, I think. Mornings and evenings are best for going out because it’s so hot during midday – it just makes you lethargic. But, some of the businesses aren’t open when it’s nicer to go out. Well, I’ll get it figured out…. or I won’t. We’ll see.