If the beginning of this venture hadn’t been so expensive, so unbelievably costly, so financially draining, it would have been funny…. absofuckinglutely hilarious.

I took the bus/train from Salinas to Hayward to check out a van. I’d been looking online and in the local auto sales rag for vans for a few months and had checked out a few and thought this one in Hayward seemed worth a look. It was a Ford Econoline. Old (1990), but with not too terribly many miles on it (100,000) – about what I’d expect to find for what I’d been seeing out there and what I wanted to spend ($4,000 or less). The engine looked and sounded good. It was clean. New battery. New tires. New brakes. Interior was in good shape. It seemed to have pretty good pick up. After so much looking around I was at a point I knew I just needed to take the plunge and make a purchase. They were asking $3,500 for it and I talked them down to $3,250. Finally, I had a van and my plans to get on the road were actually coming to life. So, after spending a good portion of that day getting to Hayward (about 2½ hours from Salinas, but longer via bus/train what with layovers), making the deal and fueling up, I headed back in my ‘new’ van. It grew dark on the way back but I made it safely to Salinas, whereupon, the van died. Sputter, sputter, dead. I was able to pull it onto a side street while it was still in its death throes, but not to the curb – stuck right there in the middle of the street at night. A police officer pulled up and asked what was going on. I told him and he kindly gave me a push to the curb at which time I called AAA which towed me to my mechanic’s then took me home. Nice first day with the van, eh?

Turns out it was the fuel pump (remember that, it makes another appearance in the story later on). So, okay, I got the fuel pump fixed. My mechanic said to take it for a drive and ‘see how she runs.’ I take her out and get onto Highway 1 whereupon, she dies. Sputter, sputter, dead. Grumble, moan, NO! (that part was me). Once again I call AAA and got towed back to my mechanic’s. This time it’s the alternator. Okay, got the alternator replaced. Also got the automatic window motors replaced so the windows could go up and down (I would much prefer manual crank windows, but ah, well, that’s what’s in the van).

The van’s steering was a little loose from the get-go. Not terrible, but enough to be of some concern, so back to the mechanic’s and he tells me it’s the tie rods – that they need replacing and that I should go in for an alignment once they’re done, so that everything’s, well, aligned. After the tie rods are done, the alignment guys do their job but then tell me the steering’s still going to be a bit ‘off’ unless I have the gear box replaced. Soooooo, I get that done. Okay, now the steering feels a lot better. Cool. Now we’re cooking with gas, right? Right?

I drive it around to test it out – take it over to Monterey on the weekends to do grocery shopping, you know, just drive it here and there. Then I start hearing this noise. This weird, high pitched whine. Not constant. It just starts whining then after a while, it stops. It doesn’t seem to change the speed or have any other effect that I can detect, but I know this noise can’t be good.

It wasn’t good. It was the transmission. Yes, the transmission. You knew that was coming, didn’t you? I have to say, I did. There were a couple other things that were going on (I won’t bore you with those) that raised my suspicions. So, I call a transmission guy to set up an appointment. I drive over the morning of the appointment and he says, “Oh, I can’t take the van today – I’ve got too much going on here and I have no place to park it.” …..well, then why did you tell me to bring it over? So, I drive it back to my place and just as I was pulling it over to the curb to park it, steam, smoke (I don’t know what it is), something is fuming out of the engine and that whine…? ….it is now a great, bellowing moan.

Vehicles are such wonderful places in which to scream and let out your frustrations, aren’t they? They’re like little personal therapy booths. I’m at my wits end at this point. Screaming, pounding on the steering wheel, “Fuck!!! Shit!!! Fucking van!!!!” I get out, lock it up and walk away. Just step away from the van, girl. Just take a deep breath and leave. Now….before you start kicking it.

I called the transmission guy again and asked about an appointment that meant something – that was like, you know, an appointment? We set up a time and the morning of that appointment, I called him again just to be sure he really understood what an appointment is and then called AAA again and had them tow the van over (after all that smoke or steam billowing out of it, I wasn’t about to drive it). A ridiculous sum of money later, I have a new transmission.

BUT, and it’s a big but (some day we can talk about your big but), the transmission guy says, “You know, it’s kinda funny, but I think you have a fuel leak and maybe a radiator leak so you’d better get that checked out.” He apparently doesn’t understand what ‘funny’ means, either.

Back to my mechanic and he tells me that the fuel pump I’d had replaced (remember?) is broken. A chunk is broken off and can’t be repaired – the entire part has to be replaced and it’ll take a few days (after the upcoming weekend) for the part to arrive. He thinks the transmission guy must have broken it when they lifted the van to do that repair. So I call the transmission guy and tell him this. “No, no,” he says, “that can’t be. No, we didn’t touch that part of the van.” My mechanic is not convinced. He asked me if I’d had anything else done (like get the van jacked up for a tire repair or something) and I told him no. So, I asked the transmission guy and my mechanic to talk to each other since they have a better idea of where the fuel pump is in the van. Well, the transmission guy would not admit fault and I really have no way to prove that he broke it so I’m stuck with having to get the part replaced again.

You still with me? At the same time all this is going on, I’m running out of time in my apartment – I’d already put in my 30 day notice. I’ll spare you all the house cleaning, running around, closing out accounts, getting furniture moved and given away, taken to Sacramento, to Oakland, then back to Salinas to get the fuel pump replaced (there are two tanks in the van and each one has its own pump, so I was still able to drive it without the one pump as long as I only used the one tank), spending the night in the van in the mechanic’s parking lot (ssshhhh, don’t tell him) because he’d been sent a bad (leaky) replacement fuel pump the first time and had to order another one so I had to wait another day before I could leave and I had already vacated my apartment, plus it turned out a fuel line had been cut (probably vandalized to steal gas – hey, gas prices are high…..) so that had to be repaired, oh yeah, and getting the water pump replaced (it wasn’t the radiator – that’s what all those fumes were from), so, yeah, it’s been hectic…..and insanely expensive. ….wow, I guess I didn’t spare you all that much, did I?

You know, a few people have said I should just sell the van and start over….but think about it – who would buy it? Who could I sell it to with anything like a clear conscience? Plus I’ve already put so much money into it and I’d never get anywhere near that much money back. I just need the damn thing to run.

I was Skyping with Mike and told him I think I’ve bought the ‘Murphy’s Law’ of vans. He said I should name the van Murphy. I think that’s a damned good idea. Ladies and gentlemen, brothers and sisters, comrades and friends, I give you….. 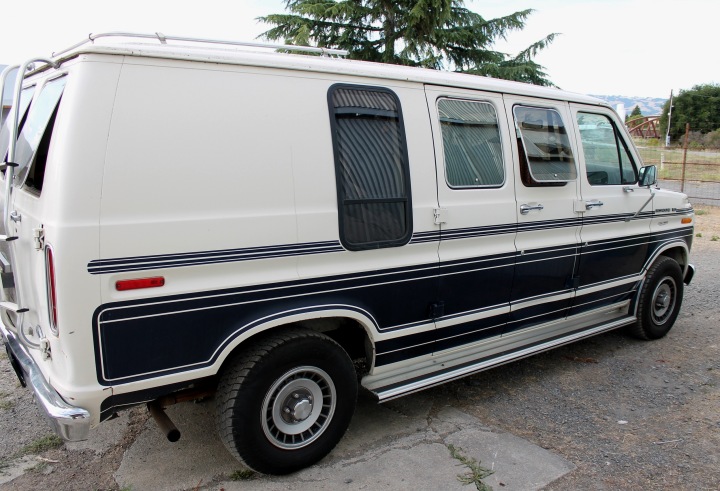