Hi – I’m still here. Still kicking.
Sorry I’ve been away so long – I’ve been drowning in paperwork. I didn’t think there’d ever be an end to it. Just when I’d think I was about done, I’d see another stack, another folder, another box that still needed going through, sorting, purging. Not just my own stuff – my mother’s, too. I’m still not at the end of it. There’s more. But I am finally seeing some light at the end of the tunnel. Some distant, vague light in what’s seemed like an endless tunnel.
So, here’s what’s been going on: I still hate my job. I know, big surprise, right? That being said, I’m doing something about it. Trying to make a change. But, damn, it’s been (and continues to be, she said, impatiently) a long process. In my effort to get out of here and travel some more (my heart’s desire) I’ve been trying to reduce the amount of stuff I own. I would love to just pick up and go…but then, what do I do with my stuff? I’ve realized I’m chained down by ‘stuff’ and I can’t stand it. So, I’m giving family stuff to my kids, other nice and hopefully useful stuff to friends, trying to sell stuff I’ve made on etsy, selling other stuff no one in the family wants (but is ‘good stuff’) on craigslist and giving the rest to thrift stores.
Now, at the same time as all this, it became necessary to go through my mother’s stuff. My sister (who lives in Oregon) has gone to our mother’s house (in southern California) numerous times over the years. At first it was to help Mom through illnesses and the aftermaths of surgeries (thank you, Georgia!) and finally to clear Mom’s house out so it can be sold. I wanted to help as much as possible, but being stuck to the job, it was not always easy to get away. I did make it down there a couple of times, though, in the past two months. Each time bringing back with me boxes of papers and photo albums to sort through. Good god.

Here are twelve boxes filled with photo albums that I brought back on my most recent trip.  This is in addition to the six or more boxes I brought back last time.

My mom was a world traveler. She’d been everywhere and she and my stepfather took a picture of every single thing they ever laid their eyes on.  Geeeezz!!
I mean every beach, hotel room, mountain, temple, church, bird, flea market, swimming pool, skyscraper, ocean wave and plate of food they ate. Countless pictures. I took on the task of going through all this, culling the more unique pictures and some great pics of Mom.
She also kept a daily journal. She of course wrote what went on during the day, but mostly having to do with the cost of things (having been brought up during the Depression, she was frugal to the extreme) and what she’d had for dinner. Go figure. She also wrote about her travels and, though she would mention where she’d been, what she’d comment on mostly was the cost of it….and what she ate for dinner!
So, yes, I’ve been going through all my own stuff and a whole lot of my mother’s stuff and I still have a long way to go. In the meantime, I’m sticking with the job and saving money. As I know I’ve said before, the dichotomy of my life is that I love both home and travel. Wherever I’ve lived, I’ve tried to make it homey and cozy. But right now my place is a wreck. I’ve been removing art from the walls and patching up the holes. There are boxes of things I’ll be giving away piled up in the living room. The ‘Cozy Corner’ is disassembled. It actually does look like I’m getting ready to move and I’d go now if I could, but I do need to set myself up financially a bit better. Probably a lot better……and get rid of more stuff….
I ricochet on a daily – hell, sometimes an hourly – basis between, “Hang in there, kid. Set yourself up better financially – you’ll be glad you did” and “If I don’t get out of here as soon as possible, I’m going to lose my heart, mind and connection to reality.” We’ll see how it goes…..
I’ve got to do this. I’ve got to get out of here.  It’s a need. Maybe I don’t have the drive, the courage, the stamina, the…I don’t know what to call it, but I can’t seem to be in this stifling, depressing 8 to 5 job and have any creativity or sense of a life at the same time. The two just don’t seem to mix. Oil and water.
I’ve never been one for resolutions. Well, maybe early in life, but I gave up on them a long time ago. I’ve seen how they tend to peter out and die inglorious deaths. So I’m not making a resolution now, but I’ve set my focus on getting the hell out of here. Out of Salinas, out of this miserable job and on the road and I admit I am using the ‘New Year’ as a starting point now. Focus. My focus is becoming keener.
Life is precious. So I’m finally pulling my head out of my…..eerrr…. I’m re-assessing and appreciating what I have. While I’m still living here, I’ll try to get out more often on the weekends, explore the surrounding area and try to not be such a grey, miasmic hermit. I did go to the Aquarium again last weekend. I probably won’t renew my membership, so I’ll go there as much as I can while I can.  Here are a few pics of that visit: 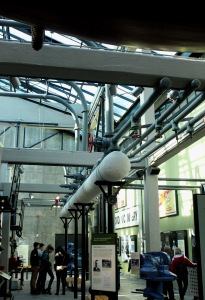 One thing I love about this place is the place itself.  I love the Industrial feel of it….

I wonder how many people are barfing out there……… 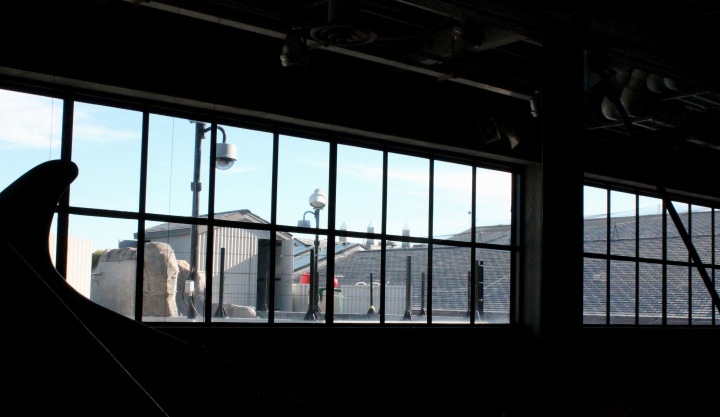 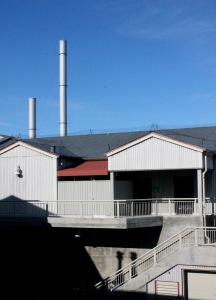 I love that they’ve kept to the original appearance of the building.  The smokestacks are from the Hovden Cannery which had once been on this site. 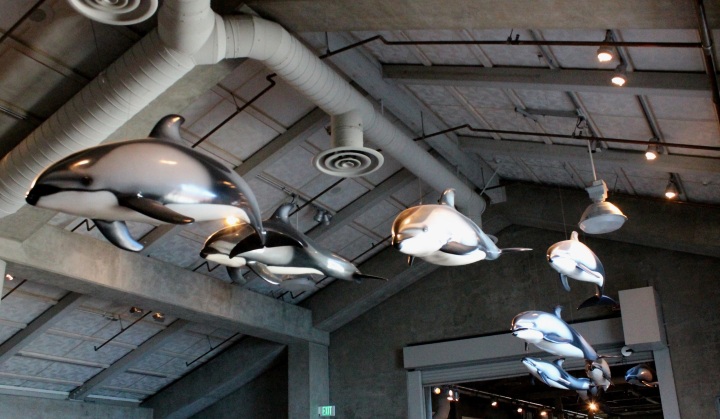 I don’t remember what this fish is called, but I found it difficult to tell where it ended and the fish behind it began!

This little guy was….. little!
It was no more than a half inch long. 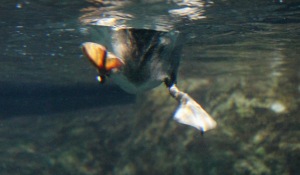 Everybody watching these birds were laughing!  It’s so fun to be able to see them both above and below the water. 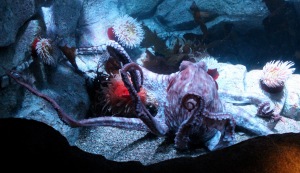 I finally saw the octopus moving around.  Every time I’ve been there before it was curled up in a corner….sleeping?

Finally, I have a picture of my mom that I’ve scanned.  I don’t know where she was when it was taken.  Probably some far off land.  In a way, to me, it doesn’t matter where she was.  I just love that she appears to be very happy having an adventure.

2 thoughts on “Stuff and more stuff”