I’m still here!  I’m not lost in space.  I’ve been lost in Vancouver, Washington, Chico, California….. Sacramento…..Paradise.   Not lost, really…..just floating.  It’s been great being with family and friends, but also disorienting being without a job and a ‘home base.’  I’m such a homebody and in some ways a creature of habit that it feels strange being a ‘couch surfer.’  But, like I said, it’s been wonderful seeing my kids, grandkids and friends.  After visiting friends in the Bay Area, as I wrote in my last post, I went to Paradise and Chico to visit more friends.  From there I hitched a ride with Dee up to Wilsonville, Oregon.  Along the way we passed by Mount Shasta.  Lovely beast, isn’t she?

And, speaking of beasts, here is a pic of a homemade dragon someone built out along the highway near Shasta.  Look at that wide open sky.  I’ve really missed that.  I’ve got to say it……I love California. 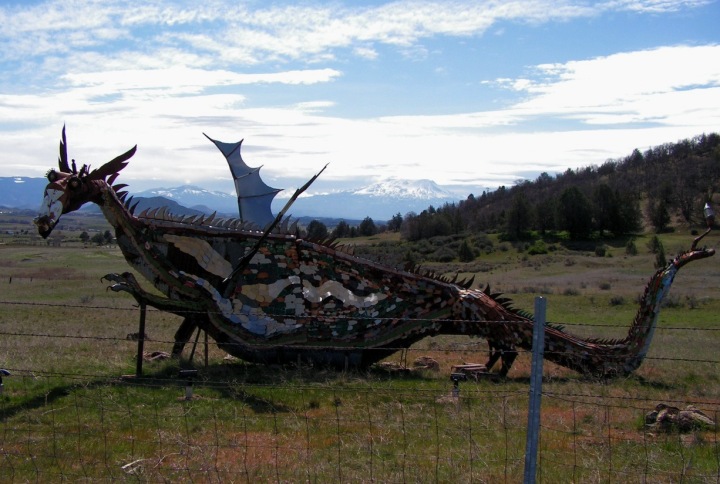 My wonderful son-in-law, Nick picked me up in Wilsonville and we went to Vancouver, Washington where he lives (actually, lived…..more on that later) with my daughter, Annie and their daughter, Éva.   Now, when it comes to taking pictures of mountains or rocks or flowers or architectural detail or bridges or buildings…..I do just fine.  When it comes to taking pictures of people…..I suck.  It’s just that simple.  For one thing, I usually just plain forget to take pictures at all.  I mean, when I’m with people (especially people I haven’t seen in a while) I’m talking with them, joking, telling stories, laughing, having a good time.  I’m generally not thinking, “Oh, I should get my camera and capture this moment….”  I’m just in the moment, you know?  Enjoying it, enjoying my friendships, my family…..the moment.  Anyway, suffice it to say, I’m not well practiced in photographing people.  So now that I’ve excused my ineptness, I’ll post the best of the pictures I actually did remember to take.

When I arrived at their house, I was delighted to see that my granddaughter, Dominique, was there.  She lives with her mother in Portland, Oregon, just across the border from Vancouver.  She’s my son Paul’s daughter.  It was Easter weekend and Dom was staying for a few days.  Yay!  Is this girl adorable, or what?

And speaking of adorableness…..here is Éva, my first grandchild.  She’s helping Dom color Easter eggs.  Dom adores Éva and Éva adores Dom and I adore them both.  They are the sweetest, kindest, smartest, funniest, prettiest granddaughters in the world.  I know…..you think you have the most wonderful granddaughters in the world, but nope….. they’re mine.  (:
Here are a few pics of Dom during her Easter egg hunt and decorating the traditional (?) Easter egg tree. 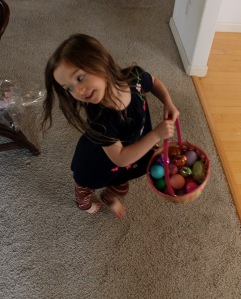 …and some pics later that day out front.  Dom had got some sidewalk chalk for Easter so we decorated the driveway…..we had to…..it was quite bland.

I had a big task to accomplish while I was at Nick and Annie’s.  They’d been graciously holding on to all my stuff for me since before I left for Viet Nam. All of it. Everything. I’d always known they wouldn’t be staying in Vancouver  forever and I’d have to either settle back in to the States in a place of my own so I could keep it all  or have a massive garage sale. They’re moving sooner than expected so……..garage sale it is……I’m definitely not ready to move back.  I’d already purged a lot of things before I brought everything to their house for storage, so I culled from the best of the best, so to speak.  I can’t think how many times I’ve said to myself, “It’s just stuff.  I don’t want to be possessed by my possessions.”  But sitting out in the garage on a couple of cold, cold days, I couldn’t help but reflect on how I really felt about it.  There was a bittersweetness to be acknowledged.  It’s not necessarily the physical properties of the things I saw going out the door balanced precariously in a stranger’s arms.  It’s not even the memories of those things.  My memories are my own and they stay with me.  I guess it’s this:  the comfort.  That comfort level that comes with being surrounded by the things that are so familiar to you.  Your books, your collections of silly things, pretty things, crafty things.  I’d have to say the books were one of the hardest parts of the cull. I get pretty attached to my books. But there are still thrift stores and yard sales out there so I can always pick up more someday. That’s where I got most of the books I’ve had all these years anyway.  And I was happy to see some of my things going to people who really seemed to appreciate them.  Like my old typewriter.  I got the full price I was asking for it plus a promise from the buyer not to sacrifice that beautiful piece of mechanical architectural history in order to make some faddish pieces of jewelry.

Here’s an old picture of it from when I had it decorated for Christmas a few years ago. Purty, huh?

Actually, I was glad to find out they’re moving while I was there instead of being on the other side of the planet and having either to come back and deal with it or burden them with it all on top of their own stuff. They’ve done enough for me as it is……..thank you again you guys…… (:  So anyway, I’m still holding on to some of my things for when I do finally settle down somewhere and honestly, I can make a home anywhere out of anything.  It’s all good.  The garage sale was a success.

Here’s a pic of Éva with her Dad learning something new on the keyboard…..speaking of which…..

Nick, Annie and Éva have a band named The Volt Per Octaves.  The name derives from (according to Wikipedia) ‘an analog method of controlling synthesizers, drum machines and other similar equipment with external sequencers’ and according to dictionary.com ~ ‘Of or pertaining to a mechanism that represents data by measurement of a continuous physical variable, as voltage or pressure.’

Got it?  Nick explained it to me once, but I have no idea what he was talking about.  Let me put it this way ~ he’s an analog geek.  He is devoted to the Moog company, its history and its creator, Bob Moog.  My daughter (no slacker, she) is as well.  In fact, they both have Moog related tattoos on their bods.  I wanted to take pictures of their tats, but crazy circumstances (I’ll explain later) sidelined that idea.  Anyway, Nick has the Moog Company logo on his arm and Annie has the first “O” with the music symbol in it on the back of her neck.

Yeah….they’re devoted.  They loves them some Moogs.  …..and they had a show in Portland I was lucky enough to go to.  Sometimes Éva performs with them, sometimes not.  She, unfortunately, wasn’t feelin’ it this time so didn’t go.  She’s got a lot going on at school, so she’s a pretty busy girl.
Here’s part of our journey into Portland… 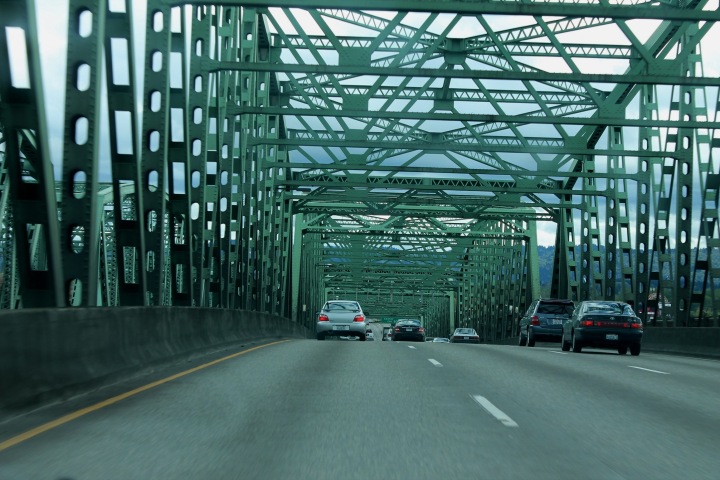 ←This chap is doing his part in keeping Portland weird.

Here’s Nick and Annie setting up →

Their good friend Bernie Worrell (from Parliament-Funkadelic, Talking Heads,  Colonel Claypool’s Bucket of Bernie Brains….. and The Volt per Octaves….. fame) signed one of their Moogs.

The DJ for the night was Zia McCabe aka DJ Rescue and keyboardist for the Dandy Warhols.  Alas, this was the best pic I got of her. 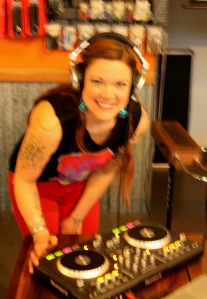 See? It’s all blurry and I suck!  Anyway, she’s a cutie and really sweet.
The show was great.  They absolutely rocked and it was a really good time. 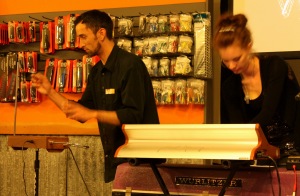 Here’s Nick using a Talk Box ~ one of those mouth things like Joe Walsh used in one of the best rock and roll songs since the beginning of time ~ Rocky Mountain Way.  Anyway, it’s cool and Nick sounded great!  ↓

Here’s my beautiful daughter singing with her beautiful voice.  Boy, I’ll tell ya, that talent skipped a generation!  (My mom has a beautiful voice, too).
Annie has written a lot of the songs the band plays and they’re really great songs!   ↓ 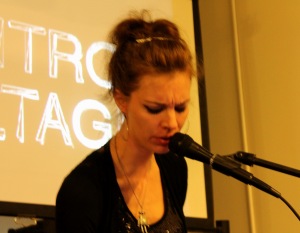 I’d mentioned earlier that I’d been unable to get a picture of Nick and Annie’s tattoos because of ‘crazy circumstances.’  Well, the crazy circumstance was that Nick’s lung collapsed.  Yeah, that sorta took precedence.  It was so scary and he really suffered a lot of pain.  But, he was taken to the hospital and, after a a couple of false starts (long, painful story), he’s doing much better.  Yay, Medical Science!!
Also, I mentioned that they lived in Vancouver…..they’re in the process of moving right now and will be heading out of town in just a few days to Asheville, North Carolina because Nick got a great job there working for ……..MOOG!!!  That’s right, his dream job with his dream company!  We’re all so happy for him.
All in all, it was a wonderful visit with my wonderful, warm, talented, generous, funny family.  They’re amazing and they rock……and if you want to learn more about The Volt Per Octaves (and I know you do….), visit thevoltperoctaves.com

I had a wonderful time with my wonderful family.  Some really great talks with my daughter, too.  My plan now is to stay here in Sacramento with my son Paul and his family ’til the end of this month then go down to So Cal to visit with my oldest son, Joe and his family.
Then….. on to Turkey…or rather Türkiye.  I’ve actually got a job there already!  More on that later.
So, last but not least, here are a few more pics from my time in Vancouver (sure wish I’d got more pics of everyone)……