Okay…so,…my first attempt to enter a post in this blog completely by myself without my son holding my hand went totally haywire.   I had entered some text, then I wanted to insert a couple of pictures and figured out how to do that, but ended up inserting them in the middle of a sentence and realized I probably had left the cursor in the middle of the text and that’s where “it thought” I wanted the pictures inserted (though “it” really should have known better), so I deleted the pictures and tried to move the text back into place, but ended up deleting the entire text instead and…..so I’m starting over.

I was talking with my son, Joe and told him about an art project I’ve begun working on.   After telling him about it, he said, “Why don’t you blog about it?”   Oh, yeah!   A while back Joe had set up my ziggySeamstress website and this whole really cool Word Press blog thing (good grief, maybe someday I’ll get the terminology  – I’m hangin’ in there) but I’d never done much of anything with it because – can you tell? – I’m not terribly computer savvy.  No, really.  But, I’m giving it a go.

The aforementioned art project is this:  A good friend has asked me to paint images of vegetables on 4′ x 4′ plywood sheets to hang on the fence around his back yard.  I’ll be using only two colors: a mossy green and white.  The green is the background color and the white is for the vegetable shapes.  Now, being that there will only be two colors, the shapes I draw will have to be sketched out in terms of positive and negative – as in a block print.  I’ve made and worked with block prints before and have enjoyed it enormously, so I’m excited to begin this project.   Here are pictures of the two sketches I’ve done so far (….okay, the cursor is NOT in the middle of the text….check): 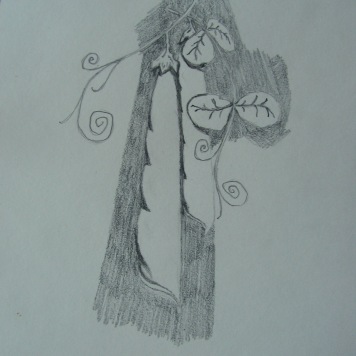 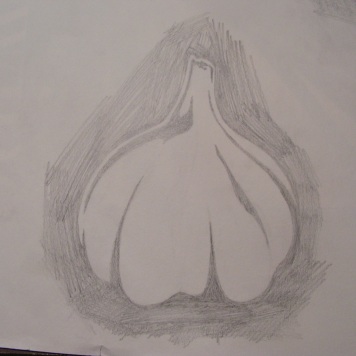 Hey, looks like it worked!   Yipee!   Does the idea of the positive/negative colors make sense now?  The dark color in these pictures will be the mossy green and the lighter color will be the white.   Mike (said good friend) is working on painting the plywood panels the mossy green.  I got a call from him today saying he thinks it may be a little too light colored.  So, I’ll have to take a look at it next time I’m at his house to see if it’s a problem.  We may need to go back to the paint store and see if we can get a bit of an adjustment toward a darker green.

So, there it is – my first official blog.  I’ll update from time to time as this art project progresses.

….now, I gotta go call Joe and tell him I blogged!